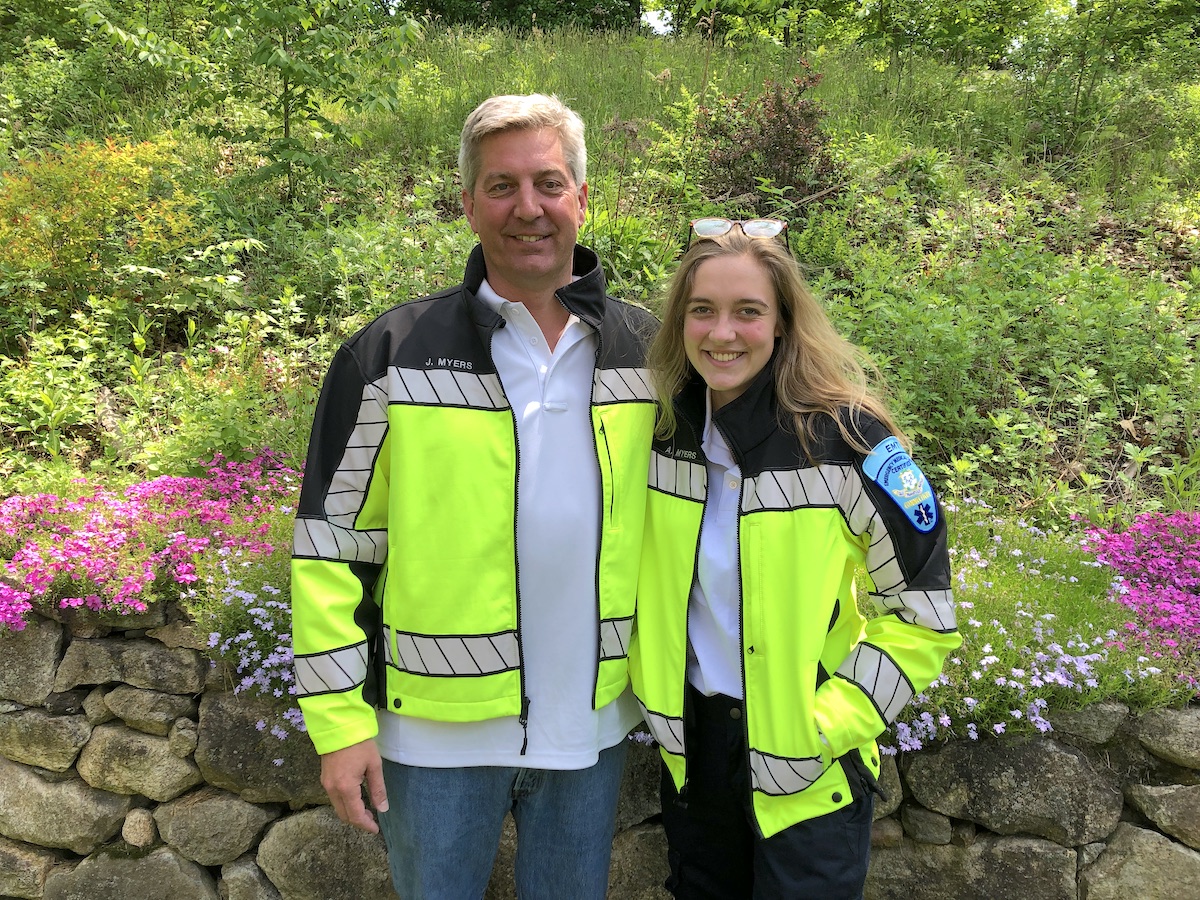 While most teenagers stress about the consequences of forgetting a homework assignment or missing the goal in a sports game, there is an elite group of students in Wilton whose consequences of failure are much more grave. The high schoolers that serve on Wilton’s Volunteer Ambulance Corps (WVAC) push petty homework worries to the back of their minds and the lives of their patients to the front during their time on call.

Eighteen-year-old Alex Myers and her father, John Myers, are two of the first responders at the Wilton Volunteer Ambulance Corps–and are undoubtedly the only set of father-daughter EMTs in town. Alex began training at age 16 when she was interested but unsure if she wanted to pursue a career in medicine. She joined WVAC  in December of 2017, a year after her father, and now plans to study neuroscience at Middlebury College this fall while volunteering at the local hospital.

Alex and John describe the process of becoming an EMT as an arduous one that begins with 150 hours of classroom training at the expense of about $950. They explain that although the cost is steep, WVAC reimburses students after one consecutive year of volunteer service.

Before joining WVAC, potential EMTs must pass two sets of written and practical exams for both the class and the state of Connecticut. Alex admits that the process can involve excessive waiting time but is worth it for motivated students. Volunteers often joke that, “The test to become an EMT is whether you can navigate the process to become one,” referencing the fact that only a few students from each training class complete all requirements and have their volunteer applications accepted at WVAC.

Hannah Bracken, a high school senior and volunteer EMT since Nov. 2018, is living proof of how tough those odds are. She was the only one out of the 23 students in her particular training class to actually become a volunteer at WVAC.

Bracken attributes her success to the help she sought and received from experienced Wilton EMTs and recalls keeping close contact with her class instructor and sitting down with the Myers, her family friends, to navigate the not so user-friendly websites. Bracken advises hopeful volunteers to maintain their connections–and their perseverance.

“Stick with the process. I knew my hours of training and testing wouldn’t be worth it if I gave up.”

Still fairly new to the scene, Hannah looks forward to answering more complex calls in which she can apply her skills learned and gain experience.

Their training prepares them for situations like terrorist attacks and emergency births, but a majority of the cases that Wilton EMTs respond to are less serious and require skills more social than medical. Volunteers at WVAC most often respond to calls from fallen seniors and are responsible for calming them down during the stressful ride to Norwalk Hospital.

“The best part is when we can make a measurable difference in the 15 minutes that we have,” Alex says, before her dad, John, chimes in–”usually that’s making them smile.” EMTs must create some emotional distance between themselves and the patient in order to operate effectively, but Alex has found that a sense of humor is necessary on scene and in the ambulance–for both the patient’s sake and her own. Drawing this fine line between humor and seriousness is an acquired skill that may be difficult for some teenagers who struggle with emotional maturity.

When asked how patients react to young EMTs, Alex explains that, “people are calling us on the worst day of their lives” and the age of the person caring for them is the least of their concerns. She also jokes that since some patients have misinformed expectations for the first responders–that they’re glorified taxi drivers on one hand, or doctors on the other–the extreme assumptions tend to outweigh any age prejudice that may exist. John adds that age and experience aren’t always directly related and points out that his daughter, although much younger, has been on more “wacky calls” than he has, racking up credibility not with time served but with each call.

Alex has discovered other advantages of becoming an EMT at such a young age, and she not only has benefited from the  local demand for skilled babysitters, but attained an internship shadowing an Emergency Care Physician at Norwalk Hospital. Although her hours are unusual, working the night shift from 11 p.m. to 3 a.m., she is grateful for the experience.

“In this day and age employers are looking for experience and as a young person that’s hard to get. This is direct experience that will put me ahead of my peers when I go into the medical field”.

Both Alex and Hannah agree that at WVAC they are treated as equals to their elder members and encourage young Wilton high schoolers to volunteer. Six of Wilton’s nine high school EMTs will graduate in June, and they look forward to seeing new volunteers fill their shoes when they leave for college this fall.

To learn more and to sign up for EMT classes in Wilton visit the Wilton Volunteer Ambulance Corp.