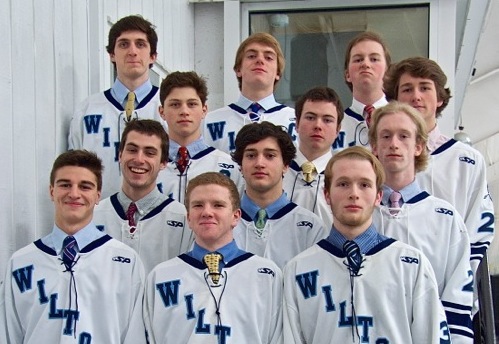 The following tribute article was contributed by Rick Thomas from the WHS Hockey boosters.

The 2014-2015 Wilton High School boys’ hockey season will go down in the books as the one with 12 great seniors. These 12 young men bleed Wilton Blue like no others. While stats are often recited in sports columns or online, catch a game or practice in person and you’ll be glad. Don’t miss 2015 Senior Day, held on President’s Day (No School), Monday, Feb. 16, at 2 p.m. at Winter Garden Arena (vs. East Haven).

The team’s three captains you may know on sight (Christian Hansson, Jameson Hill and Kyle Jonas), but they are first to remind us that it’s a team game. To the casual fan, hockey’s a blur when instant rivalries arise from a single check. For those who’ve seen endless games and practices – the skating and styles are as easy to distinguish as if you were a parent pointing out the differences between your own triplets. You just need to know how to spot a few things. As Coach Amero says “we have three official senior tri-captains that do a great job with team/game operations, but the reality is that we have 12 leaders with our seniors that all contribute in their own unique and important way.”  All twelve seniors are entirely dedicated to the “team” approach.”

When you see the quick reflexes, fast glove work and finely skilled movement in goal, you see Kyle Buckley (#30, 2nd year varsity). You know how sharp and keen his play is and you’ll marvel at the shots he turns away. He has come up big so many times with blocked shots or snatching pucks out of the air it is hard to count (but of course we do and it is staggering!). As the play heats up and the shots come, watch Kyle rise to the occasion against the odd man rush, the power plays and stopping the pivotal penalty shot! Watch for him & you’ll see Wilton hockey.

When you see great puck handling and a 20-something number moving fast with a lefty stick, you know its David Craven (#21, 3rd year varsity) or Ryan Emerson (#26, 2nd year varsity). You’ll see them moving the puck quickly with amazing ease, poise, and great skill. Watch for them as they speed up or down the wings but also keep watch for the laser pass setting up a goal. You are as likely to see them making huge plays in our own end as you are seeing their rifling shots and goals. There seems to be no play they don’t change for the better. They have a range of gears you must not miss. Watch for them & you’ll see Wilton hockey.

If you have seen a senior’s red jeep at the rink at 5:30 a.m., it’s likely Jake McCully (#15, 2nd year varsity) or Luke Rizzo (#8, 2nd year varsity). The WHS Hockey sticker means McCully and the Ranger’s license frame means Rizzo. You will know these two quickly but so should their opponents. They are hard charging, fast wingers always looking to mix it up with any opponent or previously immovable object. Watch for them but also keep an eye and ear out for opponents about to know them very soon because of their relentless checking and nose for the puck. Watch for them & you’ll see Wilton hockey.

When you see the tall and lanky speed and quick stick handling with fierce and relentless drive, you know its Ned Zawislak (#27, 3rd year varsity) or Elliot Lipner (#16). They are tenacious with their attack and effort. Watch closely:  in a blink of an eye they’ll rob their opponent of the puck and be off on a rush with a stinging wrist shot, wicked dangling move or back helping on defense denying shots. There is no shortage of devotion to our team or the play at any time, no matter the circumstances. Many an opponent has regretted not keeping their eye on them and don’t let it happen to you. Watch for them & you’ll see Wilton hockey.

When you see the dazzling back skating cross-overs with acceleration, you know its Mark Donohue (#11, 4th year varsity) or Kyle McCormick (#20, 3rd year varsity). You will not likely see more fluid cross-overs, smoother pivoting and sharper turns from any opponent. They are gritty, hustling and fierce never-say-die competitors making every day a bad day for the other side. Watch for contested pucks, put your money on these two every time–no matter the size of the other guy. Watch for them & you’ll see Wilton hockey.

You’ll always see Christian Hansson (4th year varsity) leading and encouraging the team each and every practice and game (even without lacing up due to injury). His presence, and more importantly his impact, can’t be measured. Watch for him & you’ll see Wilton Hockey. You’ll see Jameson Hill (#3, 4th year varsity) stepping up into the other team’s best player (and every player), breaking up the opponent’s rush and stealing the puck. Watch for the ensuing charge up ice through the teeth of the other side for blistering slap shots or nasty moves for lighting wrist shots. Watch for them & you’ll see Wilton hockey.

You’ll see Kyle Jonas (#19, 3rd yr varsity) winning face-offs, leading rushes, back checking and stealing pucks, slicing backwards with the puck into the high crease while ripping dazzling shots and lighting the lamp. Watch for his constant movement and ability to find the open spot for the instant catch and snipe. Watch for him & you’ll see Wilton hockey.

Most of all, come see your Wilton Hockey seniors!

Coach Brett Amero beams when he tells you these seniors and this team “have pride in playing for Wilton,” and that they have represented the Wilton community to his highest expectation. They respect and look after one another, and most importantly, as assistant coach Kevin Turbert often says, they are individuals of tremendous character. “A coaching staff could never hope for an opportunity like this.”

Finally on our side at all games (home and away), you’ll see two fans with hair of roughly equal length, Wilton hockey hats and sharp, keen interest in the play and team:  you will see Mr. and Mrs. Shaw. They are two of the team’s most devoted fans and the parents of former WHS hockey player #4 Matt Shaw (1987-2003). Matt and his parents will forever be, in the hearts of the Wilton community, each Wilton ice hockey team, their parents, coaches, the juniors, underclassmen and this Senior Class of 12. Watch for all of them and  you’ll see Wilton hockey. Don’t miss this senior game, Monday, Feb. 16! Watch for … Blue White on 4!