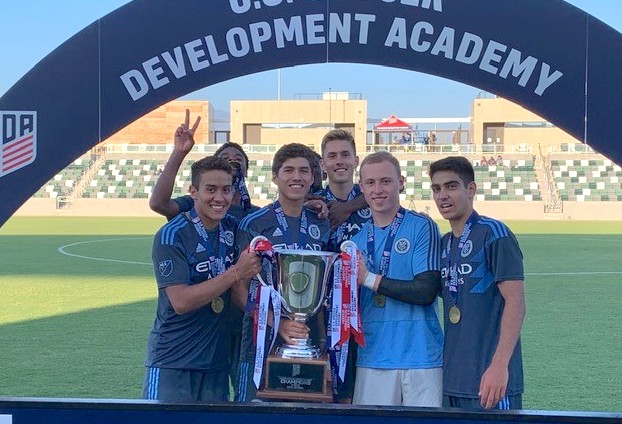 Two recent Wilton High School graduates, Nico Benalcazar and Cameron Farrar, are members of the NYCFC US Soccer Development Academy U19 team that just won the title of national champions–for the second year in a row. Benalcazar, a central defender and captain, and Farrar, a goalkeeper, and teammates defeated FC Dallas 2-1 in the National Championship game in Irvine, CA on Wednesday, July 10.

The US Soccer Development Academy is comprised of about 100 elite teams across the country with a  year-long season culminating in a World Cup-type playoff with the best 32 teams. The number seven seed going into the tournament, NYCFC went 2-1 in a tough group stage to win the group on goal differential. They then beat Crossfire FC from Seattle in the quarterfinals and Sockers FC from Chicago in the semifinals before taking on the number one ranked offensive team FC Dallas in the final. A thrilling game ended 2-1 with NYCFC victorious when the final whistle blew. The boys must have watched the Women’s World Cup games when one of the players celebrated a goal in homage to Alex Morgan’s now famous “tea cup” celebration.

Both boys’ commitment to soccer began locally as players with the Wilton Soccer Association before playing for local Premier clubs Beachside and Everton America (recently rebranded as Inter Connecticut). They then joined the MLS club NYCFC’s Academy program and committed to a grueling practice and commuting schedule at their St. Johns campus in Queens, NY.

Both Wilton boys will continue their soccer careers in college next year–Benalcazar will play at Wake Forrest and Farrar will take the field at Rutgers University.