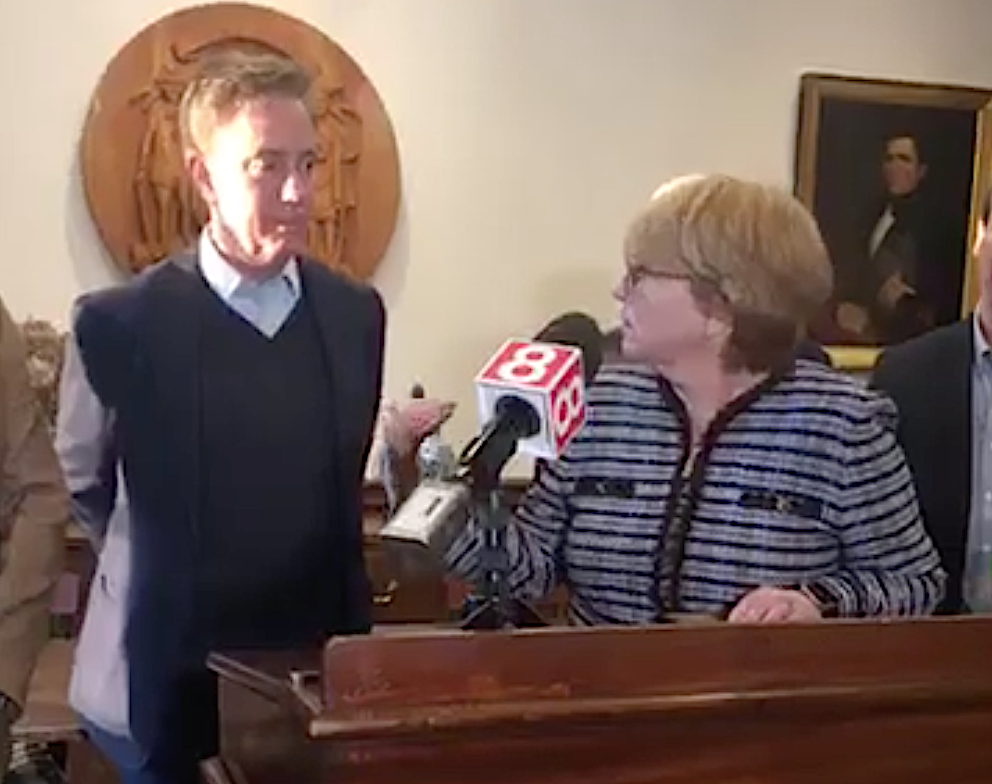 Wilton’s First Selectwoman Lynne Vanderslice had a phone meeting with critical members of Gov. Ned Lamont‘s staff on Tuesday, Mar. 5, and she says that based on that discussion, she expects at least one major change to the governor’s school regionalization bill, SB 874–a change that will make the bill no longer apply to Wilton.

As the governor promised after he met with Fairfield County town leaders last week, he had his top staff get in touch with Vanderslice to arrange the conversation. Vanderslice spoke with Lamont’s Policy Director/Deputy Chief of Staff Jonathan Dach and Director of External and Constituent Affairs Marc Bradley. They confirmed that what Vanderslice had pointed out to the governor about a section of his bill was indeed an error.

The bill as originally written contained language in one section that would have impacted Wilton:  Section 5 (b) details three criteria–population size, number of students, and number of elementary schools–that, if a district meets ANY of those criteria, it would be required to share a superintendent or lose funding from the state equal to the cost of the superintendent. When Vanderslice read the bill she noticed that Section 5 (a) contained three similar criteria, but with a difference–a difference that turned out to be a drafting error.

“One had to read (b) carefully because Sec 5 (a) also lays out three similar criteria, but in that section the district has to meet all three criteria for the language to apply. If you skimmed (b) after reading (a), you could have missed the distinction. At the Weston press conference with the Governor, I referred to what I thought were “errors” in his bill–probably not a good word choice especially when standing next to the Governor–but in this case it turned out to be exactly the case,” Vanderslice explains.

By working with the governor’s staff, Vanderslice says, that error will be corrected; now Wilton, with two elementary schools, will no longer be impacted by Section 5 (b). She believes it will also no longer apply to Weston, and the catch will likely wind up exempting several other districts, although she’s not sure exactly which other towns will no longer be affected.

The call was productive on other areas as well, she adds.

“I shared more details on suggestions that would be impactful for towns and Boards of Education and they shared the rationale behind some of their decisions. It is fair to say that we all came away with a better understanding of each other’s perspective.”

One other thing Vanderslice brought to the conversation and conveyed to the governor’s staff was a perspective she gained doing research for the meeting.

“I was forced to be prepared, which in my case typically means being over prepared. Instead of just reading newspaper accounts of the work of the transition committee on shared services, I tracked down and read the actual report. The report included links to some very useful resources, including a toolkit of regionalization best practices within Massachusetts. Like, Connecticut, Massachusetts is comprised of many small, independent thinking municipalities. The report contains this very important line in its introduction:  There is no “one size fits all” model for sharing services. I very much believe this, but it doesn’t mean we can’t learn from Massachusetts. We don’t have to reinvent the wheel if something isn’t already shared in CT, we just need to pick up the phone and speak with our counterparts in Massachusetts,” she says.

Just like there’s no ‘one size fits all’ model, however, Vanderslice says taking the approach of ‘no regionalization whatsoever’ doesn’t work either.

“It is important to remind ourselves that shared services and regionalization are not flawed concepts. When implemented with resident buy-in, they can reduce costs and result in a fiscally stronger community,” she says.

One silver lining to come out of the fight over school regionalization legislation is that it’s created a more direct connection between Wilton and the governor.

“As a municipality, you want to be a successful partner with state government. These one on one or small group conversations are really helpful in making that happen. Of course, they aren’t going to adopt every one of my suggestions nor am I going to agree with everything they decide.  The important thing is to maintain a dialogue and try to be part of the solution,” says Vanderslice, adding, “Again I have to say how much I appreciate the Governor taking this concern seriously and providing me with the opportunity to speak with his staff about this and other matters.”