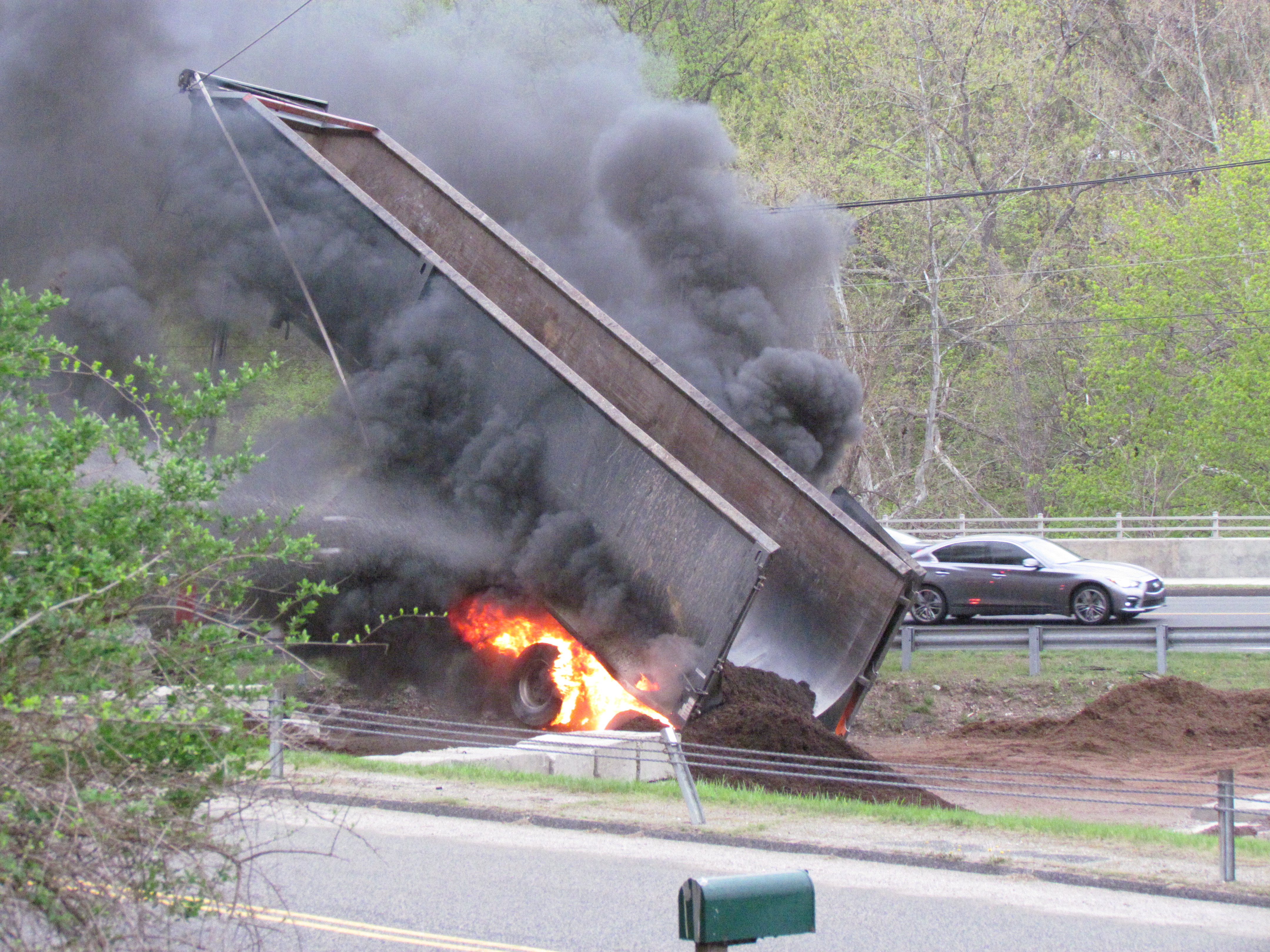 The explosive ‘BOOM’ first heard shortly after 8 a.m. on Wednesday, May 6, shook Wilton and signaled the start of a crazy series of events, eventually paralyzing traffic throughout Wilton and beyond all day. The noise was caused by a dump truck that raised its truck basket and hit the high voltage wires crossing above Gregory’s Saw Mill, sparking a fire and creating such a dangerous situation that Rte. 7 (Danbury Rd.) had to be completely closed to traffic between School Rd. and Ridgefield Rd. for most of the day.

GOOD Morning Wilton has obtained exclusive video shot shortly after the raised truck basket hit the wire and burst into flames, as well as footage of Wilton firefighters putting out the flames. In the first, the video, the driver can be seen jumping out of the truck cab, and trying to extinguish the flames before moving away to safety. Those videos are posted below, at the end of this article. To see the GOOD Morning Wilton photo gallery, click here.

It took a coordinated effort between Wilton Firefighters, Wilton Police, Wilton CERT, Eversource CT and Metro-North to perform a delicate operation to clear the truck from the wires and eventually allow Rte. 7 to be reopened. But that wasn’t before traffic through Wilton–and rippling into Ridgefield, Redding, New Canaan, and Westport–was significantly disrupted, causing backups on surrounding roads and creating havoc at school dismissal time.

Lucky to Be Alive

Dump truck operator Carlos Cruz was delivering a load of mulch to Gregory’s Saw Mill, when he realized that he hit the wires above as he lifted the basket of the truck to unload the mulch.

“It just started sparking. I was looking back and I could see the sparks. I tried to put the thing down, and I didn’t see the wire up there. I brought it down, and I was like, I’m not doing the right thing. I was trying to back out but the [mulch] pile didn’t let me back out, so I was stuck,” Cruz explained to GOOD Morning Wilton, just minutes after he leaped from the cab of the truck to safety.

The bang was the rear tire of Cruz’s truck which exploded as the current traveled from the wire through the truck’s metal body to the ground. “My heart is racing,” he said.

He’s lucky to be alive, according to first responders at the scene, who said Cruz did the right thing getting away from the truck quickly. “Safety first. Trucks are replaceable,” one of the firefighters on scene told GMW.com.

What also worked in his favor was the wire his truck actually touched. The high voltage wires which hang high above Rte. 7 carry two different levels of current:  those strung on the western side of the towers hum with 13,000 volts of electricity, while those hanging on the eastern side carry a much more powerful surge–115,000 volts.

Cruz’s truck hit the lowest-hanging wire on the low-voltage western side; he might not have gotten out if he touched the high-voltage line on the other side.

The power in the line he did hit was still powerful enough to be dangerous, and Cruz’s reflexive jump out of the truck cab was also a lucky stroke. “If the driver had made contact with the ground and the truck, he could have easily been killed,” said Wilton’s Lt. Tom Cassin, who was acting Captain at the scene. “He had the sense to jump out.”

Even though Cruz appeared to have been uninjured during the accident, Eversource representatives on site insisted that he be evaluated and taken to the hospital out of precaution.

“They’re experts in electrical things. Their policy is that even if you don’t feel anything and you didn’t get hurt, you need to be checked out, because it can mess with your heart’s electrical system. So the driver had no problem doing that,” Cassin said.

Luck for Everyone Else

Wilton firefighters took special precautions themselves because of the live power situation. “With the smoke we couldn’t see the wires initially, but when we saw wires involved, we switched to a large caliber line to keep the crew members away from the fire,” Cassin said.  They stayed on scene even after the flames from the tire fire were put out.

What’s more, the power line that the truck hit was damaged but didn’t break; if it had, the live wire might have hit cars on roadway below, just at peak commute time on Rte. 7. Wilton firefighters made the call early on to close Rte. 7.

“That’s the main concern, the wires goes right across Rte. 7, if that wire comes down,” one firefighter told GMW.com.

Complicating things even more was that the truck bed was hooked onto the power line, threatening to snap it at any point and continuing to conduct the electricity.

“The driver told us he tried to bring the bucket down. When he did that it may have loaded the wire to the point that there’s no room for them to simply pull the wire out,” Cassin explained. “If the wire breaks all bets are off for how long it will take to fix.”

That made the question of how to safely deal with the situation even more difficult. Until a solution was worked out, Rte. 7 had to remain closed.

That delay in making sure everything was safe meant that traffic had to be rerouted too. Cars were backed up in both directions on Rt. 7 as well as Ridgefield Rd., and traffic came to a standstill on side streets fanning out from Wilton’s major roadway artery. This impacted both arrival times for children going to school in the morning, and made the dismissal times a even more chaotic.

Emails and robocalls sent from the Wilton Public School’s superintendent’s office told parents to expect delays–and were there delays! Social media, including Facebook’s Wilton 411, were chock full of reports of buses running as much as an hour or more late. Messages of people stuck on School Rd. only to get turned around were followed by posts of delays for people trying to drive into Wilton.

Wilton Taylor Rental, located just north of the Rt. 7/School Rd. intersection, made a comment on one GMW.com Facebook post about the traffic impact:  “Rte. 7 is a mess going south by us and the back roads that parallel 7 are equally slow. Customers are saying two hours from New Canaan and Norwalk to us.”

According to Mitch Gross, with Eversource’s media relations department, the lines had to be de-energized before anyone could get close enough to detach the truck from the wire, repair and remove the truck, and remedy the situation. Power needed to be rerouted to other substation transfer points before the line could be shut off, so that no customers in Wilton and beyond lost power. Until that could be accomplished, all responding crews–police, fire, and Eversource–had to wait before touching the wire or the truck.

That meant the road had to remain closed until the utility company could be sure that the wire was de-energized, and that the line wouldn’t break during the operation.

By 3:30 p.m. the crews had prepared everything, including wrapping a sling around the raised truck basket to hoist it upwards away from the wire if needed, and braces in place to catch and hold the power line if it snapped. But they couldn’t proceed with trying to actually remove the line until a scheduled Metro-North train passed by first. As soon as it did, crews got the signal to proceed.

By 4 p.m., the crews had managed to carefully dislodge the power line from underneath the edge of the raised truck basket and could begin repairing the damaged wires. Mechanics came in to replace the tires and figure out how to remove the crippled dump truck and traffic reopened on Rte. 7.