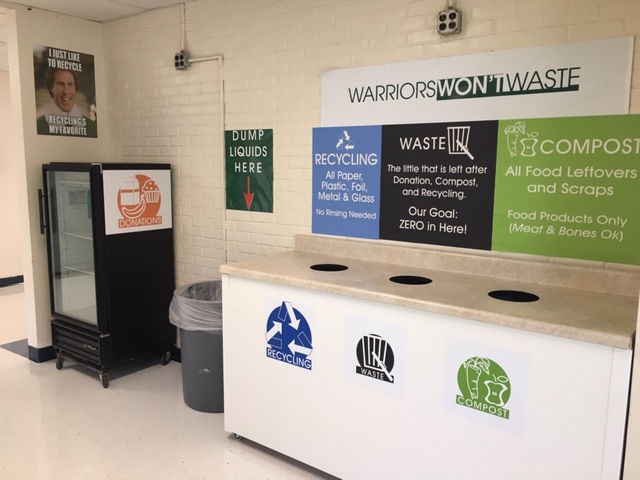 If you’ve ever seen a 12-year-old kid, you know that rather than walk up to a garbage can to throw something away, they’d much prefer trying to shoot it like they’re making a basket. That’s a problem when a school is trying to encourage recycling and good social habits.

“All these recycling bins have these tiny little holes on top for the bottles and cans. Kids want to throw something and they don’t want to have to go up and get near or touch anything that has to do with garbage,” says Heather Priest, who teaches culinary science and sustainability at Middlebrook Middle School.

Now, she’s  trying to get those same pre-teens to start thinking about garbage in a whole different way, by spearheading a Zero Waste School initiative that will start as a Middlebrook pilot program and eventually roll out to all of Wilton’s four schools.

Priest, along with fellow teacher Janet Nobles, has been growing the environmental and sustainability programs at the school, through the curriculum and after school groups. Priest started with increasing the amount of produce grown by students in the school garden and composting; Nobles leads the recycling club. During an audit with her students of the waste produced in the cafeteria, Priest discovered that the waste produced just at Middlebrook is an astounding amount.

“For every bag we would dump out, about 50% of the contents could have been composted or recycled. There was food that wasn’t touched, packages of crackers, whole sandwiches that were still wrapped. Just all these things, it was ridiculous. Then you learn how much is going to landfills. We did the math, and estimated it’s probably about 20 tons going to a landfill or an incinerator every year. And that’s just Middlebrook, and just the lunch wave. It’s crazy when you think about it. That’s just one school,” she says.

The Zero Waste pilot program beginning this fall at Middlebrook School will aim to reduce waste through food donations, composting, recycling and environmental conservation practices as students learn about and implement sustainable behaviors that they can then introduce at home, bringing the learning full-circle.

When Wilton’s 6th-8th graders walk into school today for meet the teacher, they’ll see some very different garbage cans that are just the starting point for an effort to reduce the amount of waste generated by the school, primarily from the cafeteria. Priest’s students have been involved in every step,

“We’ve completely transformed the cafeteria. There used to be about 15 garbage cans placed kind of haphazardly around. With the 6th graders, I really had them start to think about, “What colors do you want to see? What should the t-shirts look like? Why do people even throw these things away?” We started coming up with these ideas, like physical items in shadowboxes, that kids can see what they need to throw away and where, so kids know exactly what they need to do,” she says.

They also started rethinking the actual garbage cans, creating waste stations, with logos and graphics that they’ve designed and printed, with the help of Wilton resident Willa Ratner, who donated her time to develop a look and feel for all the compost and recycling bins.Posters also spell out exactly what goes where:  what gets recycled, composted, donated or actually thrown away. Their logo says, “Warriors Won’t Waste.”

As Priest explains, it’s meant to turn waste management into a destination rather than an afterthought.

“Hopefully now, instead of walking past a garbage can and mindlessly throwing something away, they can go up and have all of those things presented to them and make that choice.”

In addition to new, clearly marked waste stations that have been installed in the Middlebrook cafeterias, there are other elements of the program that have been put together:

Student Ambassadors will be on hand during lunch periods to help students better understand which items to recycle, which to compost, and which to donate to the food pantry. Miller-Driscoll will join in the pilot this fall with just the recycling component. Eventually, all the other Wilton Public Schools will implement the full range of program components as the program rolls out over the next two years.

Once it is fully rolled out, Wilton’s program will be among the most comprehensive among public schools in the state.

“It’s really, really scary and if it doesn’t work I’m going to be devastated!” Priest laughs. “No, really, it’s super exciting, it’s something I care so much about, and if it really happens–I’m a very visual person–all I see is 20,000 tons of garbage not going to an incinerator, that’s what I see. There’s also this great community feel to it, with people I’ve met and gotten to know through it have been phenomenal. Like the people from Curbside Composting. There’s a whole world out there for the ability for reducing the waste. It’s so exciting!”

Priest also says that the program has been embraced by everyone, from superintendent Dr. Kevin Smith to the custodians and Chartwells. The Zero Waste Schools program will be supported by an extensive educational effort that will reinforce waste reduction practices, such as better planning of packed lunches and improved recycling within classrooms. Following the introductory period, activities  will be integrated into the schools’ programs such as waste reduction competitions between grades and classrooms.

The program is a joint initiative between the Wilton Schools and Wilton Go Green, in partnership with Chartwells Food Service and Curbside Compost. It is supported by the Center for Eco Technology and Connecticut Green LEAF schools, through which Middlebrook school achieved Green LEAF status last spring. The Zero Waste program will help bring Middlebrook well along the path to eligibility for the prestigious national Green Ribbon School designation offered through the Department of Education.

The concept is something the students will integrate as they age up through the schools, with the program eventually becoming second nature. It’s also something that empowers kids, which for pre-teen middle schoolers, that’s huge.

“I was talking to the kids about composting and I was like, ‘This is one thing in this world that you have control over. So many of them have so little they have control over, this is the one thing they can actually fix.’ It was kind of like a light went on in their heads, that it was a big deal. ‘You can really do that, and you can be the first,’” Priest explains.