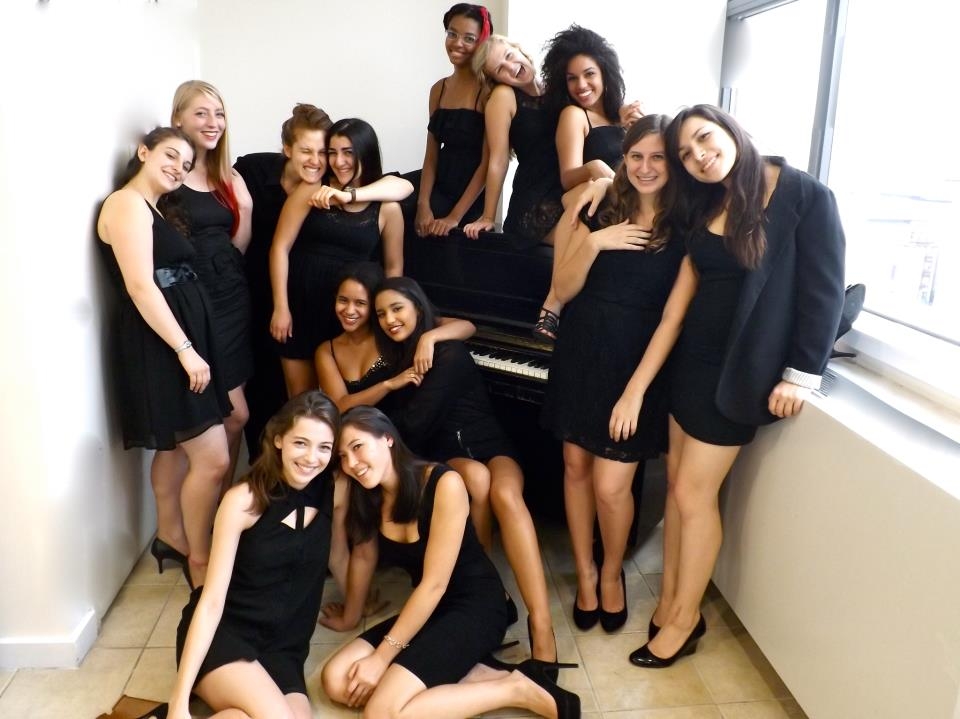 A capella music (“chapel music,” songs performed without instrumental accompaniment) has been around since the Baroque period, but it’s been given a recent boost in awareness by the hilarious 2012 movie Pitch Perfect (also known as the film that gave us the “Cups” song, for better or worse).

On Saturday, Feb. 1, three Wilton High School alumnae from the Class of 2011 will return home with each of their own college a capella groups for an evening of great singing to benefit The Wilton Playshop, “An Evening of A Capella.”  The groups, including The Barnard Bacchantae, with Katherine Rinaldi; The NYU Vocaholics, with Christopher Dehn; and The University of Connecticut Rolling Tones, with Lindsay Waack, will perform a wide range of music styles, ranging from artists like Etta James to Sufjan Stevens to Beyoncé.

Dehn, executive producer (along with his mother and Playshop board member Janice Dehn) and performer with The NYU Vocaholics, said, “I credit the Wilton community and school system for nurturing my interest in singing, so I couldn’t be happier bringing these college groups back to where my love for music began. That we are able to perform to benefit The Playshop–one of Wilton’s most beloved cultural and historical landmarks–is an honor.”

The WHS music tradition runs strong, and establishes a firm foundation for its students when they graduate and move elsewhere, something Dehn and the others acknowledge. “The three groups performing are just a small representation of Wilton High School graduates still actively involved in musical performance. Lots of my closest friends from the music department are involved in a cappella, and many others perform in marching bands, pit orchestras and choral ensembles on the collegiate level. We’re all interested in giving back to the Wilton community and hoping that more groups can come back and perform at the Playshop in the future.”

Dehn’s mother, Janice, was excited about the community connection between the high school grads and the town’s cultural institution.

“We are delighted to welcome three distinctly different a cappella groups, all from different colleges, with different styles and with different voices (one all-male, one all-female and one co-ed). What they have in common is that each features a Wilton High School grad, who met and performed together throughout their middle school and high school years. We view this concert not only as a benefit but also a celebration of Wilton’s fine music program and the students’ willingness to give back to their community,” she said.

Dehn echoed his mother’s statement, saying, “Katherine, Lindsay and I were in the first class to have [WHS chorale director] Betsey de Groff for all four years singing in high school, so we have this mutual attachment to each other. The three of us also performed together in the Madrigal Choir and theater and formed a really solid friendship.”

While the Wilton school district is arguably well-known to outsiders for its sports and academics, the caliber of its music and theater departments and faculty–as well as the availability of artistic pursuits for those students who are interested–is equally as impressive.  For teens who want to emulate Pitch Perfect‘s Anna Kendrick, or the cast of “Glee,” Dehn wants them to know that what you see on the screen isn’t much different than what musical groups are like in college (noting, of course, that no one has an apartment as big as Lea Michele’s “Glee” character does in Manhattan).

Dehn was just a freshman at WHS when the Playshop underwent its renovation in 2007, and he spent many weekends helping clear out the basement, painting walls and doing all other manner of work. He has also volunteered in many capacities and has performed on its stage as well.  “I always knew I’d want to bring my college group back there to see my roots, where I come from.  To see where it is now, the fact that the community really banded together [with the renovation] makes me so proud,” he said, in the true Wilton spirit of giving back and paying it forward.

Rinaldi, a performer with The Barnard Bacchantae, echoed her friend. “As a Wilton resident, I know just how important the Playshop is to the community. I’m thrilled to return with my own college a cappella group to be a part of this benefit concert. It should be a fun performance for everyone involved!”

The benefit will be crucial to helping the Playshop make some much-needed upgrades, according to Zelie Pforzheimer, president of the Playshop. “Funds raised by the benefit will help defray the cost of a new sound system to be installed before our next production, the musical, Little Women.”

Dehn promises a surprise or two at the performance – a “riff-off,” perchance?  As Pitch Perfect‘s Fat Amy would say, “It’s a capella (expletive removed)–get used to it!”

Tickets for the Feb. 1 acapella benefit are $25 for adults, $20 for students and seniors, and can be purchased by clicking here. Showtime is at 8 p.m. at The Wilton Playshop, 15 Lovers Lane.

The Playshop production of Little Women will run from Feb. 27 through March 15; all performances are at 8 p.m., except on Sundays, when performances are at 2 p.m..  Tickets may be purchased online, by calling (203)762-7629, by emailing tickets@wiltonplayshop.org, or in person one hour before showtime (depending on availability). As of this writing, opening night  of Little Women is sold out.