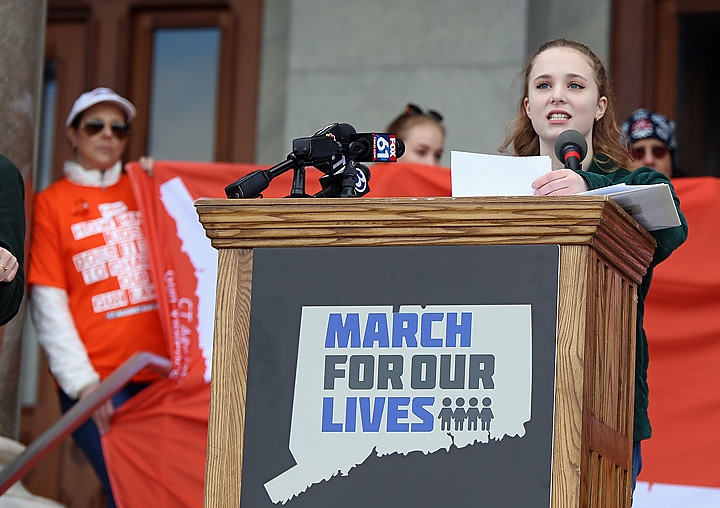 Wilton High School junior, Isabella Segall, founded the Connecticut chapter of Teens Against Gun Violence (CTTAGV) in February 2018 following the Parkland School Shootings. The organization promotes the belief that school should be a safe haven for learning and discovery, not a place where rising fear in students and faculty is a constant. CTTAGV leaders have committed to participating in the movement to combat gun violence both locally and nationally by educating people about state and federal gun laws, advocating for political representatives who support gun control, and rallying for better gun safety.

Segall is planning an upcoming Town Hall Meeting to continue the local conversation about guns. The meeting will be held on Saturday, June 9, in the Little Theater at Wilton High School, starting at 12 p.m.. GOOD Morning Wilton senior intern Shelby Connor asked Isabella some questions about the event.

GOOD Morning Wilton: Who is encouraged to attend this meeting?

Isabella Segall:  Everyone is invited to this meeting—adults, teenagers, and not just Wiltonians!

GMW:  Connecticut Republican state senator Toni Boucher and her Democratic opponent Will Haskell will be in attendance. Will they be answering questions regarding their political platforms? Will the meeting be structured like a debate?

IS:  It is not a debate, instead this town hall will be a series of questions regarding gun violence in schools as well as other topics pertaining to the youth of today, with questions coming from the public as well as our board.

GMW:  Given that the event will be taking place at WHS’s little theater, how exactly did you acquire the space? Was it rented or was it given to you to use by the school?

IS:  The school is supplying the space for us.

GMW:  If the space for the event was given to you to use by the school, are there any particular guidelines the meeting must follow in regard to politics?

IS:  No, this is a political event by nature–it is in no way related to Wilton Public Schools, though they were kind enough to lend us the space.

GMW:  Can you tell us more about the actions CTTAGV has taken to combat gun locally and nationally since its conception in February?

IS:  Since February, CTTAGV has been working hard in the community and the state. We started with a rally in [Ridgefield’s] Ballard Park, where politicians such as Congressman Jim Himes showed their unwavering support, while the community shared its concern for safety in our schools. Next, we held an informational meeting where we educated the public on bump stocks and ghost guns and we sent letters to our state representatives. CTTAGV also spoke with the French International Press which broadcasted to over 30 million listeners. I was one of the speakers at the Hartford March For Our Lives where over 15,000 people attended, and board members Emily Kesselman, Avi Jarrett, Rachel West, and Grace Bracken also joined me to represent CTTAGV. GMW:  What is in store for the future of CTTAGV? What is the organization’s next step in helping combat gun violence in Wilton and beyond?

IS:  After this town hall, we hope to have more meetings that include anyone who is passionate about gun control. We want this group to be statewide, and hopefully one day nationwide! Along with that, on June 24, I am attending the Blue Wave Fest in Chester, CT to promote CTTAGV and share the message.

GMW:  What are your hopes for this town hall meeting?

IS:  We hope to give the community an opportunity to get real answers from their local politicians. We also want to give the politicians a chance to tell us, the public, their candid answers on these pressing subjects.

GMW: Why is this event so important to you?

IS:  Because as a young person, it is so crucial my peers and I are properly educated and given the tools to vote smart and think for ourselves. This town hall will give us and our parents the opportunity to hear what the politicians have to say straight from their mouths.

For more information about CTTAGV, please visit the organization’s webpage.