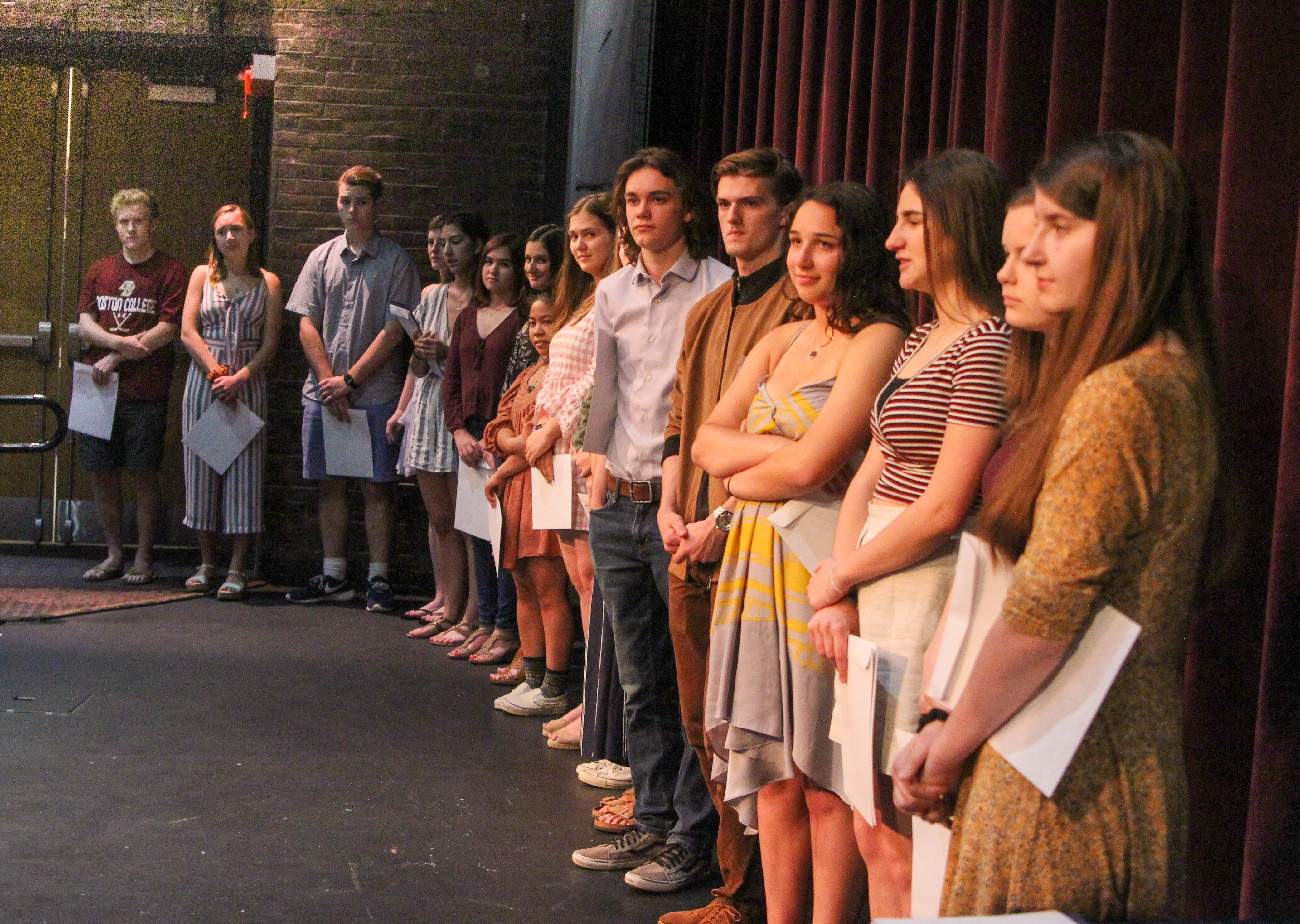 with additional reporting by Nicola Davies

Wilton High School‘s Fine and Performing Arts (FAPA) Awards ceremony annually recognizes nearly 80 high schoolers for their achievement in theater, music, and art. This year, WHS hosted the ceremony in the Little Theater on May 22, where teachers and faculty from Wilton High School, Middlebrook Middle School, and various community organizations gathered to honor the well-deserving students.

The AP art show reception kicked off the evening with a display of the incredible examples of fine art produced by the seniors. These photographs, paintings and sculptures would look at home gracing the walls of any professional gallery.

Awards were given to students by teachers and representatives from town organizations including Wilton Children’s Theatre, Weir Farm, The Greens at Cannondale and the WHS PTSA.

This is a moving evening for all involved as the teachers celebrate how far the students have come and what they have achieved. It was clearly evident that the teachers are going to miss the seniors that they have watched blossom over four years. English and theater teacher Heather Delude summed up what many of the teachers felt, sharing how proud she is that one of her students, Ava Kaplan, is following in her footsteps and attending the University of Florida on the same course that she graduated from 20 years ago–the first of her students ever to do so.

The teachers presenting awards all echoed the message that none of the students’ accomplishments and opportunities would be possible without the support of Wilton’s district and administration, and their appreciation for the arts and the role it plays in the lives of our students.

“Every year lives are changed by this program thanks to them,” said Marty Kozlowski, who produces the stage productions at WHS. “We also are blessed with a dream come true in our professional staff–passionate, committed and talented people who are able to create art on our stage.”

“It is wonderful to see all these students who chose to make the arts a part of their educational program,” added Nick Loafman, instructional leader for music at the High School. “In a place like Wilton they have so many good choices about how to spend their time, so the fact that they all lived such a devotion to the arts is a great thing. As educators, we are all so happy that parents and families supported these choices, as their support is integral to these experiences as well.”

Each year, one student is awarded the prestigious Fine and Performing Arts Award Scholarship, for demonstrating exemplary dedication, leadership and passion for the arts for all four years. In order to win the sought-after FAPA Award, the student must be involved with at least three separate arts departments at WHS. The 2019 Fine and Performing Arts Award was presented to Alex Killian. He plans to study film production next year abroad at the Paris School of Arts through Emerson College.

The numerous other award winners are listed below:

The Art Awards with scholarships, indicated below, totaled to $4,000.