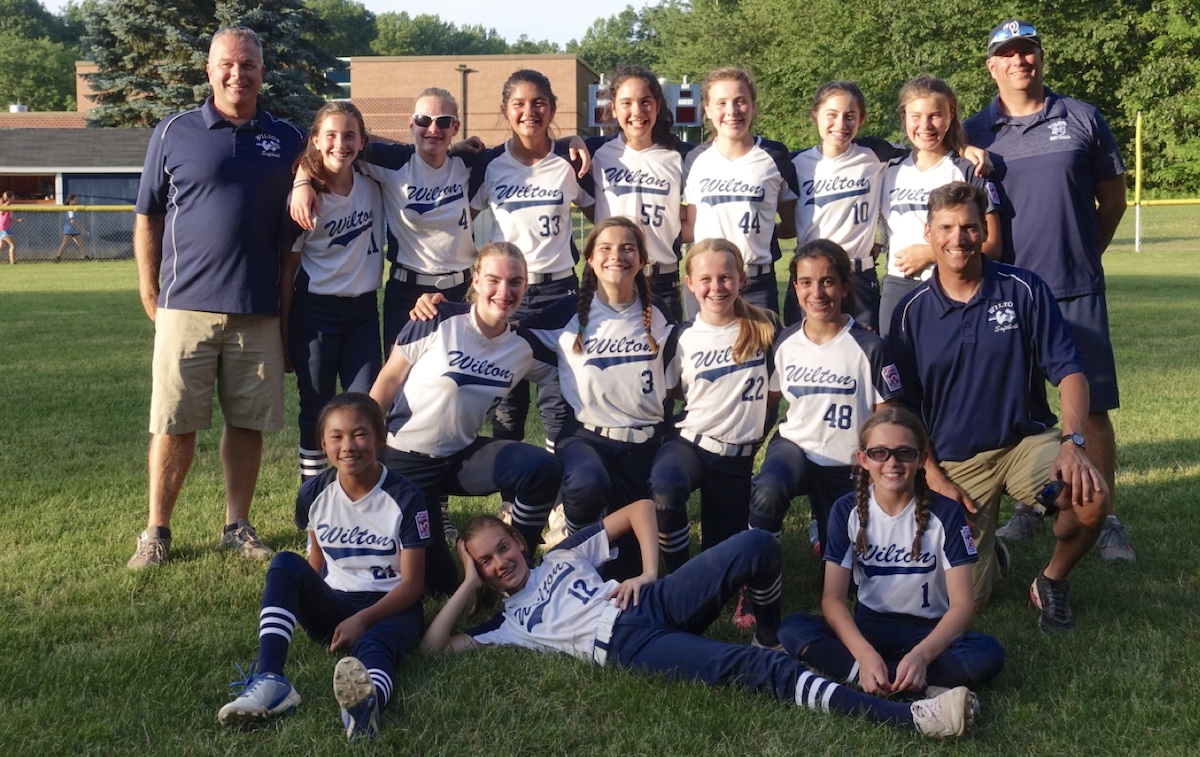 Connecticut’s District One 12U Softball Tournament, which began on Thursday, June 27, culminates in a rematch of the Game 1 opponents–Darien and Wilton–on Wednesday, July 3, at Middlebrook School in Wilton. The first three games of the tournament, featuring the 12U softball teams from Darien, New Canaan and Wilton, were competitive, hard-fought contests, and the tournament championship figures to be no different, as Darien looks to repeat as District One champions … and Wilton attempts to win its first District One championship since 2004.

Wilton came out of the gate focused and determined, edging Darien on day one by a score of 5-1, and defeating New Canaan on July 1 by a score of 9-2. Wilton’s coaches have preached pitching and defense throughout the tournament, and the Wilton players have responded.  Gracie DiBuono-Krafick pitched a complete game against Darien, surrendering one unearned run on two hits over six innings, striking out six. Feeding off of DiBuono-Krafick’s gutty performance, Lauren Davis dominated in her start against New Canaan, going the distance while allowing two runs (one earned) on one hit, striking out three.

Right fielder Abby Seeberger recorded a heads-up assist by throwing out a baserunner at first base in Game 1, left fielder Lauren Sanfilippo contributed a put-out in Game 2 on a line drive and, while not pitching, Davis and DiBuono-Krafick have made all the plays at first base. Eva Filipponi, who substituted in right field in Game 2, nearly made the play of the tournament when backing up an overthrow to the first baseman–she just missed throwing out the baserunner, who was trying to advance to second base.

Shortstop Sadie Klyver and catcher Katie Kelly have been their typically solid selves on defense, shutting down the Darien and New Canaan running games. However, they have both been key contributors on offense. Klyver has scored three runs over the first two games, getting on base in a variety of ways and continuing to put the ball in play. Katie Kelly has been the star of Wilton’s offense, leading the team with four hits and seven RBI over two games. The offense has also received key contributions on offense from Kate Rusin and Lucie Prior, who ignited a two-run rally against Darien, as well as from Abby Schwartz and Emma Kelly. Abby Schwartz has reached base in all three of her at-bats, while Emma Kelly has put the ball in play and advanced the baserunners ahead of her. Davis has also been a key contributor on offense, pacing the team with five runs scored.

Fans are encouraged to come out to Middlebrook on Wednesday, July 3, to support the Wilton girls as they attempt to bring the District One banner back to Wilton after 14 long years. Game time is 5:45 p.m.