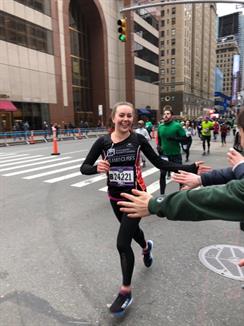 For many, the United Airlines New York City Half Marathon is a “bucket list” race. The 13.1-mile journey takes runners from Prospect Park in Brooklyn to Central Park in Manhattan. Along the way, runners cross the Manhattan Bridge, pass iconic NYC landmarks, and cut through Times Square on the way to a very exciting finish.

This past March, 17-year-old Wilton High School junior Caroline Hess lined up with more than 24,000 runners to take on the challenging distance. The wind beneath Caroline’s wings was Eileen O’Donnell Coogan, Caroline’s Nana.

In 2005, Coogan had been diagnosed with multiple myeloma, the second most common form of blood cancer with one of the lowest five-year relative survival rates of all cancers. While there is currently no cure, significant progress is being made. 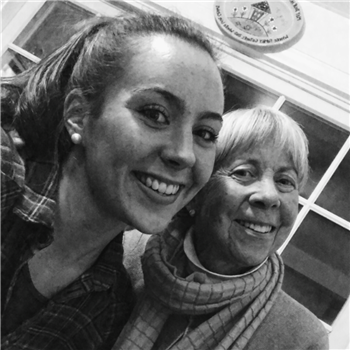 “Multiple Myeloma was something Nana dealt with but her focus never shifted from her family and her active lifestyle,” Caroline explained. “Nana always lived her life to the fullest. When asked about her treatment, she would change the subject and turn the focus to one of the upcoming family gatherings or sporting events.”

In November 2018, the younger Hess decided to take on the 2019 United Airlines NYC Half Marathon as part of the Multiple Myeloma Research Foundation (MMRF) Team For Cures in Nana’s honor.

“I have always enjoyed running. When my mom and I heard about the New York Half opportunity through MMRF, it seemed like the perfect opportunity to raise money for a foundation that’s so important to me and  my family while doing something I enjoy. When I told Nana, she was beaming with pride.”

The MMRF provided Caroline with some resources to help with getting ready. She followed a three-month training program, slowly increasing her running distance each week. Caroline admits sometimes it was tough to motivate herself to run in the cold winter months, but quickly realized one run in the cold was nothing compared to her Nana’s ongoing fight to beat multiple myeloma.

Frequent texts from her Nana inquiring how her day was going, plus the support from her family, kept Caroline in the game. “Nana actually called me during one of my 10-mile runs and talked to me for about half of it.”

On Saturday, March 16, the day before the race, Nana passed away surrounded by her husband of 52 years, Bob; her three children, Bernadette, Brendan, and Colin, and their spouses; and her 10 grandchildren–Caroline, Rory, Whitney, Brody, Henry, Gus, Reese, Tully, Mack, and Poppy.

The next morning Caroline made it to the Prospect Park start and ran the half marathon.

“There was never a moment that I even thought about not running,” Caroline recalls. “The last time I talked to Nana, I told her that she was the one giving me strength and that I knew she was going to be with me every step of the 13.1 miles. Lining up on Sunday consisted of a mixture of so many emotions. I was excited, nervous, overwhelmed, and tired from the previous tear-filled days.”

Bernadette adds she knows what kept Caroline going. “I have always said that my mom was the strongest woman I knew. It’s because of my mom Caroline is as tough as she is.” 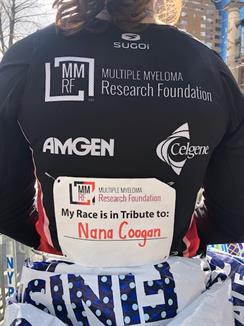 Caroline finished the race in under two hours, improving upon her Nana’s time of 2:13 from the Indianapolis half marathon in the 1980s.

“During the race, there was never a moment where I stopped smiling. It was an incredible experience to run through the city because I got to see it from a new perspective. There were people cheering and holding up signs which made me realize that I was a part of something much bigger than myself. There were thousands of people coming together to run for different causes and it was such an honor to be a part of the MMRF team.”

The half marathon was just the beginning of Caroline’s efforts to find a cure for multiple myeloma. With her Nana’s recent passing, she is more motivated to raise money for MMRF.

“Nana said, ‘Where there is love, there is a cure.’ I know that between the Coogan/Hess family there is an infinite amount of love, which I believe means that a cure is not far away.”

Readers interested in donating to the Multiple Myeloma Research Foundation in tribute to Caroline’s Nana, may do so online.