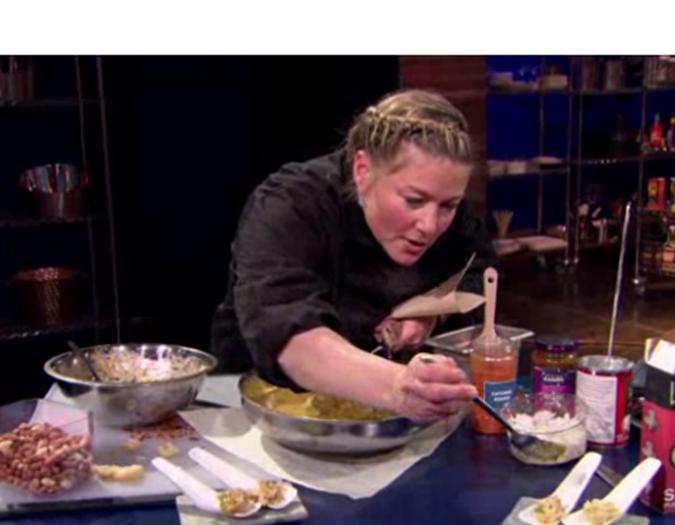 Food star Alison Milwe Grace has rolled the dice before and won, creating her successful, Wilton-based business, AMG Catering and Events. But will she beat the odds competing on the new Food Network show “Kitchen Casino?”

Grace, an accomplished chef with almost 30 years of experience in food prep and service, was game to compete on the show, which mixes luck, strategy and culinary skills. In the show, four chefs compete in three rounds of high-stakes cooking with a casino theme. “The three games we played were Roulette, Slots and Poker.” How does that mesh with cooking though? In the roulette round, for example, the entire kitchen spins like a roulette wheel, and the competing chefs have to start working on their competitor’s dish.

“That was the craziest round!” Grace recalled. Does that mean there was sabotage between chefs? Grace was sworn to secrecy by producers so that just means tuning in to see what happened, and to find out whether her gamble paid off. The show debuted earlier in April, and is hosted by Bill Rancic. Grace appears on the season’s third episode, airing Monday, April 21.

Wiltonian Olivia Savarese, who works with AMG as event coordinator and director of children’s classes, helped cheer Grace on before and during the taping of the episode. At the last minute Savarese handed her friend a lip gloss to tuck into her chef jacket’s thermometer pocket.

“She said, ‘put this in your pocket, if it’s the only thing you can have, just keep applying.’ So I applied constantly!” Grace joked, describing her uphill efforts at trying to stay TV ready in a high pressured situation coupled with working furiously behind a hot stove. “They’re gonna see the sweat!”

There was definitely pressure, as the players were competing for a pot of up to $30,000. But given her experience in the kitchen Grace knew she could hand whatever they threw at her.

AMG has been open in Wilton for three years, but Grace has owned the company for 18. “The business has grown, and we’re doing great events.” AMG is handling the May re-opening for the Ridgefield Library and recently catered a fundraiser at Trackside called “LOL for HLH, as well as juggles a jam-packed schedule of weddings, Bar- and Bat Mitzvahs, and other events. What’s more, not only do they manage all the preparation needs for their events from their commercial kitchen at 196 Danbury Rd., but they also run a full roster of cooking classes (for kids and adults) and in-house events.

“We do a lot of corporate team building, we love it. And we do that like ‘Chopped,'” Grace said, referring to another favorite cooking show. “I’m obsessed with the Food Network. I watch it all the time.” In fact their kitchen is set up with the metal food prep tables on casters so teams can roll them after getting their “mystery baskets” with surprise ingredients to challenge them. “We serve the participants family style after with everything they’ve made.”

It’s easy to tell Grace was in her element actually being on a Food Network show rather than just watching it on TV.

“I didn’t even realize I was cooking on TV, I was just doing it. It was the most incredible day of my whole life. It was so validating,” she said. “But it was also so emotional, because [during the taping] they kept asking what I’d given up to to do this career. It made me really realize what I had given up–I have three kids, and I’ve never seen them get on the kindergarten bus, I’ve never been into their classrooms, I’ve missed a ton of their games and recitals. It made me realize what I’d given up, but also that I was totally where I was supposed to be. I loved it!”

The show was taped back in January, and Grace hasn’t been able to talk about what happened until now. Even still she won’t give up a hint of what happens. “You just have to tune in!”