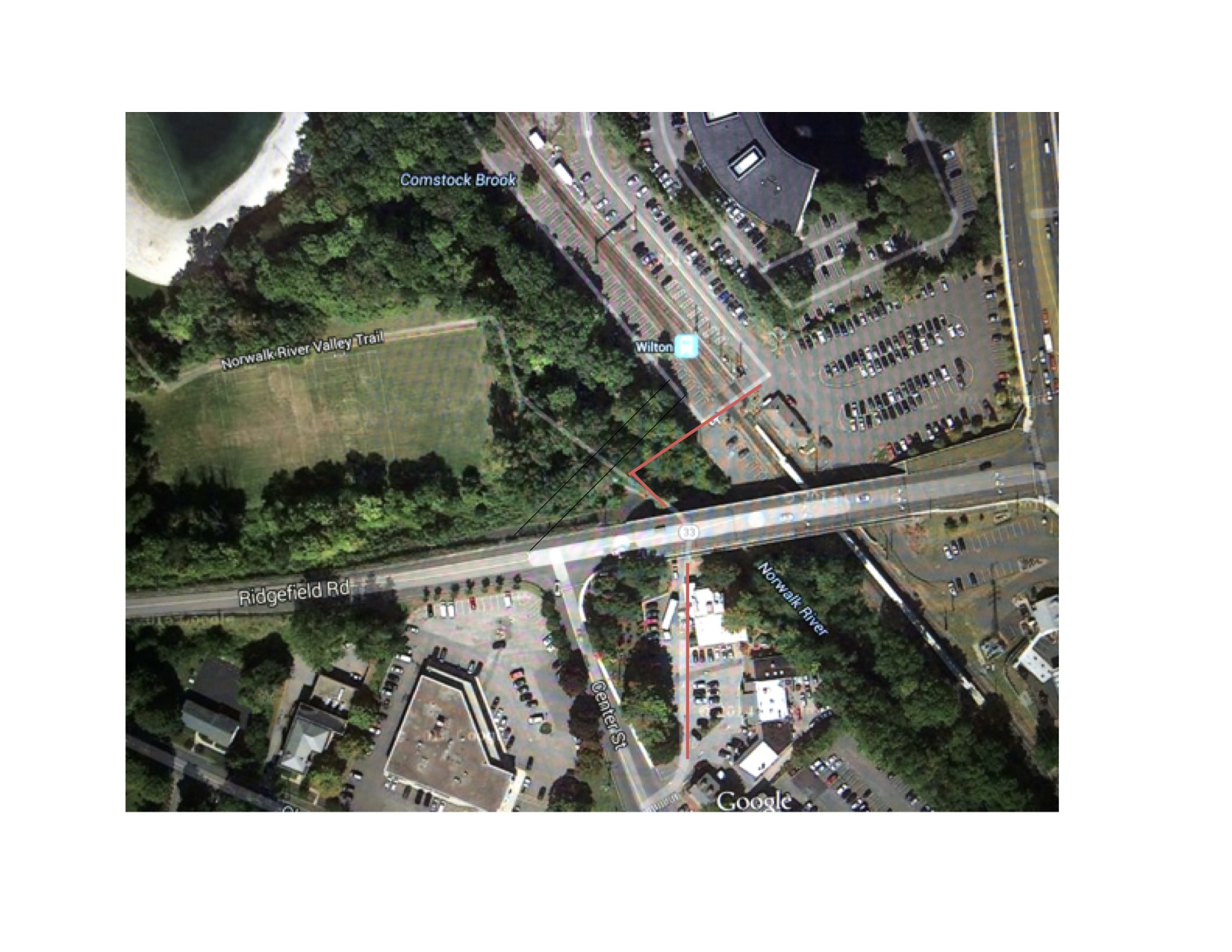 Wilton welcomed GOOD news on Monday, May 19, as the State of CT advised town officials that Wilton had been awarded a STEAP grant (Small Town Economic Assistance Program) for $500,000 for the Wilton Station Pedestrian Walkway Project.

According to First Selectman Bill Brennan, it was Wilton’s fourth time applying for grant money to find the transportation and economic development improvement project. “We are obviously delighted–two earlier DOT Transportation Oriented Development grant applications were unsuccessful with state funds going primarily to more urban areas in each case,” he wrote in an email to GOOD Morning Wilton.

The project will create a paved walkway and bridge over the Norwalk River to directly link the Wilton train station with Wilton Center. Until the walkway is completed, the only way for pedestrians to get to Wilton Center from the train station is to climb up via Station Rd. and Rt. 7 or through the parking lot on the south side of Ridgefield Rd. by the Gulf gas station and traverse the Ridgefield Rd. bridge–a much longer–and more unsafe–way.

In addition, the walkway will benefit tenants of Wilton Commons–most of them seniors–as well as people who work in the office building and use Trackside Teen Center near the station, giving them easier access to the shopping areas of Wilton. Champions of the plan at Town Hall have stated that such a pedestrian connector between the train station and the center of town will help Wilton attract more businesses whose employees use the train line and visitors who might come to shop, eat and do business here.

“Today’s success will be a great benefit to rail transit users, as convenient access to the station and village center will now become a reality.  There will be many winners when this pedestrian walkway project is completed,” Brennan said.

One GMW.com reader named Catherine–herself a self-proclaimed new resident of Wilton Commons–emailed us immediately following the news alert we released yesterday when news broke about the grant. “Wowee! …that’s terrific!” she wrote.

As for reaction from other readers to the news, the GMW.com Facebook page saw the following comments:

Other town officials agreed with the sentiment. Second selectman Hal Clark called the news “wonderful,” especially when it comes to being energy aware and environmentally friendly.

“Among other benefits, it will mean that many commuters, and those simply wanting a trip into the city, will be able to safely and by a shorter route walk or ride their bikes to the Wilton train station.  As such it can save energy and has, therefore, also been a goal of the Wilton Energy Commission.  Many thanks to the town employees and legislators who helped make this happen,” he said.

Brennan mentioned a concerted effort on the part of many in making the grant happen.

“Town departments contributed by developing the detailed plans and costs involved to support a credible application, especially  Bob Nerney, Director, Planning and Land Use Management, who articulately and skillfully rewrote each application submission. Wilton’s state legislators–State Senator Toni Boucher and State Representative Gail Lavielle–fought and negotiated  for equitable consideration of Wilton’s most recent application; a supporting letter was also obtained from Congressman Jim Himes, as well as from officials from the Wilton Commons senior residence. Collectively, all this effort paid off. I am very delighted and appreciative. Wilton works together, which makes good things happen to our wonderful community!”

The grant was a topic at last night’s Board of Selectmen meeting. Town planner Nerney mentioned that efforts would be made to make the walkway and accompanying signage appropriate and welcoming.