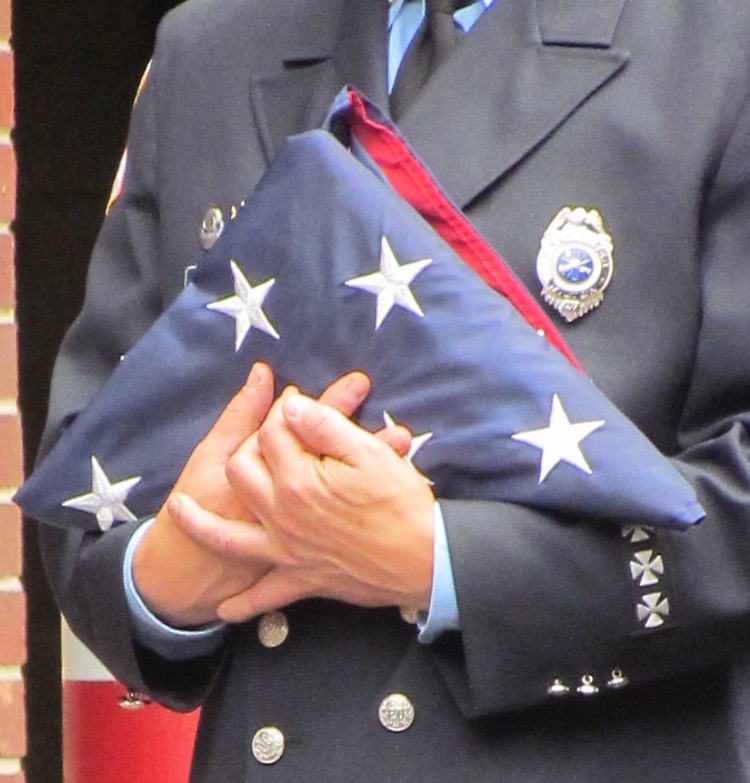 Always an emotional day, this year’s Sept. 11 Memorial Service hosted by the Wilton Fire Department was particularly moving and meaningful. Evident in the words of the speakers and the musical moments was a true reflection of very personal recollections and impact of that day.

Captain James Blanchfield of the Wilton Fire Department opened Tuesday’s Sept. 11 Memorial Service by recounting the numbers of 9/11:  2,606 people perished in the attack at the World Trade Center, 125 at the Pentagon, and 243 on the four planes; among those who were killed were 343 firefighters, 72 police officers, 55 military personnel. He added that since then, “…over 1,100 individuals who worked, lived or studied in lower Manhattan at the time have been diagnosed with cancer as a result of exposure to toxins at Ground Zero; in the fire service, law enforcement or EMS, over 1,400 9/11 rescue workers who responded to the scene that day and in months and years afterward have since died. And Wilton, we lost five of our own,” he said, naming Edward Fergus, Peter Fry, John Henwood, John Iskyan and Edward York.

But, as Blanchfield added, the ceremony each year puts faces and memories to the numbers, which makes the memorial so emotional and meaningful. And as speakers throughout the morning reinforced, it is in remembering and remarking on the personal stories and memories of specific individuals who died, who survived, and who carry on today that keep us united and moving forward.

“Today we consciously remember the events of those days, we bring them right back up so we can physically feel them, it’s important to do that, so we can remember. We remember those lost in our minds and our hearts. We choose as a community to never forget,” Blanchfield said.

He reminded the assembled crowd–one which several speakers remarked upon as being one of the largest in recent memory–that it’s easy for memories to fade as time passes.

“An example of that, of this department, only seven firefighters out of the 26 from those who were here in 2001, remain. All the officers from that time have since retired. And only Cathy Horn remains in our front office. I imagine it’s the same in your department or your points of employment,” he said. Wilton’s Fire Chief Ron Kanterman brought the personal home in his own remarks, with anecdotes he said he may have never shared with those assembled before. Throughout his career, Kanterman met and worked with many notable fire officials who were on the front lines on Sept. 11, and knew many who were lost. His most poignant recollections are the most personal ones–and as his Capt. Blanchfield said, puts faces and memories to the numbers.

“My brother-in-law, Tony, a lieutenant on Brooklyn Engine Company 239, was lined up at the mouth of the Brooklyn Battery tunnel. When they finally went through the tunnel there was Deputy Chief standing in the plaza as they exited. The Chief sent every other company to either the West Side Highway or to Broadway. Everyone who went left to the West Side Highway was killed. Everyone who went to Broadway lived. Tony and his guys were sent to Broadway. He married off his daughter last year and his son is a successful attorney. Tony is still working.

“My cousin Michelle, a VP for a world bank worked on the 90th floor of Tower 2, just about where the jet made contact. She got in to work every day at 7:30 a.m., made coffee for her secretary and got her day going. She was running late that day and came out of the subway to find the tower on fire at 9:45 a.m.. In 2005 the NYPD called her and asked her if she wanted her corporate MasterCard back which she kept in her desk. It was found in the Staten Island landfill where they sorted the wreckage. She’s married with 12-year-old twin girls and a 9-year-old son. The MasterCard is tucked away in a plastic bag in the top drawer of her dresser.

“When this all happened, I was the Fire Chief for Merck & Co. in New Jersey at their flagship facility which sits on 350 acres with bulk chemical production and research laboratories. We were insured by a company called Factory Mutual now known as FM Global. My account engineer took Tuesday, Sept. 11th off to spend with his son on his 10th birthday. His boss called him on Monday afternoon before and asked him to cover an early morning meeting on Tuesday with the AON insurance conglomerate on the 102nd floor of Tower 2. He never got home.

“Firefighters are innovative and can think on their feet like few others can. I spoke to Chief Ed Plaugher of the Arlington, VA FD a month after 9/11. He had been extremely busy commanding operations at the Pentagon that day. At one point, he looked around and watched two firefighters with battery operated saws in their hands cutting off the roof of their ladder truck. He didn’t even ask. It turns out, they couldn’t fit under the vehicle tunnel that would put them on the inside of the courtyard of the Pentagon so they simply cut the roof off the truck so they could get inside to make rescues.

“Radio communication was just about non-existent that day between the fire department units themselves. Commanders could talk to dispatch but walkie-talkies didn’t work inside the building. Going back to being innovative, most of the captains and lieutenants simply picked up a house phone and dialed the Manhattan dispatcher’s number, said where they were in the building and to relay that information to the commanders in the lobby. When they released the radio and phone tapes a few years later, I heard Capt. Patty Brown from Ladder 3 on the phone relaying his position in the building:  ‘We’re on 75 and heading up. Let the bosses know.’ Patty was a golden gloves boxer and a classmate of mine at John Jay College in the 1970’s. Patty took care of his best friend’s family, the widow and five children of Capt. John Drennan after John died in a fire in 1991. When I saw Vina Drennan, John’s wife, shortly after 9/11, the only thing I could muster up to say to her was, ‘…and now Patty.’ She looked at me and said, ‘Patty and John are together again,’ and gave me that Vina Drennan smile. This woman, who suffered a double loss in 10 years made me feel better. Some people have amazing resilience. First selectwoman Lynne Vanderslice read the poem, “If They Could Speak,” and said what it expressed reinforced “…why it’s so important that we have today and every year we remember.” The stanzas below beautifully reflect the ceremony’s overall theme of remembering who was lost and keeping those memories alive.

“Do not grieve and linger in the shadows of graves.
Go out into the sunshine and tell everyone that I was here.
Let our enemy know that when we were together we lived, and worked and loved.
And though I am gone, you will carry on for me because you must.

“Tell my family how much I loved them and still do.  Remember the good we shared, the life we created, and
walk forward with noble dreams. God can’t fill a shattered heart or a clenched fist.
Let fear die and let love flow again like a river.

“So as the smoke rises high above the ash, gather all your strength and rebuild something new, something better.
It’s not impossible.  It’s essential.  It’s what I would do for you.” Rev. Reggie Norman, the pastor at Our Lady of Fatima, offered a blessing, but broke with tradition and offered a personal note about Wilton’s own firefighters. His words struck a chord, reminding listeners of the willingness first responders make to put themselves between danger and the public they serve, bringing home the potential for sacrifice exists now just as it did on Sept. 11, 2001.

“I have to tell you a story. I don’t normally do this, but I have the privilege of living across the street. And everyone says, ‘Don’t the firetrucks and the sirens bother you?’ No, they don’t bother me. They comfort me. When I see our men and women rolling out, I make the sign of the cross and I pray for them. Because I know that I can sleep safely because of what they do for us every day. It is a hard job and we are safer and better because of them. God bless our emergency services. Thank you for all you do for us.” Police Chief John Lynch shared his own thoughts on how he and his family were impacted by the events of that day, and how he moves forward in his views on what the country represents.

“For me personally, 9/11 changed my life in many ways. First I recognize a stronger appreciation for our service-men and women. Three of my children enlisted in the service wanting to do something to help their fellow citizens. As I matured, I decided to focus on the positives in life and not dwell in the past. I look forward to our future and work hard each day to resolve conflict and promote peace. As I stand here today to remember and honor those who have fallen, I recognize how those events in 2001 could have undermined what we as Americans stand for. However, we choose to stand together and work toward peace and unity as a nation and as neighbors.

“In 2001 President Bush said, ‘This is a day when Americans from every walk of life unite in our resolve for justice and peace. America has stood down enemies before, and we will do so this time. None of us will ever forget this day, yet we go forward to defend freedom and all that is good and just in our world.’

“On the 10th anniversary of September 11th, the Rev. Billy Graham said “Yes, our nation has been attacked, buildings destroyed, lives lost. But now we have a choice: whether to implode and disintegrate emotionally and spiritually as a people and a nation; or to choose to become stronger through all of this struggle, to rebuild on a solid foundation.’

“I agree that we must honor those who have fallen and always remember how September 11th affected us. It has been a long healing process for all of us. I choose to move forward in peace while setting an example for the world and hope all of you do the same.” Capt. Blanchfield thanked many town employees for assisting with making the ceremony possible. He singled out the fire department’s administrative assistant Cathy Horn, for her work both today as well as in the days after Sept. 11, 2001–again, illustrating the personal side of the events of the day.

“We would like to specifically recognize somebody who never wants to be recognized at all, Cathy Horn. Something you may not know, is the work she put in the weeks following 9/11. During those weeks, Kathy received an overwhelming amount of donations that we received here from the Wilton community. She organized them all, she got them all set up to fill two garage bays. Kathy did this every day for the people of Wilton’s assistance to go to NY and the FDNY.