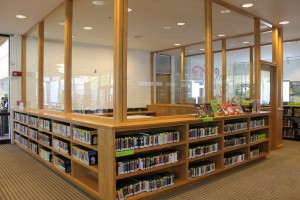 Marking a leap that library and media science is taking in the 21st century, the Wilton Library will be unveiling it’s newest area, the “Innovation Station,” in a ribbon cutting ceremony on Sunday, June 8, at the library’s annual meeting.

The newly-built glass walled space in the circulation area near the teen room is a designed to be a creative area for patrons who wish to learn new skills, exchange ideas, collaborate and create items such as robotic devices, prototypes and even quilts. It will be stocked with the latest in digital and computerized technologies and machines — including a 3-D printer — as new resources for the community.

“It’s a new venture for us. In the past we’ve certainly had rich programing and wonderful resources; we’ve offered classes. Now it’s really bringing the community into a new kind of educational experience,” says Elaine Tai-Lauria, executive director of the library. “The Innovation Station allows for hands-on learning and sharing that knowledge with each other, and taking us a step into technology and advances.”

One part futuristic technology, one part machine shop, this new addition really is part of a philosophical shift that the library is taking in getting the public to look at it in a different way. What was once a very quiet place to check out books and maybe a periodical, now the library is a place that encourages experimentation and collaboration through access to expanded new technologies and innovative resources and tools. The venture is meant to promote hands-on active learning, peer-to-peer training, creative thinking, sharing of resources and knowledge, skill development and exploration of new technologies; it also encourages STEAM (Science, Technology, Engineering, Arts and Math) learning.

Truthfully, it’s a continued expansion of the role that libraries–in particular Wilton Library–plays within the community, as we’ve seen it be a shelter from storms, a place to plug in electronics when power outages are widespread, a place that hosts cultural and educational lectures and programs, as well as sponsors community forums and festivals.

Susan Lauricella, head of teen services, says, “It is a maker space, which is really a movement that’s spreading across the country in libraries and communities. They are meant to serve the communities–sometimes it’s to teach machine skills, sometimes it’s to teach people new computer skills.” She added that there is a maker space already open in Norwalk and another soon to open in Danbury.

The Innovation Station allows the public to access advanced technologies that might be economically out-of-reach for individuals, and allows them to learn new skills.

“It’s a focus on technological literacy. It’s an extension of teaching classes and that kind of education that we have done in the past, and we see these as skills that people are going to need to have in the future. The library can provide a collaborative learning environment and also provide a pool of resources to learn these skills,” explains Thomas Kozak, the library’s webmaster and network services assistant.

Among the new gadgets that are part of the Innovation Station, there will be two new computer workstations, a Mac and a PC, that will have the Adobe Creative Suite–Photoshop, Illustrator–all those graphic and web design tools; those will be connected to a scanner to digitize images, photos and negatives; there will be a 3-D printer, that interfaces with a whole host of software applications to design and build objects; there’s a computerized embroidery and sewing machine, which can take a digitized pattern and create it on fabric.

There will also be machines to digitize and transfer VHS tapes and slides, which Kozak says is an incredible asset. “That is another excellent purpose for a lab space like this, letting the community preserve their personal resources–their old movies, their slides, their things from a previous generation. Those things can easily get lost and if we can give people the tools to archive and preserve some of that history, that’s what we can now do.”

Additionally, there will be software and hardware to allow people to code and write software to program an “Arduino”–a programmable circuit board–or a “Raspberry Pi,”–a self-contained mini computer–which are small devices that can connect to lights, sensors and other hardware–people can learn how to build programmable mood lights that shift in color, or home thermostat systems, for example.

“To be able to show people how this really happens, on a small scale, is really exciting,” Tai-Lauria says.

As much as one would think that this is targeting just the tween and teen users of the library, Lauricella says it’s really for everyone–“It’s for people 13 to 113–but if someone 114 years old walks in, we’ll certainly take him!” Along those lines, the space allows the library to push the stereotypical boundaries of who this technology is for–in addition to knowing the space will be used by the tech-loving teens on the Library’s robotics team, they suggest imagining a sewing or knitting group being able to expand what they do using the new technology.

“We think it brings all demographics of the community together–they can share ideas, teach each other tricks. A lot of it is technology, but it’s not all technology,” Lauricella says.

The new technology will require certain levels of certification and education to use.

“For the month of June, we’re going to have ‘show-and-tell’ sessions, mini-tours where people can see what’s available and explain how it will work. In July, we’ll have open sessions for adults and teens where they can come in to learn how to use the 3-D printer and the other equipment. Over the summer we’ll have a variety of classes, workshops and demonstrations. We’ll have punch cards once people are certified and there will be agreement forms,” that reflects the kind of financial investment that’s been made in the space, Lauricella explains.

As for programming, the Library team will also look to the public to help guide what will be offered, either through requests of what they want to learn or from offers from skilled individuals who are willing to share their knowledge.

As for how they chose the words to name the Innovation Station, Tai-Lauria says it was done with a purpose. “Generically, these spaces are called ‘maker spaces,’ because that’s where you make things. For us, it’s the very concept of innovation–it’s new ideas, seeing how you can change things and innovate.”

So that innovation happens both at the micro level within the glass walls of the Innovation Station, as well as constantly overall at the Library, according to its executive director Tai-Lauria:

“We want to continue to introduce things that will keep us and the community on the forefront. Early on we introduced audio books and then went into streaming music; now we have online journals. Thanks to the ongoing community support we can keep introducing new things, because people need to be aware of and exposed to them, and a library is a place where we disseminate information and education, as it just changes.”