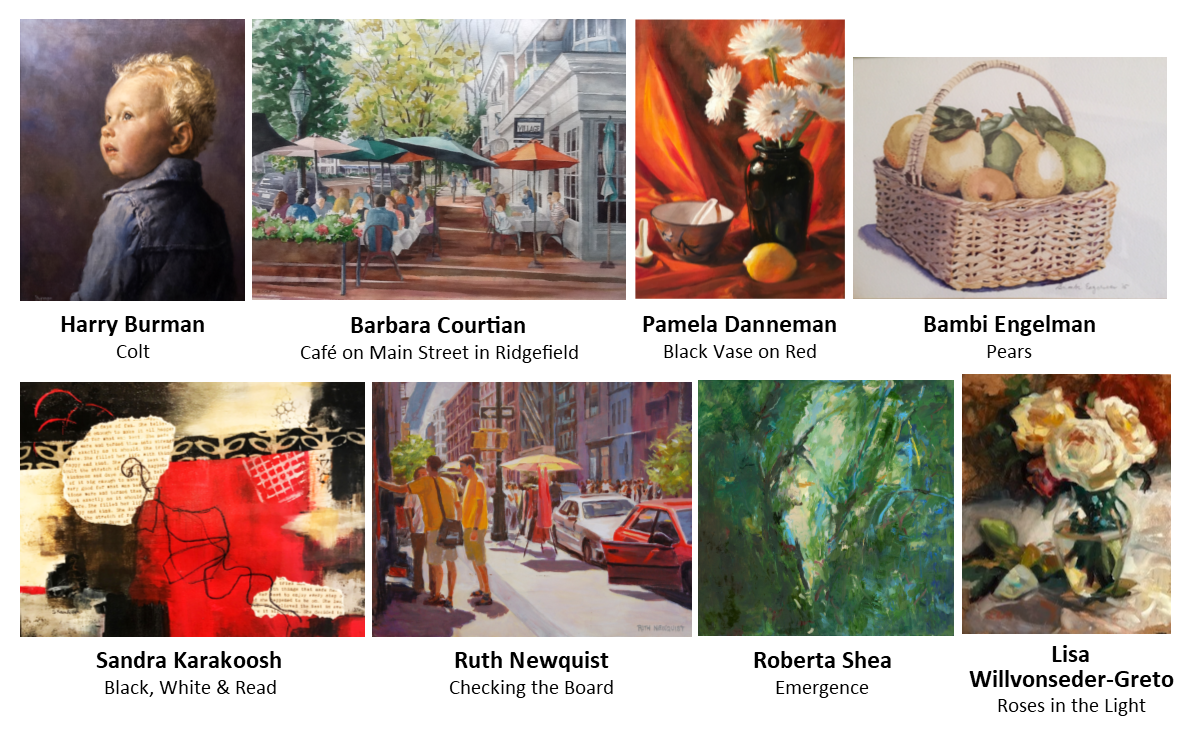 Art chair Ed MacEwen says about the exhibition, “Artists from this group have exhibited here before and they were very well received, so we decided to feature more artists from the same collective to see their depth and breadth.”

Each artist comes to their passion from different routes:

Harry Burman earned his BFA from Herbert Lehman College and was a scholarship student at the Art Students League in New York. He studied drawing with the great draftsman and illustrator Gustav Rehberger. After illustrating for more than 20 years, he was able to pursue his love of painting portraits. He became a member of the National Society of Painters in Casein and Acrylic, nabbing the Robert Sanstrom Prize, the society’s top award. He also is a member of the Portrait Society of America, the Connecticut Society of Portrait Artists and the aforementioned SCAN. His works have garnered numerous awards. He lives in Brewster, NY.

Barbara Courtian graduated from Ohio State University with a BFA degree, and continued her studies in New York at The Art Students League and Hunter College. She worked as anArt Director until she turned to painting full time. Her paintings have been in many showsin New York and Connecticut where she received awards for best Watercolorin Show numerous times. Her works are in many private collections. She splits her time between NY and CT.

Pamela J. Danneman, Ph.D., trained in art at Miami University (Ohio) before switching to science and a career in health care research and development with Procter & Gamble and Richardson-Vicks. Once retired, she returned to art, studying watercolor with Ruth Newquist, Frank Federico, and Laura Wilk. More recently, she has painted in oils, studying with Rick Daskam and Harry Burman. Both Newquist and Burman also are SCAN artists featured in this show. Creating paintings continues to be both an emotional and intellectual passion for Danneman, a fulfilling “second life” for a trained scientist.

Bambi Engelman of Southbury has always loved art and enjoys her weekly art class as a way to “relax” from 33 years of teaching. Upon retiring, she decided to take lessons in any area that interested her. Most of the time her classes have been in watercolor but she also has enjoyed oil, pastel, alcohol inks, drawing, and botanicals.

Sandra Karakoosh is a Cheshire artist, working in oils, pastels, acrylics and collage. Beginning with a concentration on realistic, representational subjects, such as birds and landscapes, her colorful oils and pastels render their subjects with an energetic interpretation. Her never-ending quest for tantalizing subjects ignited her interest in abstraction and collage. She works in different medium and has been recognized with Best in Show and First Place awards in many Connecticut art league exhibitions.

Ruth Newquist of Newtown, CT is known for her oils and watercolors of New York cityscapes as well as New England landscapes. Ruth exhibits her paintings throughout New England and New York. She has won numerous awards from prestigious organizations including the Salmagundi Club, Catharine Lorillard Wolfe Art Club and North East Watercolor Society. She was featured on the Watercolor pages of American Artist Magazine June 1999. She also is represented in Best of Watercolor III, a hard cover book published by Rockport Publishers in 1999 and Splash 9, a hardcover book published in 2006.

Roberta Shea, also of Newtown, has been immersed in the arts all her life. She received her B.S. in Art Education from Southern Connecticut State University and has taken graduate printmaking courses with Anna Audette, attended the Yale University Printmaking Workshop and has participated in other art studies. She was an art teacher at Masuk High School in her early career, and for the past twelve years, has been the docent at New Britain Museum of American Art giving Masterpiece tours for students and adults from the museum’s American collection of Colonial, Hudson River School, Impressionism, Post-Modern, and Contemporary Galleries. Through the years she has participated in various art exhibitions and won numerous awards including the second place prize in painting at the 2018 Ridgefield Guild of Artists Juried Member Show.

Lisa Willvonseder-Greto is a long-time Newtown resident. While attending Syracuse University as an art history major, she was given the opportunity to take studio art classes and her focus was forever changed. She graduated magna cum laude with a BFA from S.U.N.Y Purchase. She works in several mediums but is best known for her oils. She is an award-winning artist who has shown her work in NY and CT. She has served on the Board of the Society of Creative Arts of Newtown since 2004. Lisa also teaches drawing and painting techniques to artists of all levels both privately and through SCAN.

According to the SCAN website, “SCAN [a 501(c)(3) nonprofit] was founded in 1971 by Larry Newquist and seven others to fulfill a cultural need in Newtown and surrounding communities. SCAN has met continuously since then and now has members from all over Western Connecticut and the Hudson Valley of New York.”

The exhibition runs through June 28. Most of the close to 50 paintings will be available for purchase with a portion of the proceeds benefiting Wilton Library.