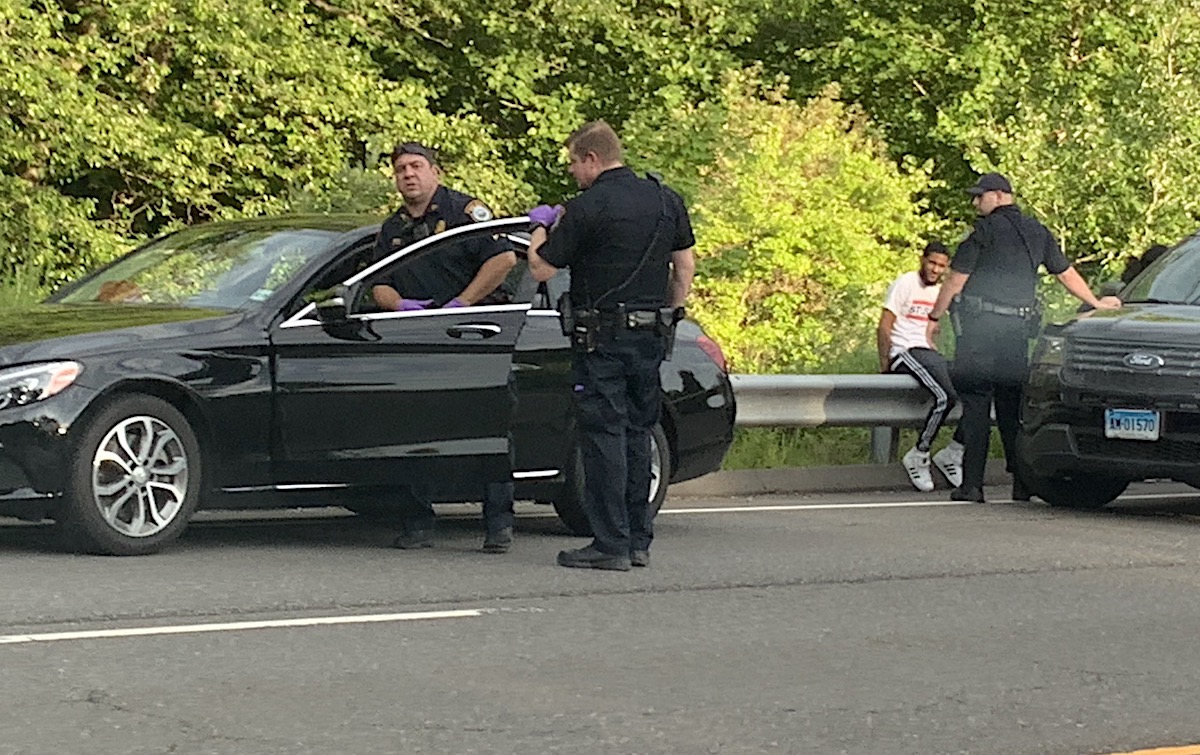 Tuesday, July 2, between 4-5 p.m., it was evident to drivers traveling Danbury Rd./Route 7 near Wilton Center that something significant had happened. Six police cruisers had pulled a car to the side of the road, and two men sat on the roadside railings, hands cuffed behind their backs.

Those two men–Ammar Imad Kiswani, 21, and Mohsin S. Patel, 22, both of the Bronx–were eventually arrested and charged with larceny, illegal use of a credit card, identity theft and breach of peace.

According to the police report, officers were dispatched to Stop and Shop (5 River Rd.) for a report of a disturbance between customers and an employee. A vehicle description was given over 911 and an officer en route to Stop and Shop located that motor vehicle leaving the area, traveling South on Ridgefield Rd., about to make the left hand turn to travel North on Danbury Rd..

That officer made an investigative stop on the 2015 Mercedes C4 and made contact with the occupants. Police say through the course of the investigation they made the determination that two of the occupants inside the Mercedes, Patel and Kiswani, were involved in the disturbance at Stop & Shop.

According to the report, Kiswani allegedly was making multiple purchases when store employees approached him after seeing “suspicious activity.” The report continues to say that Kiswani “began to yell and cuss at the employee prior to finishing the five purchases. Mohsin [Patel] saw the employee talking with Ammar [Kiswani] and began to yell obscenities as well.”

Police say that during the investigation, they learned the credit card used for the five purchases did not belong to either of the two men, and the men allegedly did not have permission to use it. Police also say that Kiswani “admitted to using the card to make the purchase even though he did not know who the card belonged to.”

Wilton Police arrested Kiswani and Patel and transported them to police headquarters for fingerprints, photos, and processing. They were released on $2,500 cash bond each and given a court date of July 12, 2019 at Norwalk Superior Court.