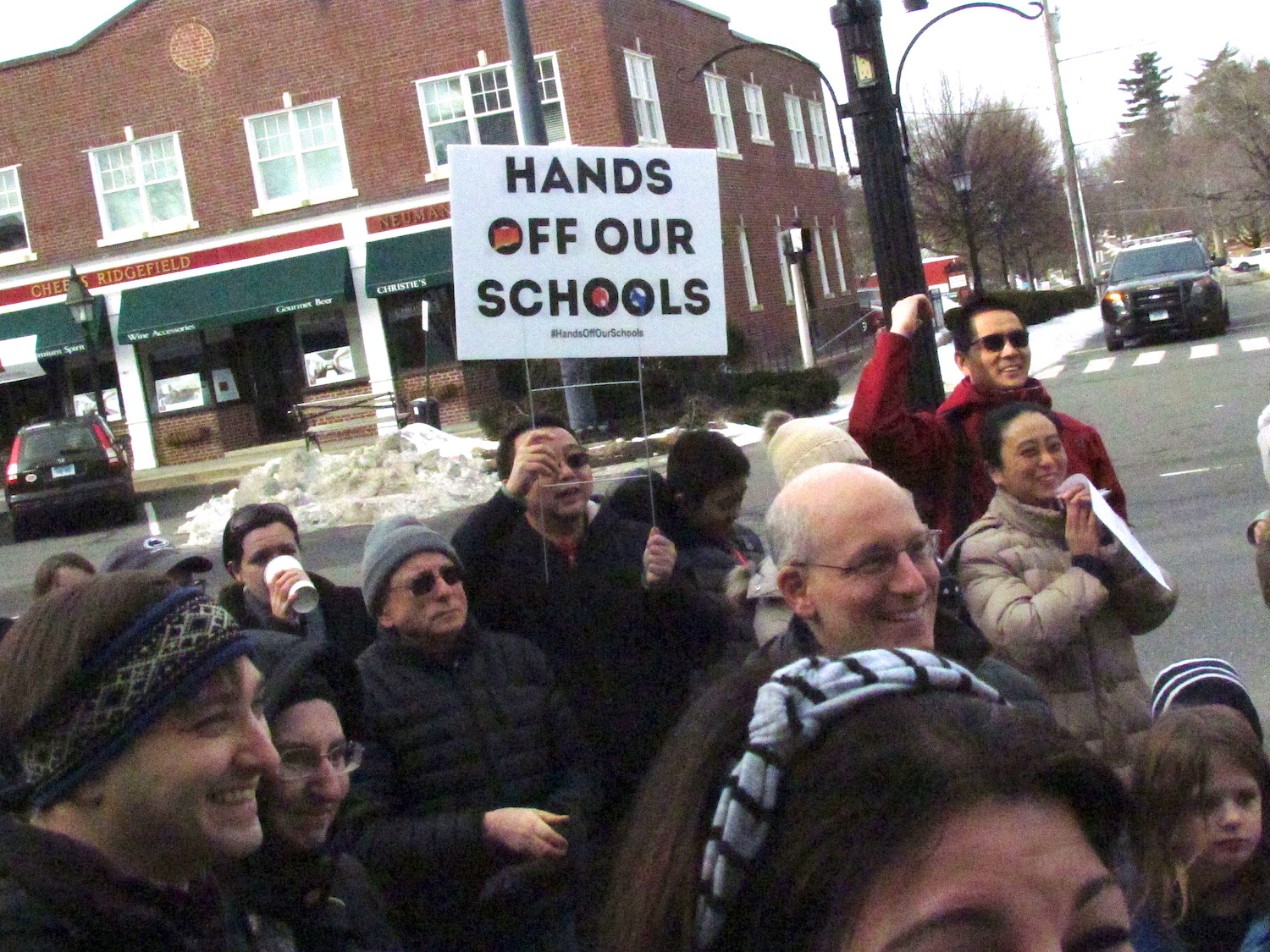 More than 200 people attended a Hands Off Our Schools rally in Ridgefield on Saturday to show opposition to legislative efforts to regionalize school districts in Connecticut. Wilton was well represented both in the crowd and with speakers, as two of our legislators–State Rep. Gail Lavielle and State Sen. Will Haskell–both spoke.

One speaker had a message that no legislator could tell, however–what impact regionalization would have on educational outcomes and teaching in the classroom. Waterbury special education teacher Drew McWeeney, a Wolcott resident, traveled to Ridgefield to explain just why he felt any moves to consolidate districts would harm the work he and his colleagues do.

“What happens to my 10 students when we consolidate schools? I’d get more kids. Right now it’s just hard for me to be able to service 10 students who have IEPs that are 34 pages long with all different goals and objectives that they need to meet. The problem with the people who are proposing this legislation, they’re not working 9-3 in my shoes in a classroom, so they don’t have 10 students with all different needs that they’re teaching. If I get more than I’m required to have, I have to work beyond the hours I already have.”

There are three pieces of legislation being proposed:  SB 738, introduced by Sen. Martin Looney; SB 457, introduced by Sen. Bob Duff; and SB 874, introduced by Gov. Ned Lamont. The third bill is the one that is drawing the most recent attention, because at over 40 pages it’s much more fleshed out than the other two concept bills, and has the weight of the governor’s imprimatur.

It’s also one that may cause difficulty for Wilton’s Haskell, as it may be where he and some of his more conservative constituents split. He’s being pushed by some to say he opposes all three pieces of legislation, but as the governor’s bill doesn’t explicitly say whether it will compel districts to regionalize, it may not be something he’s willing to rule out.

We interviewed him at the rally and specifically asked him to clarify his position on SB 874. While he says he will oppose any move to force regionalization, he says he’s still reading the governor’s bill.

“If it leaves the door open for forced regionalization, I won’t be supporting it. But if the governor wants to prioritize capital projects in districts that operate efficiently, like ours where there’s an appropriate number of students to back-office officials… I don’t think the taxpayers of Fairfield County should be on the hook for subsidizing …inefficiency. That is the only proposal that I would support–I would not support the governor’s proposal if it includes forcing any town like ours to regionalize.”

Haskell reiterated that message when he spoke to the crowd:  “Forcing regionalization is not the right way to go.”

Lavielle is opposed to all three bills, including the governor’s bill, which sets out to create a study commission.

“I would urge you to be very careful about anything that looks like is ‘just a study’ because even if it turns up nothing in the end it will leave this cloud of uncertainty over all of us,” she says.

She also echoed what McWeeney the teacher said. “There’s not a word about improving the quality of education in any of these three bills, not a word.”

The message throughout continued to be that residents need to communicate to their legislators where they stand. Written testimony can be sent in PDF or word document form via email, and people can testify at the Education Committee’s public hearing on March 1 in Hartford.