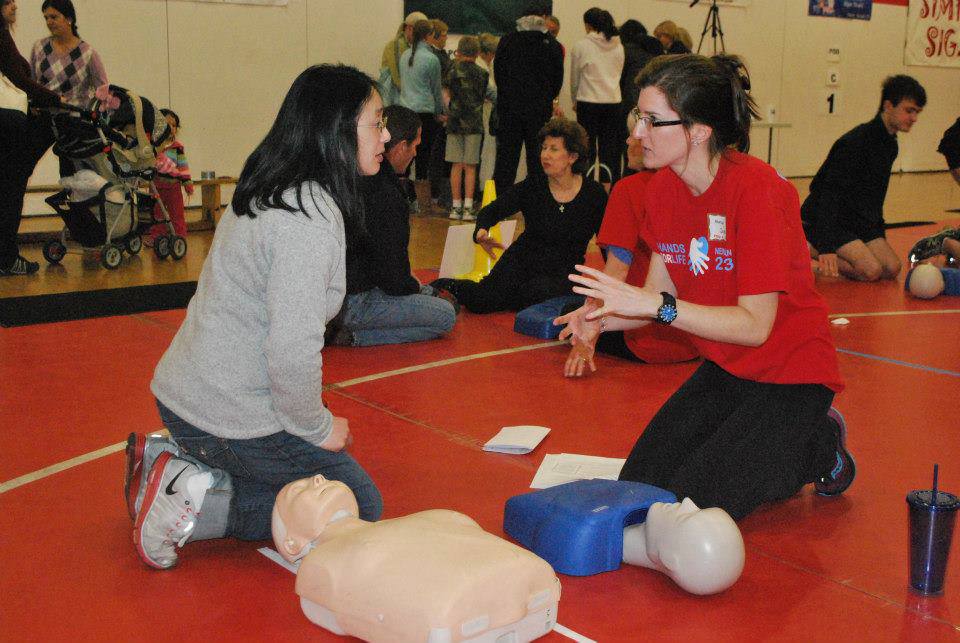 On May 11, 2011, Wilton resident and mother of two Nancy Capelle woke up and went about her regular morning routine.  She had coffee, some breakfast, and then headed down to Calf Pasture Beach for “Sally’s Run,” a race to benefit Norwalk Hospital‘s Whittingham Cancer Center. When she returned home later that day, she walked into the kitchen to grab a bite to eat. That’s when her life changed.

Capelle felt some discomfort, and thought she was having an esophageal spasm; she was actually in cardiac arrest and was suffering a heart attack. Thanks to quick thinking on her part to call 911 and the fast arrival of some very skilled Wilton EMTs, she survived.

But she was fit and healthy, and at only 40 years old, seemingly too young for something like that to have happened.  So when it did, Capelle felt scared, alone, and in search of information. She turned, of course, to the Internet.

“As soon as I got home from the hospital, I started researching Spontaneous Coronary Artery Dissection (SCAD), the ‘fluke,’ as my cardiologist called it that had caused my heart attack. I found very little [information]. Not only was SCAD something I had never heard of bef­­­­­ore, it appeared that the medical community was almost as equally in the dark,” Capelle said.

She found few scientific papers (and those she did find were outdated) along with grim statistics and ambiguous outcomes for SCAD patients. “There weren’t any SCAD-survivor support groups to join or active research studies I was aware of, and the months that followed were lonely and nerve-wracking. I was a young, physically fit, energetic mom who was now spending mornings in cardiac rehab with patients twice my age,” Capelle said.

This month marks the 10th year of the American Heart Association‘s Go Red for Women Campaign, which was created to send the message that heart disease does not only affect men. In fact, it is the leading cause of death for both women and men. According to the Centers for Disease Control, more women die of heart disease than from all types of cancer–combined.

These awareness-raising efforts are a step in the right direction. But, Capelle believes the medical community has not yet spent enough resources on what causes SCAD, whether because it was considered so rare that support for such a study would be difficult to find, or that finding enough SCAD survivors would be even more problematic. So, Capelle began her mission to save lives.

In an effort to save more people from death as a result of cardiac arrest, Capelle championed the cause to get Wilton designated as a HeartSafe Community by the State of Connecticut (you can see the signs at each town border). Being a HeartSafe Community entails that a minimum number of citizens per total population are trained in CPR or CPR/AED (automated external defribrillator), and that there are permanent placements of AEDs in areas where many people are likely to congregate, such as supermarkets, theaters,  schools, libraries, senior centers and others. In addition, Wilton must have a designated first response team with AED-equipped vehicles and currently certified CPR/AED trained personnel.

To Capelle, HeartSafe designation was just the beginning, and she is pushing for additional AEDs in Wilton, as well as an app for the iPhone that will alert citizens to a cardiac arrest in a public place so that those trained in CPR can respond. Statistics show that the sooner chest compressions and defibrillation can be performed on a patient suffering cardiac arrest, the better that patient’s chance for survival.

“As a kid, I was always the one rubber-necking on the highways when we passed a car accident, or saw emergency vehicles.  I wanted to be the one out there, helping to save lives,” Capelle recalled. Shelving those dreams, she pursued a career in corporate America. After her heart attack, she discovered the courage and freedom to pursue that childhood aspiration:  as a member of the Wilton Volunteer Ambulance Corps (WVAC), she is now a first responder and a Crew Chief. In addition, Capelle is now a motivational speaker who shares her experiences with others in the hope that they will live the lives they were meant to, and to spend each day to the fullest.

“Confronting death and starting all over again, I was determined to live the life that I wanted–not according to the script that I had grown up with. I had been expected to follow a certain path with the ultimate goal being financial success or marrying a man who had a promising career on Wall Street, for example. I had been steered away from public service careers and toward activities that would ‘lead to something’ lucrative and prestigious. My experience has given me the chance to examine my life, my family, my work and my priorities, and to be a more involved mother to my daughters, a more loving wife to my husband, a more devoted daughter and a more dependable friend,” Capelle said.

From the bottom of our hearts, Nancy Capelle, we thank you for making Wilton a safer place to live.

The five major symptoms of a heart attack are:

In addition, the American Heart Association specifically points out that heart attack symptoms in women can differ from the more “classic” symptoms experienced by men.  For example, women may experience only one or some of the following: