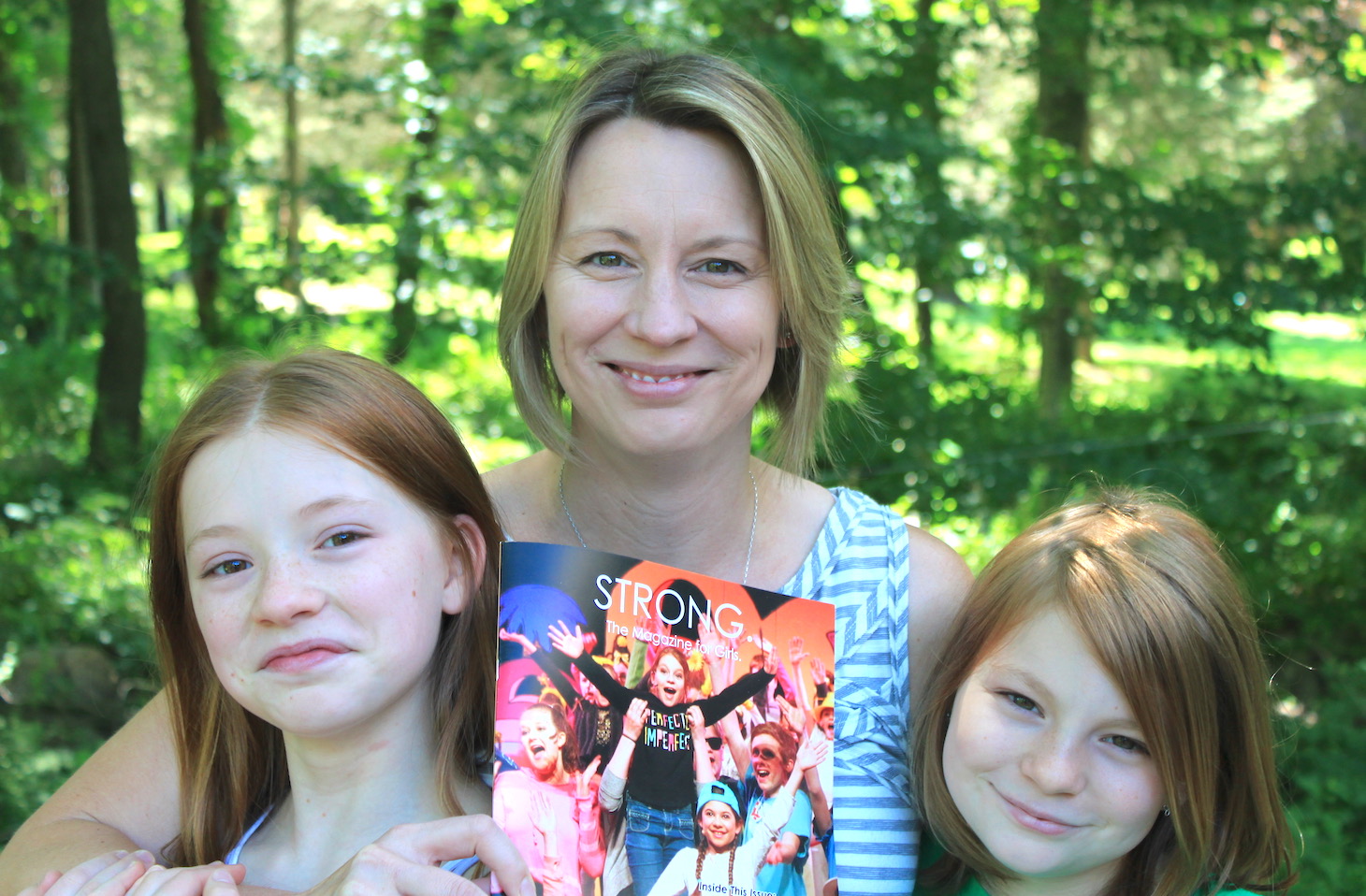 You can do and be anything you want to be–that’s the message of STRONG. The Magazine for Girls, an inspiring new quarterly publication being launched by Wilton resident Sarah Beach. Aimed at middle school-aged girls, the magazine aims to empower girls to be the best version of themselves they can be by presenting strong female role models, and encouraging girls’ interests and passions, wherever they may lie.

In creating this magazine, Beach is setting the perfect example of how to follow a passion and accomplish anything, no matter how hard. She has put together the first issue and today kicks off a Kickstarter campaign to raise the $15,000 it will take to print and distribute copies of it.

The inspiration for STRONG came from the heart, as Beach watched her three children–two of them girls, 12-year-old Lucy and 10-year-old Daisy–and observed how they were experiencing the world.

“One of the school picture companies sent home something last year, showing you could take a photo and make it into a magazine cover. I was appalled that all the girl ones were pink writing and ‘BFF!’ They were just so stereotypical. And all the things that are happening in the world now. Having to fight to be equal, and how I see it impacting my family. It makes young men question whether or not women are really equal and it makes the girls question whether or not they are equal.”

The more she saw, the more Beach was motivated to do something. As she writes on her website:

“They had absorbed the message that society had been sending them their whole lives that women tend to behave in a certain way, do certain jobs and like certain things. Who can blame them? They are surrounded by books with male protagonists, and magazines about fashion, celebrities and body image. If you browse the magazine aisle in your local grocery store or bookshop, there’s really not much for girls in this age bracket.  The majority of magazines for girls aged 10-17 focus on fashion, celebrities and body image. Cover headlines actually say things like, ‘Finding the right swimsuit to flatter your figure’ and, ‘What his text really means.’”

Beach found that, despite raising them in a feminist home, her daughters thought there were some things they couldn’t really do because they are female.

“In the news they see how hard women are still having to fight for equality, and they are surrounded by male role models. There are more male astronauts, more male politicians, more men running companies. In school their teachers are still predominately female, and the doctors and surgeons they visit are still predominately male. Lucy is great in math and science, she could do or be anything she wants to be, but about a year ago, she went, ‘Well, no, women don’t really end up being an architect or engineer.’ Which was horrifying,” she says, adding that she even sees her son doubting equality for the first time.

Beach says it’s always been her dream to write. After university in her home country of England, she worked for the National Farmer’s Union as a parliamentary advisor which Beach says is sort of similar to a lobbyist. “There was writing policy briefings, and I liked to put together arguments and essays. I had to write to MPs and Peers and explain how legislation would impact on them. I always enjoyed the writing element of the job.”

She put work life on hold after she became a mom and the family moved to Wilton eight years ago from the UK. She taught for three years at Zion’s Hill Preschool but realized it wasn’t what she wanted to do long term.

“I started to write a novel, actually, but realized I just couldn’t focus for that length of time on one single thing. The idea of the magazine, when it all came together, it was a marriage of all my passions–advocating for my girls, the writing that I wanted to be able to do, and you’re connecting with people and doing the business side. Doing a magazine isn’t just about writing–it’s researching how you get it published, and how you do a media package, and marketing. There’s so much involved that appeals to me. And really it’s something that might be able to help my girls and set a good example for them,” Beach explains. In March, she devoted herself full time toward STRONG‘s launch.

“I started right from the basics, even googling which publishing software was the best to use. And then getting started on the articles–I already had a couple ideas, and I started writing, reaching out to contacts around the globe. Each new article I came up with, I was more excited. ‘This is really great,’ and then, “This one is really great!” she laughs, saying, “It’s been fun and I’ve really enjoyed it.”

It’s a passion project that she’s enjoyed seeing come together, but Beach has been doing it pretty much single handedly.

“It would be nice to have someone to bat ideas back and forth with. I do show it to people, and I’ve had a lot of support from people offering to help proofread. But it would be nice to do it with somebody, and finding someone who feels the same way I do, at the same time, and has the time to do it–let alone not need the financial payback right now. But so far, so good. Sometimes it does seem daunting and I know it’s not perfect, but I feel that if I get enough people behind it, it’s a community effort.” Speaking of community, Beach loves having her own built in test market, with her own children to give her feedback and bounce ideas off of. “I think they love it. They’re glad I’m doing it and proud I’m doing it. They’re quite excited to read it.”

So what is STRONG?

We asked Beach to explain how she defines STRONG.

“It’s self-belief and courage to be yourself and not to be afraid to be you. That’s what I want the girls to feel, that it’s okay to be them. I don’t want them to think that they shouldn’t be this way, or they have to like pink, or they have to be really into celebrities, and shouldn’t be studying architecture or whatever. I want them to find out who they are and be proud and strong enough to be themselves.”

The magazine will be targeted to middle school-aged girls, from around age 11-and-up. There will be some lighter subjects as well as meatier topics; for example there is an article in the first issue about the conflict in Syria. Beach says it will hopefully even appeal to girls even older than middle school, and be something that moms and daughters can read together.

As for content, Beach says there are so many areas she wants to cover.

“There will be features and news articles showcasing girls and women who have a wide range of hobbies and interests. In this first issue we profile Wilton teen Emily Fields, who just won her fourth gold medal in Taekwondo. I was just talking with someone I want to do an article on, a woman who works in the Norwalk Aquarium. I just reached out to a young Wilton woman who is a ballerina in Paris. I want to show that there are kids and women doing all these things, ranging from cheerleaders and ballerinas right through to rocket scientists–I want to show them everything.”

“That’s why in this first issue I did an article on Yusra Mardini, a member of the Refugee Olympic Athletes Team at the Rio Olympics. She is a Syrian refugee who rescued 20 people on a boat on the way to a Greek island, swimming to rescue them. Now she’s helping out at the UN, trying to be a voice for refugees,” Beach says.

There will also be a regular feature called, “Growing Up In…,” to profile different girls from all around the world. The first issue features a young girl growing up in Cape Town, South Africa. Some of the girls Beach plans to showcase will be from different cultures and growing up here in the U.S., “…for example maybe the daughter of a girl whose parents immigrated from India.”

“This issue it’s fixing a puncture in a bike tire–which is actually very hard, but why not? We can do it!”

There will also be quizzes, music and book reviews from girls, and other elements to keep it light and balance it out. The magazine will be published quarterly at first, but Beach would love to build up the frequency.

At the moment, the magazine does reflect a sort of Connecticut feel, because it’s where she has produced the first issue. But STRONG isn’t meant to be just a local publication. Beach isn’t yet sure how big the magazine will be, but she says it has mass appeal. “There’s a need for it everywhere.”

She’s especially heartened by the response she’s gotten since introducing the magazine idea on Facebook and to her network of contacts.

“People have said, ‘Can I help in any way?’ All kinds of offers of help–to connect me to people in magazine publishing, people with different expertise offering to write for me, people offering to do makeup for photo shoots. Right now I just want people to spread the word.”

Why Kickstarter is so Important Up to now, the magazine has been a labor of love for Beach. She was very excited to have received the sample printed copy just last Friday, but make the first issue a reality, Beach needs funding, and so she is launching a Kickstarter campaign. She set the goal at $15,000, which is the minimum amount she needs to get the first issue printed and distributed.

“It’s all or nothing. You have 30 days to reach your goal or you don’t get the money,” she says.

The Kickstarter campaign launched today and Beach says any amount helps. She hopes people will consider donating and appealing to their networks of contacts who might also be interested in supporting the effort.