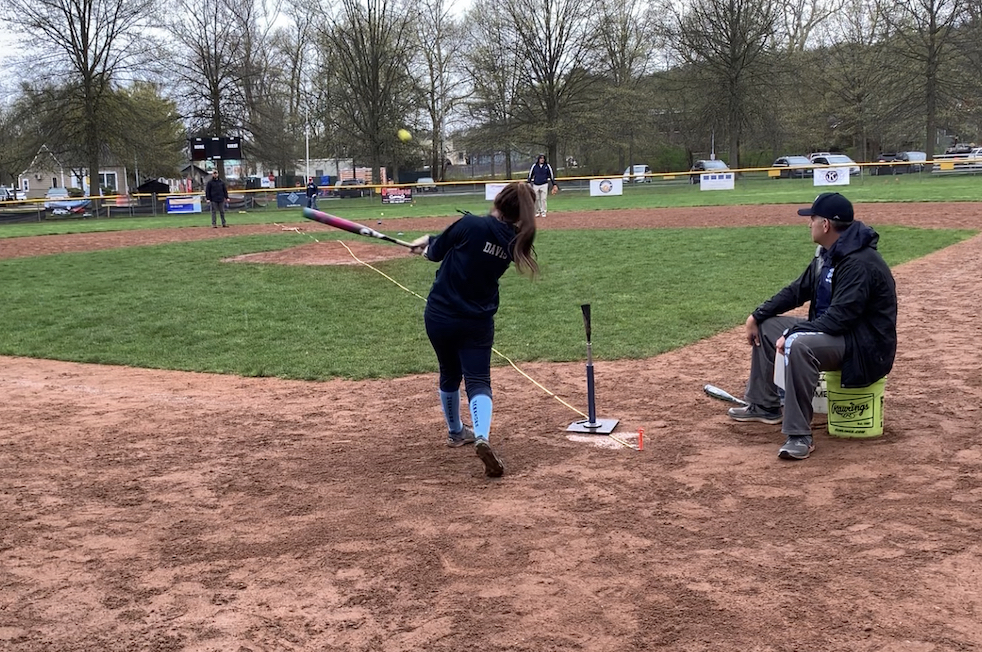 Each week GOOD Morning Wilton will run news of recent results and scores submitted by Wilton Youth sports teams. Please send all stories and updates, along with a photo to editor@goodmorningwilton.com by noon on Monday of each week. Stories received after the deadline may not be included. Results write-ups will be grouped by sport and published in the order they are received.

On April 28, Wilton Little League hosted its very first local competition for Major League Baseball’s Pitch Hit & Run program. Despite less-than-ideal weather conditions, more than 80 boys and girls (ages 7 through 14) competed in the event at the Wilton YMCA. The event consisted of three competitions — throwing accuracy, batting distance/accuracy and running speed — and the players were divided into two divisions (baseball and softball) and multiple age groupings (three for baseball and four for softball). The winners in each category, together with the overall winner in each division/age group, have qualified for the Sectionals event that will be held on May 25 in Stratford.

Best of luck to all of the Wilton competitors at Sectionals on May 25!

The 14U Wilton Warrior softball team is well under way this season, winning against Shelton, 17-16 on Saturday, May 4 with 16 hits on the day. Jenna Soltis pitched a complete game with six strike outs. Ella Christ went 4-4, with a double and triple and 5 RBIs. Gia Sciortino had three hits; Anna Joy and Soltis had two hits; and Amelia Fleming had the walk-off single to win the game.

11U Takes 3rd in 12U Tournament Bracket

Over the weekend of May 3-5, the 11U Wilton Warriors softball team competed in the 11th Annual Sunrise Cottage Benefit Tournament in Ridgefield. The girls proved to be a strong contender finishing third overall in the 12U bracket.

Wilton opened the tournament with a 13-0 romp over the 12U New Canaan Rams. Sofia Samai pitched a great, three-inning shutout allowing only two hits and striking out three batters. The offense was led by Ellie Qudeen, who went 2-2 driving in four runs. Kelly O’Malley, Annie McMahon, and Grace Qudeen also had hits for RBIs to secure the win.

The team followed up with a 10-3 win over the 12U Rowayton Hurricanes. The offense came to life with Ellie Qudeen, Kaitlin Feldman, Grace Qudeen, Grace Couch, and Ava Gaudio, all of whom had hits for RBIs. Sophia Viggiano and McMahon played a strong defense game. Couch commanded the mound allowing only three runs on one hit while striking out 10 batters.

The team’s final pool play game ended in a heart-breaking 2-3 loss to a strong 12U Danbury P.A.L team. A fierce pitching duel combined with big defensive plays made for watching a great game. Viggiano, Emma van Heyst, Kelly O’Malley, and Riley Keane all had major plays in the field to keep runs from scoring. Feldman pitched a great game, allowing only three runs on five hits and striking out five batters.

The bats were alive on Saturday, May 4 as Cannondale Generator (Coach Maggio) won a close one over Hometown Gas (Coach Raniolo). Cannondale led 1-0 early despite a strong start from Hometown’s Ryan Doughman, who struck out the side in the first inning. Cannondale led by as many as three runs but Tristan Albright and Greg Bocchino kept Hometown Gas in the game with great pitching of their own while also coming up big at the plate. Andrew Eckert’s alertness and speed on the bases led to a key run in the third inning to bring Hometown within one. Brendan Raniolo ripped two singles in the game including a key hit in the top of the fifth that was followed by a clutch, bases-loaded RBI single by Chase Friedman to tie the game at five apiece. Cannondale put a runner on in the bottom of the fifth and he would go on to score the game-winning run with two outs, capping off a great game played by both teams. The final score was 6-5.

Tigers Escape Gators With a Walk Off Win, 5-4

The Wilton Little League Minors LSU Tigers Team, sponsored by Ed’s Garage Doors, won 5-4 in its last at-bat against the Florida Gators, sponsored by Loren Findorak Drilling, Inc. The team came back from a 3-4 deficit in the fifth inning to get the win on the back of clutch hits by Adam Nevas, Nathan Yovine and Mario Coppola and great base running by Evan Ash.

On the mound Casey Meyer, Cole Herbst, Henry Darst and Coppola combined for 14 strikeouts on the day. Jack Squitieri led the way with two hits while Meyer, Adam Nevas, Max Nevas, Darst, Coppola, and Yovine each had a hit. Aiden Cocca, Ian Chase and Luke Sonatore rounded out the effort with solid at bats and aggressive base running.

Pramer Fuel jumped out to a big lead early in the game thanks to a dominating pitching performance by Cooper Rekow and great hitting by the entire Pramer Fuel team. The lead would have been even bigger if not for a sensational catch in center field by Joshua Comiskey, strong middle relief by Charlie Heffernan, and heads up defensive play by Luke Adams. People’s United Advisors staged a late game rally with walks by Colton Korpan, CJ Gilchrist, and Liam O’Sullivan, and hard hits by Ryland Sanders, Jimmy Dineen, Gregory Fila, Colton Smith, Jaxx Magner, Cooper Young, and Daniel Hickey, but the rally was snuffed out thanks to great defensive plays by Will Viggiano and Keegan Kazan.

People’s United had one of their best offensive performances of the season with Liam O’Sullivan, Gregory Fila, Daniel Hickey, Ryland Sanders, and Jaxx Magner all reaching base safely and with big hits from Joshua Comiskey, CJ Gilchrist, Colton Korpan, and Charlie Heffernan. Cooper Young was a beast behind the plate for People’s United and Luke Adams made a great defensive play. But in the end, Gregory and Adams’ offense proved to be too, much highlighted by triples from Jake Siegel and Connor Lane and three runs scored by Brad Mallory.