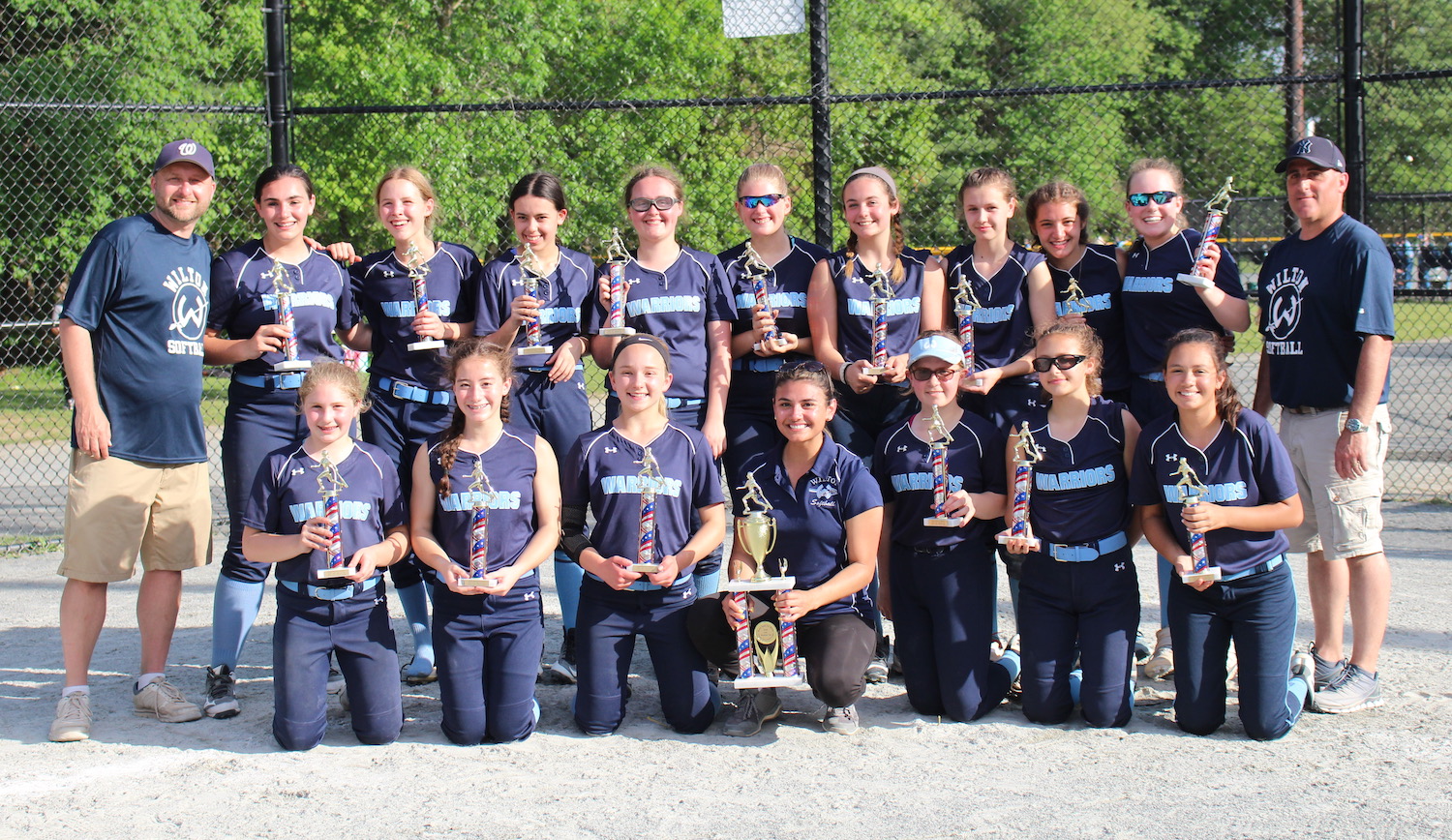 GOOD Morning Wilton will run news of recent results and scores submitted by Wilton Youth sports teams. Please send all stories and updates, along with a photo to editor@goodmorningwilton.com by noon on Monday of each week. Stories received after the deadline may not be included. Results write-ups will be grouped by sport and published in the order they are received.

In the second half Sallese was in goal; Levy, Ronan O’Halloran, O’Neil and Ali all played midfield; Galligan and Allam played striker; O’Neil, O’Halloran and Wisdom had goals; and Martins, Kalter, Miller, Wayland, and Wisdom were on defense. Missing from the game but present in spirit was Robbie Prather.

It was a gorgeous morning for soccer as the Wilton Girls U9 2010 Blue team took on Old Greenwich and walked away with a 3-2 victory. The first half was led by strong offensive play by Audrey Burton, Katerina Cross, and Ria Kurien and solid saves in goal by Harper Pattillo. Old Greenwich managed to score the first goal but Wilton quickly came back with a goal by Juliette DeStefano and quickly followed by another goal by Brynn Grosso. Wilton kept the pressure going with strong ball movements and passing with another attempt to score by Kerry Sullivan. The first half ended after another goal from Old Greenwich ending the half at a 2-2 tie.

The second half was led by strong and aggressive offensive play by DeStefano and Jacquelyn Coppola, with multiple shots on goal. Wilton took the lead with a goal by Coppola. Great defensive play by Olivia Edwards and multiple saves by goalkeeper Leianna Cross prevented Old Greenwich from scoring in the second half and secured the girls a win!

The 2010 Girls also played in Darien on Saturday and walked away with a 1-5 loss.

On Sunday, May 19, the Wilton 2010 Girls U9 White soccer team won an exciting match vs Fairfield. Wilton went down 2-0 but then scored four unanswered goals. Savannah Quick started the scoring and then Sophie Duvall scored three straight goals for a hat trick. Ava Lafiosca and Avery Galligan made some great saves in goal. They were helped by great passing from Taylor Setterlund, Lilly Flatt and Hannah Hall. Excellent defense by Allison Massaua, Nora McGrath, Samantha Von Loesser and preserved the win for Wilton.

Wilton Boys U9 White played a hard fought game against Ridgefield on Sunday, June 2. Great goalkeeping by Connor Filip and Jeff Fox and defensive plays by Adrian Joseph, Holden Reading and Jack Vermuelen kept the game close despite numerous break aways and shots on goal by Ridgefield. Wilton shined in the second half, putting three unanswered points on the board, with goals by Hans Greene and Jack Mulfinger fed by great offensive plays from Samrath Dhamoon, Rocco Tripodi and Neel Popli.

April and May rainouts made it a busy weekend for the Wilton Girls 2009 White team, with games both Saturday, June 1 and Sunday, June 2. With the weather finally holding, the Wilton White girls were able to complete the doubleheader with two solid showings, posting a 3-3 tie against Darien and putting on their best performance of the spring in a comprehensive 3-1 victory over New Canaan.

Wilton opened strong at Darien, with Harper Crawford converting a Taryn Czick cross for an early 1-0 lead. Relentless midfield play by Abby Savage helped Wilton control the action in the early stages of the first half, and Czick tallied two goals of her own to pace Wilton to a 3-1 advantage. Darien would battle back, however, knotting the score just before halftime before the two teams settled into a defensive struggle in the second stanza.

Katie Cosentino came up big in goal in the second half, stoning Darien on a couple of close-range attempts, and Caitlyn Tsai’s strong play on the back end helped Wilton leave town with the draw.

With one game under their belts to shake off the rust, the Wilton girls came out ready to go Sunday at home against New Canaan. Czick converted a long-range shot in the opening minute to give the White squad a lead it would never surrender. On defense, Gaby Torres snuffed out any chances for New Canaan in the early going and Isla Dzik pitched a first-half shutout in goal.

It was an impressive all-around effort for Wilton. Naomi Cronley provided constant pressure on offense, Abby Philippon demonstrated her skills at all levels of the field, and Madison Pendergast put the game out of reach with a pair of strikes–one in each half–to provide the final margin.

Little League–Minors Division for week of May 13:

People’s United Advisors’ bats finally woke up with great hits by Colton Korpan, Cooper Young, Liam O’Sullivan, Charlie Heffernan, Joshua Comiskey, CJ Gilchrist and Jimmy Dineen. People’s United also got some great defensive plays from Jaxx Magner and Gregory Fila. But Loren Findorak Drilling had an awesome offensive performance of their own with every player safety reaching base which proved to be too much for People’s United to handle.

People’s United Advisors bounced back in the second game of their Saturday doubleheader and pulled out a win in their final at bat on a steal of home by Jimmy Dineen. Highlights for Cannondale Generators included big hits by Billy Greeff, Denny Dustin, and Tommy Maggio.

Wilton 10U Travel (5-1) came from behind to score four runs in the bottom of the sixth to beat Weston on Sunday morning, May 19. The comeback was highlighted by Greg Bocchino’s two run double to left and eventual winning run scored on a wild pitch.

Denny Dustin led the offense with two hits, with Braid, Cretella, Fox, Charlie Heffernan and Bocchino each adding a hit of their own. Ethan Driscoll and Keegan Kazan split the catching role in a solid defensive effort.

The Alabama Crimson Tide, a Wilton Little League Minors team sponsored by Gregory and Adams, played an amazing game to end their regular season of play; coming away with a 6-3 win over the fierce Auburn Tigers. Brayden Preisano had a slamming RBI triple at the bottom of the first, brining Jacob Siegel home for the first run of the game. The pitchers, Benny Coleman, Wyatt Hoffstatter, and Connor Lane, all threw great pitches keeping Auburn at bay. Catchers Ian Connell and Zachary Feldman both had phenomenal plays stopping runs at the plate. Infielders and outfielders Andrew Sherman, Murphy Coutant and Porter Coutant made solid plays throughout the game, with Porter Coutant catching a high pop-up fly to help bring home the win. Great win Crimson Tide, and good luck in the playoffs!

People’s United jumped out to an early lead thanks to a great starting pitching performance by Liam O’Sullivan and hits by Luke Adams, Daniel Hickey, Colton Smith, Gregory Fila, Charlie Heffernan, CJ Gilchrist, and Jimmy Dineen, and a walk and run scored by Ryland Sanders. As the game progressed, People’s United maintained that lead thanks to great defense by Jaxx Magner, Joshua Comiskey, Colton Korpan, and Cooper Young. Hometown Gas was able to keep the game close thanks in large part to a fantastic relief pitching performance by Greg Bocchino.

For the third year in a row, gymnasts from the Wilton YMCA spent Mother’s Day weekend in Augusta, ME competing in the 2019 YMCA NorthEast Regional Championships. For most gymnasts, this is the final meet of the season. For the rest, this meet is the last stepping stone before the season finale in June with the National Championships in Wisconsin Dells, WI.

Arguably one of the more challenging meets of the season, Wilton represented with flashes of red on the podium for both team and individual awards, including nine individual All Around awards and a team AA placement.

For age 10B, Grace Jeanes graced the podium for beam and floor, placing 6th on both events.

For age 12, Kaelyn Talisse’s steady beam routine scored a 9.0 for a trip to the podium for 4th.

For age 13, Ella Arghirescu’s refocus on her final event earned her the title of Floor Champion (9.050), while placing 4th on bars and beam, 5th on vault, and finishing 2nd AA. Ella Mancuso was crowned Bars Champion for her gorgeous routine, placed 3rd on beam, 5th on floor, and earned the 3rd AA trophy.

For ages 10-12, Taylor Archambeau (“Miss Cool as a Cucumber”) was crowned Bars Champion, placing 2nd on beam (9.425), 5th on vault, and easily winning the title of Regional Champion.

For age 14, Alyson Scheurkogel’s competitive spirit was in full force, and with only a week of practice behind her after taking a month off, took 2nd on vault (9.125), 3rd on floor (9.050), and the 4th AA trophy. Kaylie Berghaus earned 3rd on beam with a lovely routine that scored 9.2, and placed 7th on bars. 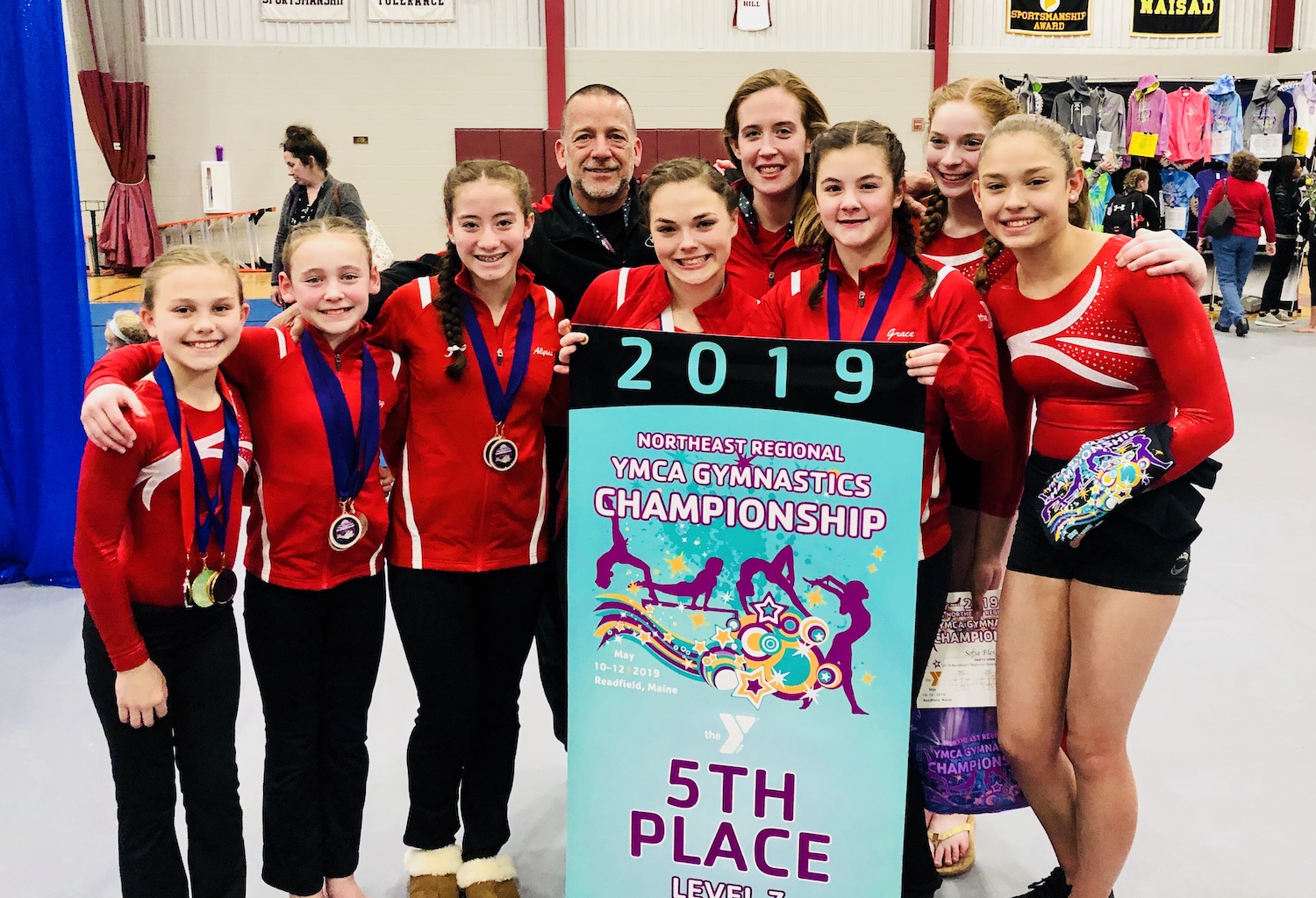 Wilton Warriors took on #3 CT Bullets for the semi-final game. With the Bullets scoring two runs in the first inning, Wilton scored two runs to tie the score in the bottom of the first. Wilton took the game home after seven innings, winning 6-3. Spinelli pitched another complete game with six strikeouts.

In the championship game, Wilton faced the undefeated #1 seed, NP Velocity. Facing a tough pitcher, the Warriors were down 2-5 after three innings. The bats came alive and Wilton rallied back to put some hits on the board. Wilton took the lead 7-6 after the fourth inning. Wilton increased its lead to 10-6 with Jenna Soltis hitting a triple and Spinelli with four hits and three RBIs. However, Velocity tied it up 10-10 in the seventh and took the game to extra innings. Under the International Rule of Tie Breakers, Velocity took the lead and won in the eighth 11-10. The Wilton Warriors took home the second place trophy.