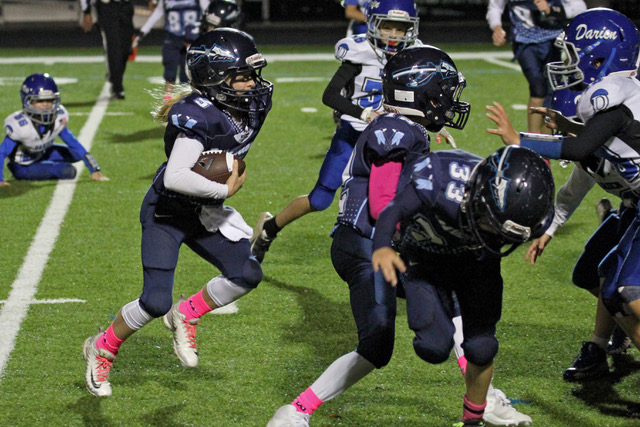 The Wilton White U9 girls soccer team took on Trumbull on a beautiful autumn day in Wilton. Wilton was impressive with multiple shots on goal early in the first half, but Trumbull struck first and took a 1-0 lead. The Warriors were not deterred and after quick thinking combined with multi-player passes, struck back to tie the game at 1-1 in the second half. The second half was hard fought, but a late goal by Trumbull handed Wilton a 1-2 loss.

The Wilton Girls 2009 soccer team played Trumbull at home at Merwin Meadows on Sunday Oct 14. The game began with Trumbull being frustrated by Wilton’s pressure, with Madeline Rayment, Sadie Sherman, and Gabby Ray shutting down Trumbull’s offensive pressure as defense, and Victoria Jankowski, Casey O’Connor, and Zoe Blum pressing Trumbull’s defense to keep the ball on Trumbull’s end for most of the first half. The remainder of the first half was the same, with Ally Phelan and Sophia Solomon on outside defense keeping the ball moving up to Audrey Lepore, Andie Langleand, and Grayson O’Donnell while Sadie Sherman broke up all of Trumbull’s break aways in the middle. Trumbull’s defense played well and minimized Wilton’s opportunities on goal. The best offensive opportunity in the first half involved brilliant passing by Ray and  O’Donell to deliver the ball to O’Connor for an opportunity at goal. Jankowski kept the score 0-0 by half time with a brilliant save.

The second half was kept scoreless by multiple brilliant saves by O’Connor at keeper. The entire team worked to keep the pressure on Trumbull during the second half. Ray protected the right defensive field with unending effort to keep the ball coming back to Wilton’s offense. O’Donnell cleared the ball to provide opportunities for Wilton’s offense to score, all of which were ultimately shut down by Trumbull. Rayment kept the pressure on Trumbull’s right defense the entire second half to shut down attempts to move the ball forward.

Both teams played exceptionally well. It was an exciting match up resulting in a no-score game. The game showcased Wilton’s improvement in personal skill and team play compared to last year.

It was a chilly afternoon but a hot game as the U9 Girls Gold Team traveled to Shelton. The game started with shooting by Caitlin Stocker, quickly heating it up. The first couple of minutes was more or less “balanced,” with both sides finding quite a few opportunities. Kara Zane saved multiple shots, including free kicks and corners. Brianna Shiue, Tessa Ferranti, Maggie Buchichio, and Caroline Condon kept Shelton’s goalie busy. Emily Ma, Claire Macken, Siena Buchichio, and Maeve Ryder made sure that the ball did not pass midfield easily. The balance was quickly broken by Tessa Ferranti to put the score at 1-0 Wilton.

The second half got even better. Wilton’s girls pressed Shelton really hard and kept the ball mostly in Shelton’s half, while Shelton counter-attacked by passing through midfield quickly. In only couple of minutes, Wilton girls scored three times, with two from Zane and one from Simran Bhutani to bring the score to 4-0. Stocker kept the goal safe for most of the second half, and Shelton scored one in the last minute to make the final score 4-1. A big applause goes to coach Spencer Overbeeke, whose wonderful command, as usual, led to the victory, as well as to the team’s managers Vivian Lee-Shiue and Mannish Patel, who keep the team running.

Despite a tremendous effort from the Wilton 2010 Boys Gold soccer team, they ended their game Sunday with a loss against Greenwich. Ben Cannavino started the team off in the goal and made several key saves. A strong defense in the first half by Rohan Saini, Kevin Garcia, John Mannix, and Sean Unruh helped Cannavino protect the goal. Andrew Demasi, Evan Ash and Topher Jackson in midfield put pressure on the Greenwich team, carrying the ball down the field several times. Wilton took several shots but after the first half was down by two.

In the second half, Alex Shiue took over in goal. He had many saves at the net, but Greenwich scored three more goals. The boys worked very hard, had many good passes and several near misses on the Greenwich goalie. With Coach Cardona’s support, the boys hustled until the end and never gave up. It was a great effort by the entire team.

In the second half Brynn Grasso and Katerina Cross continued the attack for Wilton, relentlessly pursuing the ball to set up goals for Ria Kurien and Leianna Cross. Coppola had the play of the day with a spectacular front handspring throw-in which led to a goal for DeStefano. Burton and Dean dominated the backfield to support Sullivan in goal holding New Canaan scoreless in the second half. Pattillo finished the scoring for Wilton to cap off the victory.

Wilton U10 Blue dominated their game Sunday against OGRCC Thunder. Luck wasn’t on their side as Greenwich snuck a goal in very early in the first half. Wilton consistently kept the the pressure on as Mario Coppola, Hugo Dall, and Gavin Levenherz created offensive strength but were unlucky with their several attempts on goal. The boys passed well, played together, and had control of the game. More attacking pressure was put on by Caio Thakur, Jake Albanese and Joshua Comiskey. Giacomo De Paulo, Sean Kaliski, Philip Jeschke, and Gavin Toohill played strong defense from the beginning and their passing game only improved as the game continued. Jack Hamilton played a consistent and impressive game in goal which helped Wilton keep the burden on Greenwich.

The Wilton Boys 2009 White soccer team posted a 6-1 win over Stamford on Sunday afternoon. The Warriors started the game quickly, with Hans Greene hitting a 6-yard strike past the diving keeper. Minutes later Greene scored again after clever passing from Neel Popli and Rocco Tripodi. Later in the half Greene completed his hat trick with an unassisted goal. Tripodi and Adrian Joseph also got on the score sheet, each with a goal of their own to bring the Warriors’ total to five in the first half. Defensively the Warriors held strong, with Mason Cilento and Samrath Dhamoon providing protection for Conor Filip in goal, who let just one shot past him in the first half.

The stellar defending continued after the break with goalkeeper Jeff Fox stopping everything that came his way, holding Stamford scoreless in the second half. The attack was led by Ryan Vermeulen, who scored off of his own rebound to make it six. Minutes later Vermeulen nearly scored again on a breakaway that was well defended by the Stamford keeper. The Warriors kept the pressure on throughout the game, encouraged by coach Anthony Ramirez, and finished with a convincing victory.

Wilton 6th Grade Blue played a tough Darien team on Sunday. The game got off to a fast start with the Warriors taking the ball first and driving down the field behind great blocking from Maja Driscoll, Cole Galante, Jack Huntley, Ryan Luchetta, Liam McKiernan, Ryan Meenan, Jack Santosky, Cole Siegel, Henry Soojian, Jaxon Thomas, and CJ Young. Strong runs by Cael Dexter, Luke Ginsburg, Jack Schwartz and Liam Snyder got the ball down to the 1-yard line. Will Cristini ran it in from there for the first touchdown of the game.

The Blue Wave answered quickly on their next drive putting the Warriors in an unfamiliar position–the first time they have trailed in a game this season, 6-7. On their next drive, the Warriors showed some poise driving down the field with a balanced offense of running by Schwartz, Dexter, Snyder, and Ginsburg and two key pass plays from Snyder to Ray Ferranti, (picture below) including a clutch reception by Ferranti on 4th down to keep the drive alive. After a successful kick by Ginsburg, the Warriors regained the lead, 14-7. On their next drive, Wilton found the end zone again on an efficient drive that featured key runs by Charlie Keller, Cristini, Ferranti, Luke Perna and Ryan Stocker. Ferranti finished off the drive with a 12-yard touchdown run. The Warriors found the end zone one more time, with Snyder punching it in from the 1-yard line and Ginsburg converting the extra point. Wilton’s defense was tough all day, with great tackling from many of the Warriors, including Cristini, Siegel, Dexter, Snyder, Ginsburg, Schwartz, Driscoll, Meenan, Ferranti and two huge pass breakups by Cole Galante. Darien got into the end zone one more time, making the final score 28-14 Warriors.

On a chilly Fall Saturday night under the lights at Fujitani Field the 4th Grade Warriors were set to clash with the Westport Wreckers. Wilton won the toss, and the defense embarked on a mission. With punishing tackles from Nick Skillin and Colin Faherty, coupled with an incomplete pass, the Wreckers went three and out. The Warriors’ offense took the field with Michael Lenz under center; the ensuing drive stalled in the red zone despite solid runs from Denny Dustin, Skillin and Faherty. The Warrior defense came back with strong secondary play by Liam Pierson, who deflected a pass, coupled with great tackles by Brady Corry and Michael Duarte. With twists on the line from Wyatt Hoffstatter, Emmett Sommer, and Lenz, along with solid play from August Furman, Colton Korpan, Wyatt Kreter, and Henry Snow, the first quarter ended in a stalemate after a Faherty fumble recovery.

The Warrior offense was firing on all cylinders to start the second quarter. After a Dustin pass to Corry, Faherty punched it in to make the score 6-0 Warriors. After another Faherty fumble recovery, the Warriors employed their Beast Package. The wedge moved steadily down the field with punishing line work from Cole Herbst, Jaxon Lin, Bly Christianson, Jack Condon, Sommer, Furman, and Hoffstatter. Finn Snyder kept the Wreckers’ defense honest on the wing as a pass threat. The drive was capped with a touchdown run from Pierson. After a Corry two-point conversion run, the Warriors were up 14-0. With strong tackling from Snow, Korpan, and Dustin, the Warriors defense ended the half.

The Beast Package took the field to begin the second half, and once again the wedge marched down the field, ending in a Corry touchdown run to make the score 20-0. Other second-half highlights include nice runs from Rivera and Pierson, a QB hit by Sommer, and a Dustin fumble recovery. The Warriors left the field empowered with a convincing win, fired up to travel to Darien next week to take on the Blue Wave! #5 Emma VanHeyst with the carry, with blocking help from #12 Kieran Wiseman and #33 Will Byrnes in Wilton 5’s 22-8 victory on Saturday over Darien White.