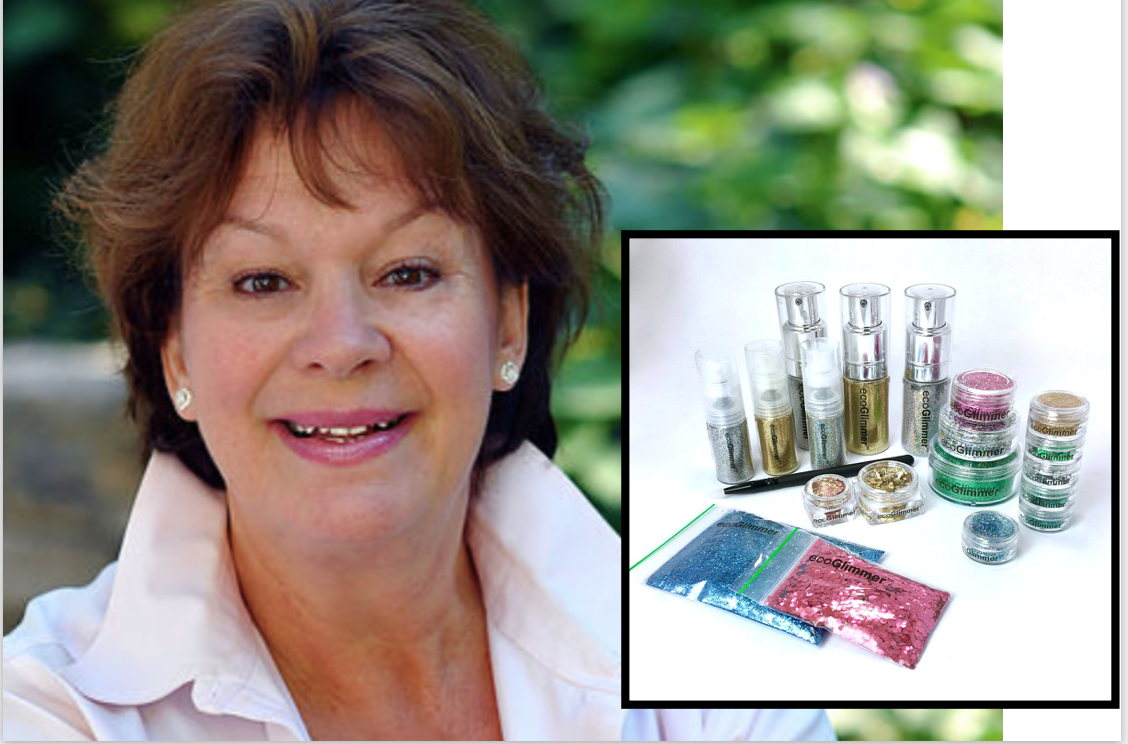 “We have launched. Come sparkle the world with us with biodegradable glitter.”

So reads the Facebook announcement for Laurie Davis’ new company, ecoGlimmer, which encourages fans to “glitter responsibly.” Dubbed “the Glitter Fairy” by none other than Martha Stewart, Davis has created a perfect extension of her crafting business based in a studio in her Wilton home.

EcoGlimmer is a new type of glitter made from cellulose, a sustainably grown, natural fiber from the eucalyptus and other plants. It contains no harmful chemicals, and is FDA-approved for cosmetic use on skin and hair.

Traditional glitters and most cosmetic glitters, are micro-plastics and take a very long time to break down, some say up to thousands of years.  EcoGlimmer is made from plant materials, which have minimal environmental impact, making it significantly different, and much better for our planet.

It’s not the first time Davis has recognized a need and applied her creativity to solving it.

A forever artist and former art teacher and graphic design director, Davis first honed her entrepreneurial talent when she was preparing to get married. Unimpressed with the selection of bridal headpieces that was available, Davis gathered some high-end faux flowers and made her own. Due to the wildly enthusiastic reaction to her creation–which has since become the typical response to Davis’ designs–she began selling bridal headpieces out of the trunk of her car.

After moving to Wilton and starting her family, Davis found herself in a position with which many parents are familiar when their children head off to pre-school. She needed teachers’ holiday gifts–a slew of them.

A big fan of German hand-blown glass fruit ornaments, Davis decided to try it out herself. Inspired by the association of apples and teachers, she began making fruit ornaments, adorned with ribbons and decorated with glitter. Davis found her niche.

Word quickly spread and Wilton’s Historical Christmas Barn was the first retailer to place an order. Davis soon became known around town as “The Fruit Fairy.”

“People started collecting my ornaments and I started doing boutique shows in private homes, as well as larger craft shows, such as the Westport Craft Fair,” she recalls. “It was great fun.”

And then, as Davis is fond of saying, “Martha happened.”

While attending the 15th Anniversary Celebration of Martha Stewart Living at New York’s Pier 94 in October of 2006, Davis spotted the famed domestic guru and walked right up to her and introduced herself as The Fruit Fairy. Executive producer Lisa Wagner’s ears perked up when she heard “glitter” and told Davis that she might be interested in having her on the show.

Davis was brought on the Martha Stewart Show for Valentine’s Day:

She was invited back two more times, once to demonstrate projects for Easter and another time for Halloween projects:

Last fall however, she started reading articles about the UK’s ban of glitter. Headlines screamed “Glitter is Litter,” which hit her very hard after working with glitter for over 18 years. Davis had always been fastidious with her glitter, using large roasting pans to catch the extra glitter to reuse so it didn’t end up in the trash.

In realizing that others might not be as careful, she looked into whether or not there were facilities for recycling glitter. She was disheartened to find there were none, but was thrilled to learn via her research that there was in fact a greener alternative to traditional plastic glitter.

While not yet mainstream, biodegradeable glitter has become a mainstay at music festivals and is used for face and body painting. Davis knew that as the Glitter Fairy, it was her responsibility to educate the general public about how bad traditional plastic glitters are for the environment as well as to spread the word about the availability of a biodegradable alternative. And so, she branded her own collection and ecoGlimmer was born.

“My glitter works just like traditional glitter for face and body painting as well as for crafting. You won’t notice a difference, but Mother Earth certainly will,” Davis explains.

And there is so much to choose from. From ecoGlimmer Face & Body to ecoGlimmer Crafts to SpritzGlitz Sprays, there is something for everyone who has a passion for glitter.

“Whether you are looking to glitter up your body for a music festival or stage performance, paint your face for a cheer competition, or work on a craft project that needs a little sparkle, ecoGlimmer is available in many custom color blends and sizes, from the finest powders to mega-chunky, in refillable jars or compostable bio-bags to refill your own containers,” explains Davis.

EcoGlimmer offers a gorgeous collection of proprietary blends and solid colors that Davis works very hard to develop in order to appeal to her different markets.

“The face and body painting festival customers are looking for dynamic and bright colors to complement their outfits or complete a specific theme, such as a mermaid or unicorn, or maybe just they love blue! They want chunky, shiny blends of various sizes and colors.”

“So, using my fine arts and painting background, I blend color combinations I know will work well together, representing the popular color schemes of blues, pinks, aquas, greens, purples, silvers, and golds.”

The non-aerosol pump SpritzGlitz sprays are also unique, and enable Davis to custom blend color combinations for individual sports and cheerleading teams, college sororities, or other groups who want to sparkle with their own custom color blend. In addition, the single-color sterling silver, silver holographic and gold sprays work wonderfully for prom twinkle and wedding sparkle. Davis likes to have as many different colors as possible on the color spectrum to be well-represented, and is only limited by the raw colors available to her.

Crafters, on the other hand, generally use more solid colors in fine hexagonal sizes to highlight artwork or create sparkle on an ornament or project. The ecoGlimmer Craft packaging features wide-mouth jars to facilitate easy use and to make it convenient to return unused glitter to the jar.

“I really hope the notion of swapping out plastic craft glitter for biodegradable glitter will catch on, and hope to get my Craft products into the retail market soon,” says Davis.

EcoGlimmer is available for purchase online and in town at Local Soul. For those new to glitter, Davis has an FAQ section on her website that answers everything from the actual makeup of ecoGlimmer to how to apply it, making it so easy to “go get your guilt-free glitter on.”