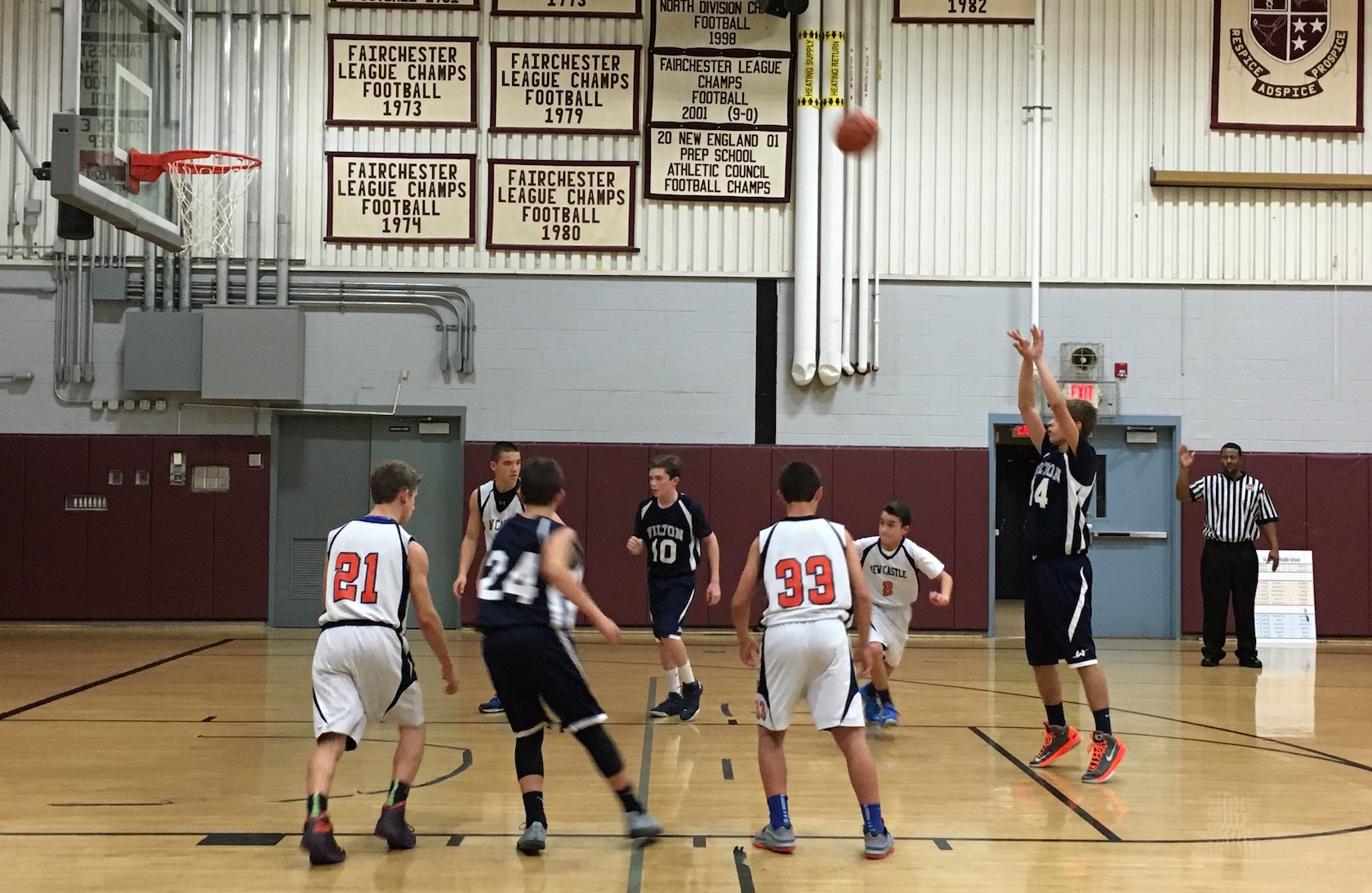 Each week, GOOD Morning Wilton will run news of weekend sports results from Wilton Youth Teams. Please send all stories and updates, along with a photo to editor@goodmorningwilton.com by noon on Monday of each week.

The GOOD Morning Wilton-sponsored 7/8 Boys’ team took on a big challenge this past weekend as they opened their season with six—count ‘em six—games. The boys entered themselves into New Canaan’s Joe Coppo Tournament, playing four games against talented 7A-class opponents, and as if that wasn’t enough, the schedule had them playing one FCBL league game and one FCBL non-league game. The boys put lots of mileage on the team bus Friday night through Sunday!

Coach Kevin Hand took his newly-formed team to a respectable 2-4 on the weekend, helping his team hold their own with a total score of 216 to 261 across all six games. The boys took down New Castle, a tough squad from Chappaqua, NY, for their sole W of the Coppo Tournament, 32-30. In their non-league FCBL contest, the GMW.com team outscored big 7/8B Shelton Black, 33-24.

The other four games were not so pretty, but several highlights gave the crew plenty to build upon going forward. Bright spots included a team high 38 boards from big man Maden Herve (pictured above), racking up 11 blocks while shooting a team high 54-percent from the field. Sean Sullivan proved he is not the guy to foul, leading the team with a laser-like 66.6-percent from the stripe, hitting six of nine tries while adding seven steals. You can turn to the Police Blotter to read about Andrew Travers’ team-topping 10 steals and eight rebounds. EJ Fasano led the team from behind the arc, burying 50% of his shots. Another baller not afraid to shoot was Sam Strazza, taking nine shots from the floor and 11 from way downtown, padding his stats with five boards and five steals along the way.

Other strong performers included Davis Cote and his seven rebounds and five steals; Josh White, crashing the boards with nine; and Ben Wiener and his seven steals while going 5-for-8 from the stripe. Ryan Kaufman was all elbows with four steals, and showed he’s someone to be feared on the court. Niko Kouvaris and Jermaine Vincent each racked up eight takeaways, but it was Vincent’s ginormous “No, no, no, not today!” swat against Shelton that brought the crowd to its feet.

The best news of the weekend for Wilton Hoop fans was the much-celebrated return of John McMahon, back on the parquet after a season spent on the IR. Great to have Johnny Mac back in Wilton blue, taking aim at the iron 27 times this weekend, 2nd-most shots fired for the team. Welcome back John!

The Wilton 5/6 Grade Boys team, sponsored by Tavern on 7, opened their season against a tenacious Stamford squad. Stamford started the game playing fast and aggressive, putting Wilton on their heels for much of the first quarter. Dylan Smith, Sean Wiseman, Jefferson Mitchell, A.J. Preisano, and Jimmy Luce helped to settle the Warriors down through the second quarter as Luce and Smith played strong defense, with Wiseman and Mitchell grabbing several rebounds. This allowed Wilton to control the pace of play and begin to run their offense. Preisano hit a three-pointer and Mitchell hit a jumper leading the Warriors on a 5 – 0 run to close out a difficult first half that left them trailing Stamford by a wide margin.

To start the second half, Conor Lillis and James Minnich took the reins of the Wilton back court and Preisano continued his scoring streak, hitting a three-pointer and a long jumper to extend the Warriors run. Smith continued to grab rebounds and Connor Cummings asserted himself underneath with several baskets in the paint. Andrew Zizzadoro, Minnich, and Shane Taubin then came on to run the offense with Colin Tsai playing good defense and Ethan Jackson grabbing several boards. As time wound down, Minnich had a strong drive for a basket, helping the Warriors to continue to claw their way back from a very large early deficit. Unfortunately, Stamford’s early lead was too much to overcome and the 5/6ers lost 66–20.

The Wilton 5th Grade Girls Travel Basketball team, sponsored by Little Pub, opened up their season this weekend at the Vincent McHugh Invitational in Darien.

Isabel Dinanno and Ally Rappaport combined for 8 points against New Canaan Red, while Mary Scally and Heather Plowright came up with multiple rebounds to control possession for Wilton. Defense led the way in this win, with Pattillo and Ava Fasano combining for 12 steals in a 14-3 victory.

The next three games showed the heart and grit of the team as they had to fight back from large deficits in each game. Mount Vernon’s height was the deciding factor in the second game with their second chance points ultimately dooming the Warriors. With scoring from Walden (10 points), Walsh (10 points), Lewis Cropper’s late 3 pointer and Reilly Sullivan’s pressure defense, they closed a 45-25 4th quarter deficit to a 53-45 final. Drew Philips had five rebounds.

The Wilton 6th Grade Boys played in the Joe Coppo Tournament this past weekend. The team, sponsored by Pinocchio Pizza Wilton and coached by Vic Cunningham, assisted by Sean Byrnes with Scott Cunningham, notched an impressive 4-0 streak.

In their first game, dominant opening play by Zarius Eusebe and solid rebounding-scoring by Jack Lynch clinched the 34-18 win over New Canaan.

Game two, against a big Mt. Vernon squad, started with the Warriors down early, but the team stayed in the game, led by Parker Woodring’s baskets. Max Andrews stayed tough against sizable opponents under the boards, with Dillon Mannix leading the front court defense.

In game three,  Greenwich didn’t stand a chance against the field goal accuracy of brothers Craig Hyzy and Kevin Hyzy. Grant Masterson dominated the pace of play on both sides of the court for a 51-33 win.

The last game saw Max Silva with a hot hand offensively and defensively notching a few steals, and Matt Giller with a field goal in his scoring retinue to lead the warriors in a 48-30 win over New Castle.

Wilton struggled early against a very fast and aggressive Weston team before adjusting to the pace of play in its 41-29 win. Against Greenwich Flame Red, Wilton started out fast and never let up in a convincing 57-15 win.

Wilton was sluggish in its Sunday morning game against Westport PAL, trailing 10-0 after two minutes and 15-5 at the end of the first quarter. Wilton rallied, sparked by three-point shooting, to take the lead at the half, and held on to win 50-43.

Wilton defeated hard-charging Darien 63-32 in the final game of the tournament.

Wilton played solid man defense all weekend, with outstanding help-and-recover principles to stifle its opponents. Full-court man press helped turn the Westport game in its favor. On offense, the team did an outstanding job of sharing the ball, with most of its baskets resulting from assists. Wilton made many three-pointers because shooters were wide open after the ball quickly changed sides of the floor or was passed out after entering the post. The team’s player movement put constant pressure on the rim, leading to multiple layups.

The Wilton 5/6 Girls basketball team, sponsored by the Wilton Deli, kicked off their season this weekend with two action packed games. The girls played Danbury on Saturday. Katie Umphred, Grace Williams, Kathleen Lamanna and Kathryn Cronin were the engine of the offense. Megan Hanny and Allie Giller held off Danbury throughout the game. Danbury came out on top, however, the Wilton girls remained focused to the end.

On Sunday, the girls had a loss in overtime to Darien. Jamie Leventhal was great on offense and Charlotte Casiraghi landed her foul shots like a pro! Maddie Ratcliffe, Georgia Russnok and Sawyer Pendergast fought Darien off with stifling defense. The Wilton’s team resolve was impressive, and an exciting season awaits!

The girls came out strong with a 27-12 win versus Greenwich Select. Key defensive plays led by point guards Amelia Hughes, Leah Martins and Olivia Rossi led to a number of breakaways and layup baskets.

Throughout the four games Ellie Coffey’s outside shooting was outstanding. Ellie Copley, Catherine Dineen, Martins and Hughes hit beautiful jump shots from all areas of the court and down low, Bella Andjelkovic and Erynn Floyd led the way off the back board with rebounds and baskets.

This season is the first with a full-court press throughout the game. The girls quickly learned to not only beat the press of their opponents, but to use it to their advantage. Forwards Morgan Lebek and Gracie Kaplan used their speed to break open the court and the team utilized all players with great inside passing and looks that caught their opponents off guard and led to some impressive scoring.

The 5th Grade Boys Wilton Warriors, sponsored by Abercrombie, Burns, and McKiernan Insurance Inc., participated in the Vince McHugh Jamboree on Dec. 6 and 7.

On Saturday they had a win 34-33 against Darien YMCA Blue, and a loss 20-40 against New Canaan Black.

Sunday’s back to back games were against Darien YMCA White and Greenwich Flame. From the opening tip in both games, Wilton played an aggressive 2-3 zone defense. Tommy Walsh and Will Sullivan had key steals leading to fast break scores by Spencer Liston and Tommy McKiernan. Interior defense led by Jackson Duncan, Griffin Turner, Andre Weist and Alexander Reyes kept the ball out of the paint and stymied the opponents big men! Wilton utilized a trapping 1-3-1 defense in both games which created turnovers and many steals for Ryan Preisano and Peter Grandolfo. While the overall shooting percentage was lower than normal, the Warriors were able to pull out two wins on Sunday; 28-15 against Darien YMCA White and 42-21 versus Greenwich Flame.