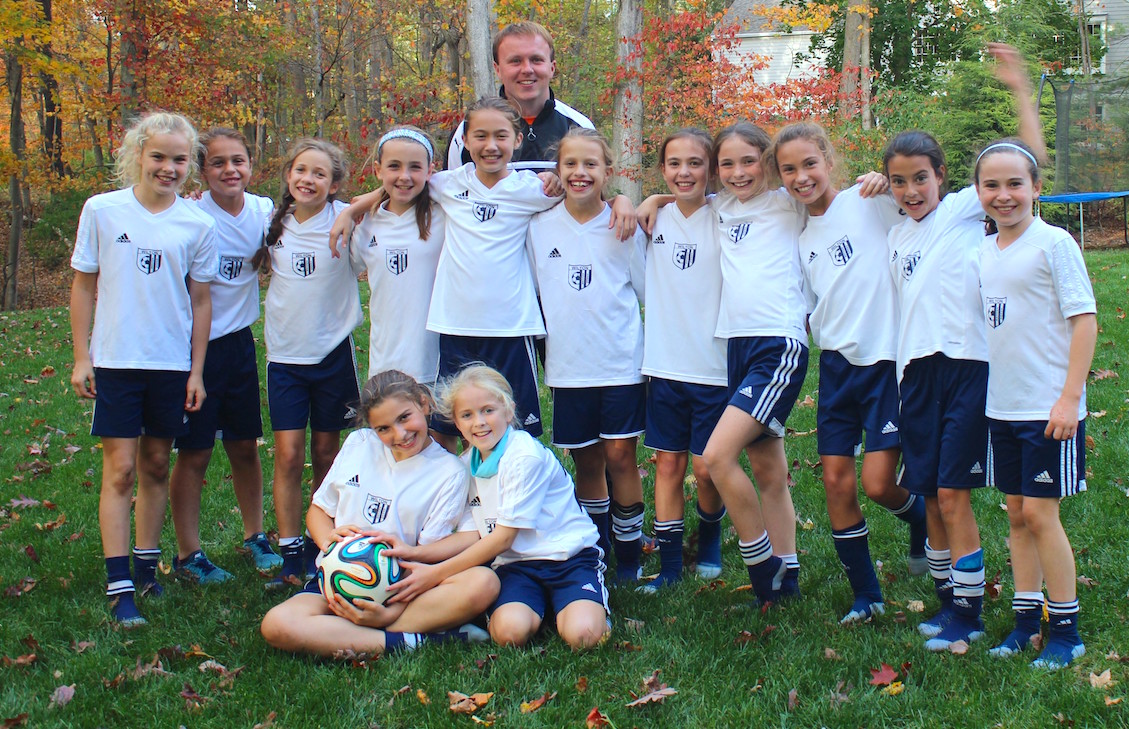 The Wilton GU11 Blue soccer team advanced to the CT State Cup finals by beating Easton Redding United, 5-0 on Saturday, Oct. 28 in at home in Wilton. Wilton will face New Canaan in the championship game on Saturday, Nov. 4, at Curtiss Park in Simsbury, CT. The State Cup is a single elimination tournament that began in September with 54 teams participating throughout the state of CT.

Weather conditions were ugly on Saturday, but the game went beautifully for the Wilton 5th Grade Blue Football team. The Warrior defense was tough, holding Aspetuck without a first down in the game. More than half of Aspetuck’s offensive plays went for negative yardage as the Warriors consistently got into the backfield and brought down the Aspetuck backs. Cole Siegel, Cael Dexter, Liam Murphy, Liam Snyder, Cole Galante, Luke Ginsburg, Jaxon Thomas, Maja Driscoll, Ryan Meenan and Jack Schwartz all made tackles for a loss for Wilton.

Despite the rain, the Warrior backs did a great job holding onto the football and had no turnovers. Schwartz, Dexter, Snyder, Ginsburg, Nate Jackson, Charlie Keller, Ray Ferranti, Will Cristini, Ryan Luchetta, James Jackowski and Ryan Stocker all gained positive yardage behind terrific blocking from Jack Huntley, Liam McKiernan, Vito Banner, Driscoll, Meenan, Murphy, Jack Santosky, David Schubkegel, Siegel, Henry Soojian, Thomas and CJ Young. The scoring started on Wilton’s first possession as the Warriors marched down the field on 13 consecutive running plays capped off by a 1-yard touchdown run by Dexter. The second touchdown came on the next drive as Jackson ran it in from 4 yards out. Two successful kicks by Ginsburg put the Warriors up 16-0 at the half. On the first play of the second half, Schwartz ran 70 yards untouched for Wilton’s third touchdown. The final touchdown came on a 40-yard pass play from Snyder to Galante. The final score was 28-0 and the 5th grade Warriors are moving on to the semi-finals.

While the Warriors dominated time of possession and field position in the first quarter, the Tigers took advantage of a fumble to jump ahead 0-7. The second quarter began with strong tackling from Keegan Kazan to get the ball back for the Warriors. The ensuing drive featured impressive discipline from the offense, as they were able to draw the Tigers off sides by mixing up the snap count, while Colin Faherty and Denny Dustin showed off their ability to run the ball both inside the tackles and to the outside. The drive was capped by a huge touchdown run from Nick Skillin. The first half ended with a great defensive effort from Kayden Kazan, Sawyer Fasano, Dustin, and sealed by a huge gang tackle with Wyatt Hoffstatter sealing the stop.

The second half began in a stalemate, with each team stopping each other’s drives. The Tigers finally broke through with another touchdown and a kick, making the score 6-15. Michael Duarte made several impressive tackles, coupled with solid line play on both sides of the ball by Noah Patania, Hayden Leitten, Matthew Fogarty, Emmett Sommer, August Furman and Michael Lenz. Lenz also showcased his impressive skills as a center, snapping to a variety of players from shotgun with incredible accuracy.

While the Tigers started the fourth quarter with another touchdown to make the score 6-21, the Warriors were not ready to roll over. After dueling for field possession on subsequent drives, the Warriors moved the ball downfield with powerful between the tackles runs from Dustin, to be finished by a beautiful 35-yard touchdown pass from Skillin to Faherty. A Faherty kick made the score 14-21. Unfortunately time ran out just as the Warriors were mounting an incredible comeback against a powerful opponent.

Despite the loss, these guys had an incredible season, and have grown so much as players and teammates. These Warriors hold true to the saying, “Football is Family!”

The Wilton Steelers won their first-round playoff game in convincing fashion over the Westport Patriots Saturday morning. Wilton’s Steel Curtain defense didn’t allow a single first down the entire game led by the suffocating pass defense and flag grabbing of Ben Zappaterrini, Alex Cocca, Samar Rokkam, Miki Fryer, and Annie McMahon, and highlighted by an interception by Jude Gouveia and an interception and touchdown return by Brody Hess. Wilton’s balanced offensive attack was unstoppable and included a pass reception by Embrey Dzik and touchdown and extra point passes from Patrick Heffernan to Michael Fischetti and Adam Daversa and from Luke Umphred to Jason Sherrick. The Wilton Steelers will be taking on the Westport Cowboys in the semifinals Monday night.