Home Community 5 Talented WHS FAPA Award Recipients: Where Are They Headed Next? 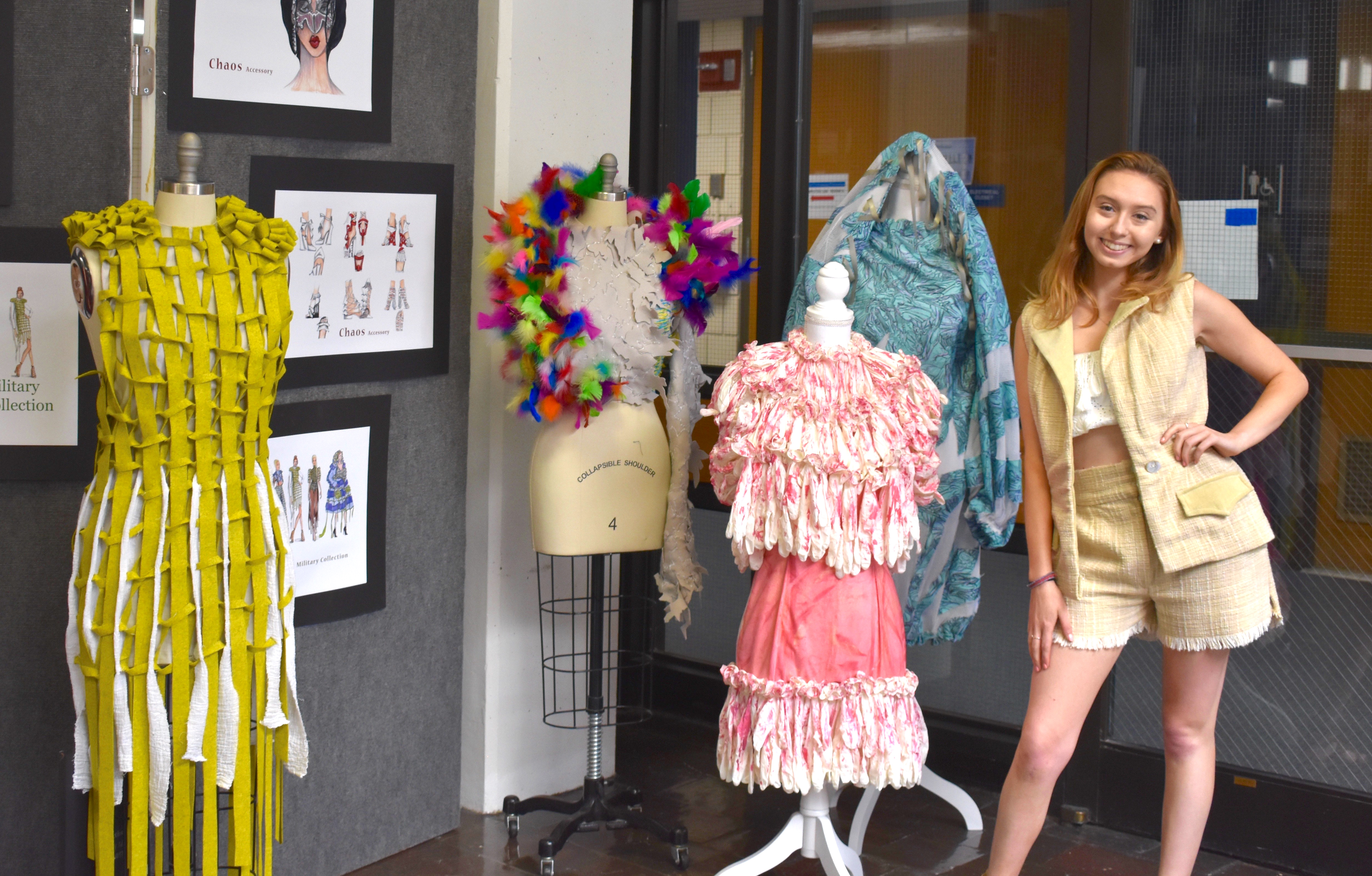 On the evening of Wednesday, May 23, several Wilton High School students were acknowledged for their artistic talents at the Fine and Performing Arts Awards ceremony. A variety of awards were given for achievement in the span of diverse media–from ceramics, fashion, photography, drawing, painting and sculpture, to choir, orchestra, and theater.

GOOD Morning Wilton spoke with five seniors who were proud recipients of some of these prestigious awards, to learn how they each developed their talents and how they plan on continuing their craft on the next step of their journey after graduation. Jeremy Wong was the recipient of three Scholastic Art Awards–one in the ceramics category and the second in the ceramic metals category. He was also awarded the Charles A. Dana Award, as well as Ambler Trust Scholarship in honor of Rusty Hurd, a retired Wilton High School art teacher and club advisor of 42 years.

For Wong, ceramics run in his blood. “My grandmother is a potter, so I always used to do ceramics with her,” he says. However, he recounted that he began taking the art seriously when he took his first ceramics class during his junior year of high school.

Wong holds ceramics particularly dear to his heart because of its unique versatility. “I love how much variety the medium has. You can really do anything with it,” he says.

Of all his pieces, Wong’s favorite work only has a photograph to commemorate it. “My favorite piece was an unfired clay installation I did in the ceramics room in the fall. I attached clay textures to a concrete column. Since it was unfired, the piece fell down after a few days of drying. I thought this was a really interesting concept, which was taking a typically permanent material and creating something that can only be around for a set amount of time,” he explains.

He credits Wilton High School for enabling him to practice his passion for ceramics, emphasizing that, “The school has really amazing facilities, which have given me the space to experiment and be creative.” He also adds, “My teachers were so supportive of me trying new things and pursuing projects that were challenging.” Looking ahead, Wong is enthusiastic about attending the School of the Art Institute of Chicago for Studio Arts in the fall. Kaylynn Gunzy is a woman of numerous creative capabilities. The awards she graciously accepted at the FAPA ceremony–the Julia Robb Scholarship from the Wilton’s Woman’s Club, the Stamford Art Association Award, and two Scholastic Art Awards for sculpture–attest to that.

In fact, it’s hard for her to pick a favorite creative outlet.

“It’s very difficult to narrow down my favorite. I think I love them all equally; they reflect my inspirations and moods at that time.” Outside of the AP Art classroom, Gunzy devotes much of her time enriching her craft. As a junior, Gunzy took a course at the Fashion Institute of Technology where she learned to draw clothing and figures.

Besides the course, Gunzy says she gained much of her experience from working. “I’ve been extremely grateful to work with some of the greatest architects such as Dinyar Wadia of Wadia Associates in New Canaan, to fabulous interior designers such as Patrick Mele, with whom I’m currently interning,” Gunzy says. She notes that being surrounded by creatives like Wadia and Mele is what drives her to pursue her career.

For Gunzy, the inspiration behind a lot of her work is derived from a variety of people, places, and things, as well as current movements like feminism and mental health. “I’m very grateful to grow in a generation that speaks it’s truth loudly, so I take advantage of this opportunity by creating art that symbolizes my beliefs,” she says.

Her favorite piece she created in AP Art this year was a sculpture made out of Polaroid negatives that she salvaged at a flea market. “I love the idea of refurbishing old materials and giving them a new purpose,” she says. Coming this August, Gunzy will attend Parson School of Design In New York City for Strategic Design and Management, a major that “will allow me to launch and lead design-driven organizations in the complex global economy,” she explains. Maggie Cummins was one of the winners of the Wilton High School Theater Department’s Producers Award. Cummins saw her first Broadway show at the age of six, but her true appreciation for theater took off at the age of eleven when her aunt passed down a box of old playbills.

Of course, any successful production requires not only the actors on the stage but a whole team of people working behind the curtain as well. “As a kid, I had really terrible stage fright, so I just naturally drifted to the backstage side of things,” she says. Freshman year, Cummins did tech for the high school’s spring musical, Camelot. Her endeavors as a stage manager began her sophomore year.

“Building productions from the ground up is always really fascinating. I get to work with practically everybody involved to get the show to run smoothly,” she explains. In Cummins’ eyes, the beauty of stage management is “watching everything come together like the pieces of a puzzle.” One of Cummins’ biggest inspirations is quite ironically, an actor. “Lin-Manuel Miranda wrote and starred in Hamilton, and I was lucky enough to meet him in person after I saw the show in 2016. He was so incredibly nice and he helped me realize that I can actually make an impact in the theatre community,” she exclaims.

Cummins has acquired quite a few skills from her four years of experience in stage management. “Working in this theatre program has taught me how to effectively communicate. The whole point of my job as a stage manager is to make sure every part of a show works in tandem with all the other parts,” she says. “Since we’re a mix of students and professionals, it’s really enjoyable to work alongside my peers while also learning from the adults.” In the fall, Cummins is headed to the University of Connecticut where she is thrilled to be pursuing Theatre Studies. Katherine Psaltos took home a plethora of awards on Wednesday including two Scholastic Art Awards for her fashion pieces, a Stamford Art Association Award, a PTSA Book Award for fashion, and an Ambler Trust Scholarship.

Throughout Psaltos’ life, her mother preached to her that she should be really good at one thing because she is passionate about it. After tearing her ACL in gymnastics in seventh grade, Psaltos realized that athletics weren’t her calling. “If I wanted to be the best I could possibly be at a particular craft, I wanted it to be something that I loved,” she explains. That is when Psaltos’ interest in fashion piqued.

Psaltos’ idol is fashion designer Iris Van Herpen. “She 3D prints all of her materials and makes pieces with them. Her designs are so incredible and unique. I have a lot of respect for her because she takes so many risks,” she says. Van Herpen’s out of the box style is clearly reflected throughout Psaltos’ work.

The most challenging piece Psaltos has created thus far was from her Chaos collection. “ I made two men’s dress shirts out of red wool gauze and then I draped them on top of one another to in a wave-like formation to make a vest. Then I used a 3D printer to make chain details to attach to the piece,” she explains.

Aside from taking AP Art this year, Psaltos has also taken classes at Parsons School of Design and the New England Fashion Design Association in Norwalk, which she says, “allow me to foster connections within the fashion community and provide me with competition to further my skills.” Psaltos is looking forward to studying Fashion Design at Parsons School of Design in New York City this fall. Jonah Hirsch was presented with the John Philip Sousa National Band Award, the pinnacle of achievement in any high school band, to recognize his “superior musicianship and outstanding dedication.”

Hirsch began playing the clarinet in fifth grade at Cider Mill School, and seven years later he attributes many of his skills to his high school band teachers who he believes have served as musical mentors. “I’ve learned a lot about how to play within the context of an instrumental section, and how that section should fit within an ensemble.”

His favorite memory from high school band was when the United States Army Field Band performed at the Clune Auditorium last year. “They are a world class band, with a unique history connected to the armed services,” he says. Hirsch, as well as a few others, had the unique opportunity of performing The Thunderer, a Sousa march, with the band and meeting many of its members.

As for the Wilton High School band and its contributions to the community, Hirsch says, “I think marching band is definitely a valued tradition in the football season. Sometimes at away games, we make up the bulk of the Wilton crowd, and everyone seems to enjoy the halftime shows.” He adds, “The Memorial Day Parade is actually the largest performance of the year for any WHS music group, so I think that also represents a place where the program is involved and enjoyed by all of Wilton.”

Aside from the clarinet, Hirsch plays the guitar and recently picked up the keyboard. He will attend Dartmouth College in the fall and will “definitely audition for a wind ensemble and orchestra program, and also try to take classes in music theory and composition” over the course of the next four years.