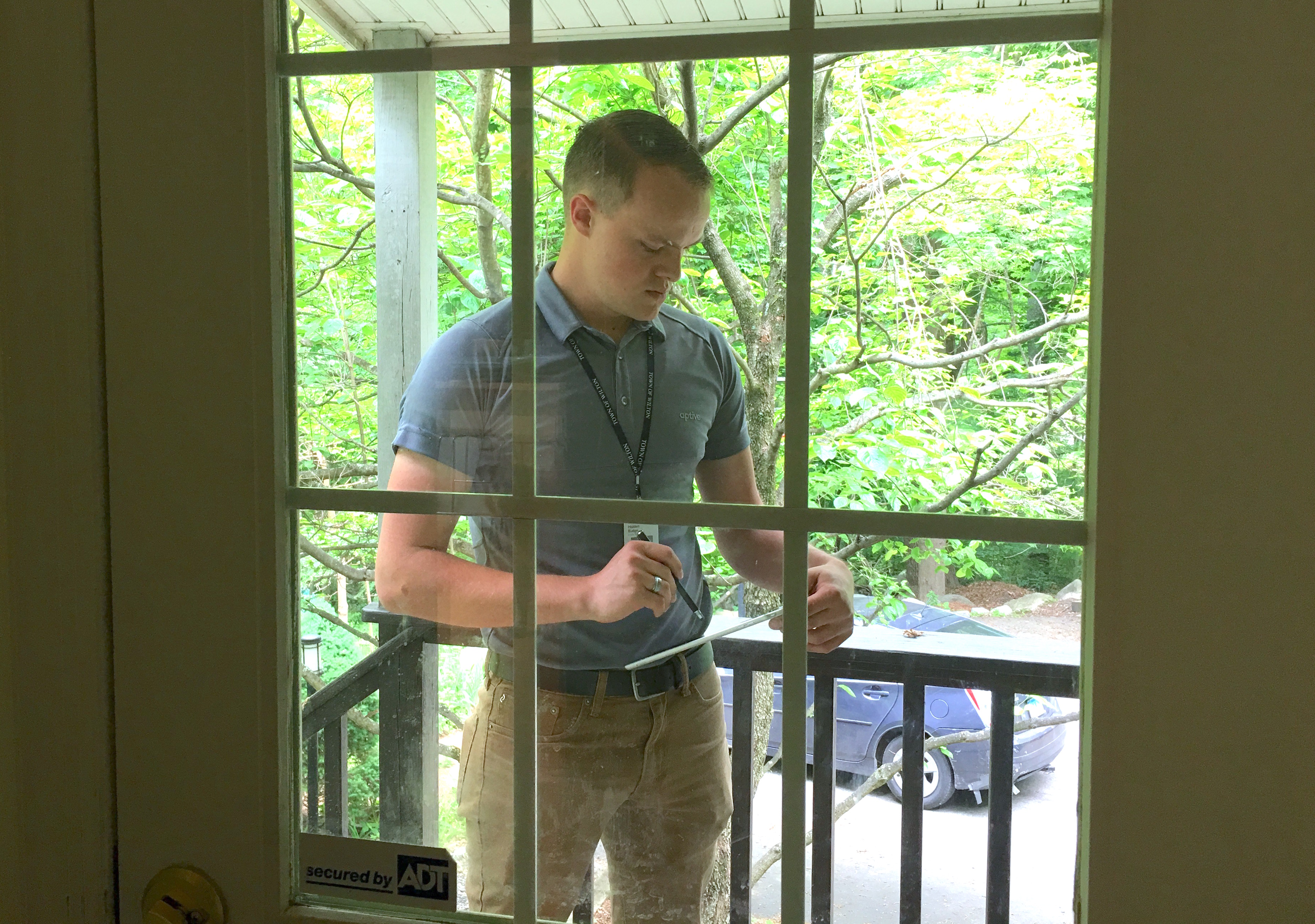 The peddlers checked in, but they didn’t check out.

Until Tuesday, June 5, Aptive representatives had been soliciting legally with permits they’d obtained from the Police Department as allowed by town ordinances. The company had approximately 25 individuals registered and permitted through the Wilton PD to do so.

But on Tuesday afternoon, Wilton Police Chief John Lynch suspended those permits when it was discovered that those same representatives weren’t licensed with the state.

According to First Selectwoman Lynne Vanderslice, police officers reached out to the State Consumer Protection Agency to inquire about Aptive. Wilton officers were informed that each of Aptive’s sales representatives were required to obtain a particular license from the CT Department of Energy and Environmental Protection (DEEP). However, cross-checking the names of the Aptive solicitors working in Wilton with the DEEP list of licensed pest control sales reps, Wilton police officers discovered none of Aptive’s permitted vendors had that particular license from DEEP.

Police immediately contacted Aptive and advised the company representative that the company was in violation of state statute and would be charged if anyone continued to solicit. According to a statement from Vanderslice issued at around 6 p.m. Tuesday evening, Aptive agreed to stop soliciting in Wilton.

However, GOOD Morning Wilton saw several posts on social media (Facebook) made by residents reporting that they continued to receive solicitations and sales calls at their homes from Aptive sales reps, even beyond 6 p.m. Tuesday. Wilton Police Captain Rob Cipolla reiterated that residents should call the police department if any Aptive representative shows up and tries to make a sales call. Anyone discovered, Wednesday or thereafter, with a suspended permit should be reported to the police department at 203.834.6260. Vanderslice also said that any questions related to the suspension of the permits should be addressed to the Police Department’s Chief Information Officer, Lt. Robert Kluk.

“I want to thank the Wilton Police Department and Chief Lynch for their diligence in responding to residents and for their commitment to our community. I also want to thank residents for contacting us about this and other matters. Whether through direct communication or the use of SeeClickFix, it is only through such communication, that employees of the town can effectively address resident concerns,” Vanderslice said.

Last week, Vanderslice told GOOD Morning Wilton that town officials would re-examine peddling ordinances in light of issues raised by the latest events. While door-to-door solicitation and peddling is allowable as free speech, the town does have certain limits spelled out in its ordinances. Any proposed changes to ordinances would have to be submitted to a Town Meeting vote.

Town counsel Ira Bloom is currently researching whether further limits could be placed on commercial solicitation.

During Monday night’s Board of Selectmen meeting, Lynch said one issue that should be examined is the time of day door-to-door solicitation is permitted.

“One of the glaring deficiencies in the ordinance is the timeline. It currently says a half-hour after dusk. Dusk is half-hour after sunset–that’s currently 9:15 or 9:20 p.m.. I don’t know that it’s appropriate, and I have heard from residents and well as Lynne that that’s completely inappropriate for somebody to be knocking on the door, it’s almost dark and it’s 9:15 p.m.. Maybe set some defining hours, and look at what other communities are doing,” Lynch told the BOS members.

Currently only commercial solicitors are required to register with police. Political, religious and non-profit solicitors do not have to register or seek a permit.

Only hours after last Thursday’s publication of GMW‘s story last week on the recent rise in resident complaints about persistent sales calls, one of those very same persistent sales reps from Aptive knocked on the door of the home of GMW editor Heather Borden Herve. (He arrived on his Segway, as residents have reported seeing on other occasions.) Wearing a Wilton Police-issued permit that bore his name, the sales rep used many of the same methods that other residents had complained about in social media discussions–methods that might not have necessarily been illegal or misrepresenting the company, but that were questionable.

Below are excerpts from a 15-minute conversation that GMW recorded.

He was exceedingly interested in gathering personal information. He did not want to leave without getting our identifying data–a phone number, an email, even a photograph of a bill from our current pest control company. He repeatedly pushed for this information. He even promised a rate decrease if only he could take a photo of that bill. Even when I expressed that it made me feel uncomfortable, he persisted.

GMW:  I don’t know that I feel so comfortable having you take a picture of something.

Sales Rep:  Oh, sure, and it’s not anything that has to have any sort of like personal information. … even if it’s just something that says like so-and-so Pest Control, and your name. Then my company knows that I’m giving a switchover rate to a switchover customer.

Even when I repeated I didn’t want to give personal information, he continued with the hard sell.

Sales Rep:  So what was your first name, ma’am?

GMW:  Same thing. I’m still not comfortable giving out personal information. Do have any materials you could leave for me that I could-

Sales Rep:  We don’t carry the brochures. I have all of the information. I do love a savvy consumer though. It’s good to know what you’re getting into beforehand. That’s actually why we have the unlimited data plan out here. Have you ever looked up the Better Business Bureau before?

He claimed that he had signed multiple neighbors, mentioning some by name. The names he gave weren’t recognizable–one was even simply a one-named ethnic name–but he mentioned them several times.

“…a bunch of the neighbors have been working with other companies, but they’re just giving me a shot instead, so I’m doing a whole lot more for them out here in the yard and what not. …Actually there’s like 22 in the general area that I’m helping out, right?”

He continued to press for personal information, even after being told that was an uncomfortable prospect–and refused to give his own contact information beyond his name. He also used the word “guarantee” a lot.

Sales Rep:  The times that we have open to come get that taken care of tomorrow, as early as about 10:00 or later about 4:00. What’s best for you?

GMW:  Like I said, I want to talk to my husband. How do we get in touch with you if it’s something we’re interested in? I take it just through the website?

Sales Rep:  Sure. Now through the website you’re going to be paying a lot more, right? My promotional discount I’m running is because we do have those spots here open available. Normally my service is so good that to send a separate truck it’s a full $239, and then quarterly at $145. Like I said, if I can help you out we’d do that switchover rate. If it makes you feel better, you could email or text that picture of the switchover proof to my office, whatever is best for you, but just as long as we’re able to see that, then we do that first one on the house and just $99 a quarter.

Sales Rep:  I don’t want to see you missing out on hundreds of dollars in savings, and that’s just because we’re in the area anyway, we’ve got some routes to fill, and we’d love to help you out, right?

GMW:  You said you have an email address?

Sales Rep:  Right. The company sends you an email as a confirmation as a customer. So that’s when you’d have all of the information that we’re able to send you, to show you what we’re taking care of. But of course that’s as we get a spot booked for you, because it’s just not something that we’re able to hold these spots and hope that somebody is going to be jumping on, because they’re just valuable, and you know how bad the bugs get this year, right?

GMW:  Look, I don’t want to … I wouldn’t book anything anyway. Like I said, I want to talk with my husband.

GMW:  How do I reach out to you rather than … Again, I’m not comfortable giving out information, so how would I get to you?

Sales Rep:  Sure. I am actually in the area until the end of the day. They have me working until about dark, pretty busy until then. But if I just make this my last stop, I’d love to be able to talk with him as well, see about-

Sales Rep:  Well, I tell you what, it’s usually just not the way that we do it because it’s just hard to have these spots open after a day, but if you just give him a call here in the next couple of few hours, I’d just put down a number to give you a call back later this evening and see if we get the go ahead. If so, we’d fill it out, get you taken care of. If not, then we’d just leave you alone. But is there just a good phone number that I could have to give you a call back later this evening?

GMW:  I can’t give out my information.

Sales Rep:  Not even a name or a number?

Sales Rep:  Well, there’s hundreds of neighbors that we’re taking care of with all sorts of information that we’re 100% honest and forthright company, right? All these folks … You know, it’s just how business works. You order something on Amazon, you have to put in your name, your address, your credit card number, and then the product comes. We just can’t show up, do the service or whatever, and then hope that we get your information after it’s-

GMW:  Oh, I’m not asking you to do the service at all, you know, until I’m able to talk to him and see a little bit more.

The back-and-forth continued, for close to 15 minutes, when finally the sales rep provided a way to contact him:

Sales Rep:  Now I’d love to be able to get in touch with you here within the end of the day. Is there any way I can do that?

Sales Rep:  Right. Well, I’ll tell you what. If you promise me you’ll talk to your husband, give it a fair shot, look it up, and give me a call back at your soonest convenience, I’ll leave you with my number. Does that sound good?

While door-to-door sales might be a rare occasion in Wilton and a not-too-frequent nuisance, this particular sales rep was very persistent guy. Other Wilton residents reported sales reps that didn’t take no for an answer, who knocked on doors even after being told to go away, and who were very determined to talk to residents even very late at night.

Other residents have said that the Aptive representatives they talked with were much less insistent and more cooperative. Clearly, several different representatives had been criss-crossing town.

The story took a strange turn Tuesday when Police said that a Segway was reported stolen out of the back of a vehicle belonging to an Aptive sales rep on Friday afternoon.