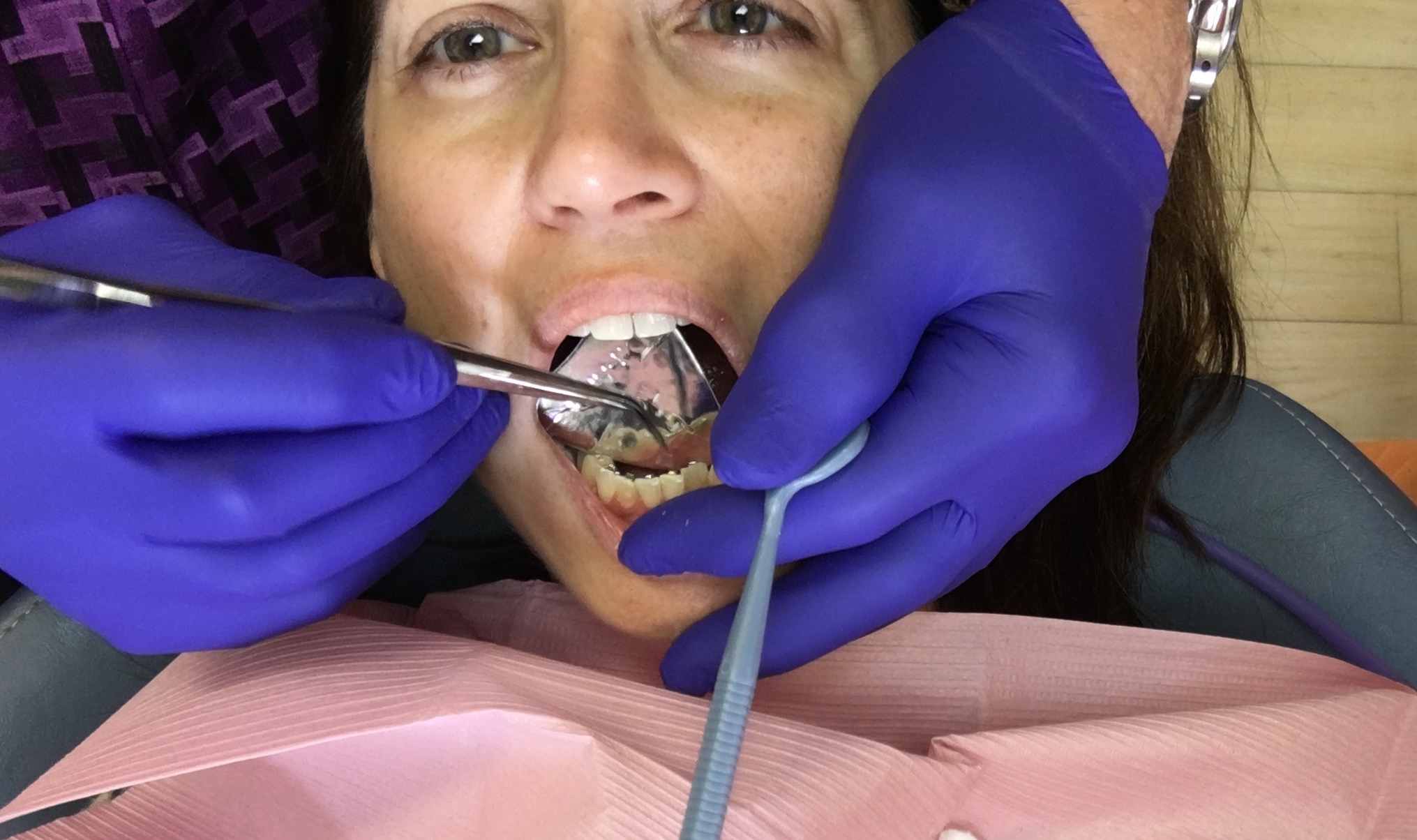 After a short hiatus, we’re back with Week 6 of  GOOD Morning Wilton editor Heather Borden Herve‘s “50 Weeks of Change” series, “A Year-Long Journey of Rediscovery, Renewal and Rededication,” in commemoration of her 50th birthday this year.

At age 50, I feel like a teenager again. While I am still going strong on the new nutritional steps I started in Week 1, and enjoying some other things I’ve been trying (which you’ll learn about in upcoming “50 Weeks of Change” stories), that has little to do with me getting in touch with my teenage self.

So what is it then?

Like a lot of people, I had braces when I was younger. But in the last few years, I noticed my teeth, primarily the bottom ones, have shifted–a lot. Call me vain, but in pictures or the GMW Facebook videos I’ve been doing, it’s all I see. The orthodontist my children see is Dr. Gregory Sanford, who has been practicing in Wilton for almost 30 years. I mentioned it to him on one of my kids’ visits. Next thing I knew, we mapped out a plan to fix what irked me so much about my teeth. A little time later, there I was getting brackets put on my teeth, just like it was 38 years ago.

This time though, it’s a little different. The braces are on the back of my teeth. If I didn’t tell you I had them, you wouldn’t know.

As a friend of mine, who also had the same kind of braces recently, said when I told her I didn’t know she had them, “That was the whole point. I didn’t want anyone to know.”

In fact, Sanford says he sees a lot of adults in his practice, for very similar reasons as mine.

“Most adult patients that come in have found that their lower front teeth are the ones that have slipped. Teeth move as we age–every year they’re moving a little bit due to habits such as bruxing (grinding from right to left) and clenching and wearing our teeth down. That’s partly genetic, it’s partly due to breathing issues, being able to breath through your mouth. They wear down, and they slip, and so once the lower incisors start to slide by one another, there’s no tooth on the right or the left that’s really supporting them. It’s like soldiers standing shoulder to shoulder. One falls out of the line and then they all start to collapse and continue to crowd. Visually they’re unsightly, and they get food caught in them, you have receding gums, and as they crowd they start to contact the upper teeth. And now your top teeth are starting to move, because the overbite deepens as we age. And so most people are alarmed when they see their lower teeth crowded. But once they feel contact with their upper teeth, they get very concerned, and they come in,” Sanford says.

The majority of the time, adults only need brackets on just the lower six to eight teeth to line up the incisors. Sanford says treatment time can be as short as four to six months, or nine to twelve–but it rarely extends more than a year. The technology has changed too for this kind of treatment. Not only are the brackets smaller than those used on children, but the wires orthodontists use in this method are “smart.”  They are pre-formed wires that have a built in memory and are geothermal–that means when they heat up to the body temperature, they actually tighten.

So what are the steps that are involved that are different for adults than for a pediatric patient?

“The first thing is that the dentist has to make sure that there are no cavities or restorative procedures that need to be done, and check the gums to make sure they are healthy, and there are no pockets or areas of inflammation. If there are, I usually will refer a patient to a periodontist to have their gums and bone levels checked, because it’s very important to move teeth with healthy gums and bones. If you move teeth that have gum inflammation, you can actually cause more bone and gum loss,” Sanford says.

The next steps involve pictures, x-rays and getting a model of your teeth made. Technology is changing in that area too, says Sanford.

“We do impressions, but those impressions are being replaced now by scans. An orthodontist can use a scanner to scan your mouth and that will go into software that a model will be produced of your teeth with a 3D printer. Lots are changing now in the technology, and it’s a very expensive investment, so some of us are waiting until things settle out. But impressions of your teeth eventually will be a thing of the past.”

Putting on the brackets is relatively easy–you do need to tolerate having your mouth held open for several minutes for the bracket adhesive to dry. Appointments are generally every three to four weeks to make adjustments to the wires. “Most adult patients coming in for treatment that need to have their lower upper teeth aligned, opt for these brackets, rather than the conventional on the outside ceramic brackets–probably 80% of adults are being treated with these now. And it’s nice, because we’re really treating the front teeth and not all the teeth. For a lot of patients, I don’t want to change their bite in the back. That’s what they’ve had for years. So I just really want to realign their front teeth. For not only cosmetic reasons, more importantly for the health reasons of the bone and gum,” Sanford adds.

Ah, so it’s not just for vanity? Sanford has given me even more of a reason for this change.

“It’s really done primarily for improving the health of the gum and bone, and hygiene and keeping your teeth clean, because we know that crowded teeth trap more food. And we know that crowded teeth have more gum recession, particularly on the lower front teeth where the bone and gum are very thick. That’s where most people have that problem,” he explains, but adds, “That’s the medical reason, but most patients are motivated because of the look of them and the cosmetics. We can’t deny that that’s a very strong motivator. Teeth that are crowded do not reflect light the same way as teeth that are lined up. When the teeth are lined up, then we can bleach them, but many times they reflect light better and there’s no need for bleaching, they just look better.”

So are there any downsides to getting braces as an adult?

“As long as the bone and gum is good, the support, there’s really no downside to treatment. I would say 99% if not 100% of people are happy that they went through it. The time goes quickly. And one thing they tell me is that once they have their lower teeth realigned, the first thing they notice on a person are their lower teeth. Before you might have noticed them if they were really bad, but now you just can’t help it,” he says.

There has been an adjustment for me. For one thing there’s a minor effect on the way I speak. There’s an occasional lisp for the “TH” sound if I’m speaking too fast. But Sanford is right when he says that patients adapt.  “Give it a couple weeks. But I would say that you always sound worse to yourself than you do to other people.”

The same goes for some minor irritation to the tip of my tongue. “Patients have a tendency to touch the brackets a lot with their tongues because they’re such a foreign body in your mouth, you tend to be very aware of them. And the tip of your tongue can get irritated for the first couple weeks. But then it builds up a little extra layer of skin there and it’s not as sensitive,” he says.

Also important is brushing really well, because of course it’s easier for food to get caught in the braces, and it keeps gums healthy.

As for cost, the price tag will vary on the amount of time the braces have to be on, and whether it’s on one set (upper or lower) or both. It’s usually in the range of $3,000-$6,000, and sometimes adult braces are partially covered by insurance, depending on the plan.

Patients also will have to wear a retainer after the braces come off, but Sanford says that’s something everyone should consider, given that teeth move as we age. “It’s just part of the bone change and aging process.”

Sanford is known for baking cakes for his patients on the day they get their braces removed. The same is true for his adult patients.

“Of course, they do. They enjoy them more than the kids sometimes. In the long run we all like to get in touch with our inner child,” he laughs. “I enjoy treating the adults because they really appreciate the outcome. I mean they really love it. It makes me happy, and they’re happy. Not that I don’t love the kids, I do. But the adults really appreciate it.”

I guess you can include me in that group. An adult getting in touch with my inner teen, and appreciating the experience like an adult.

Dr. Gregory Sanford’s office is located at 44 Old Ridgefield Rd., above Pinocchio Pizza in the Piersall Building. He can be reached at 203.762.2322.