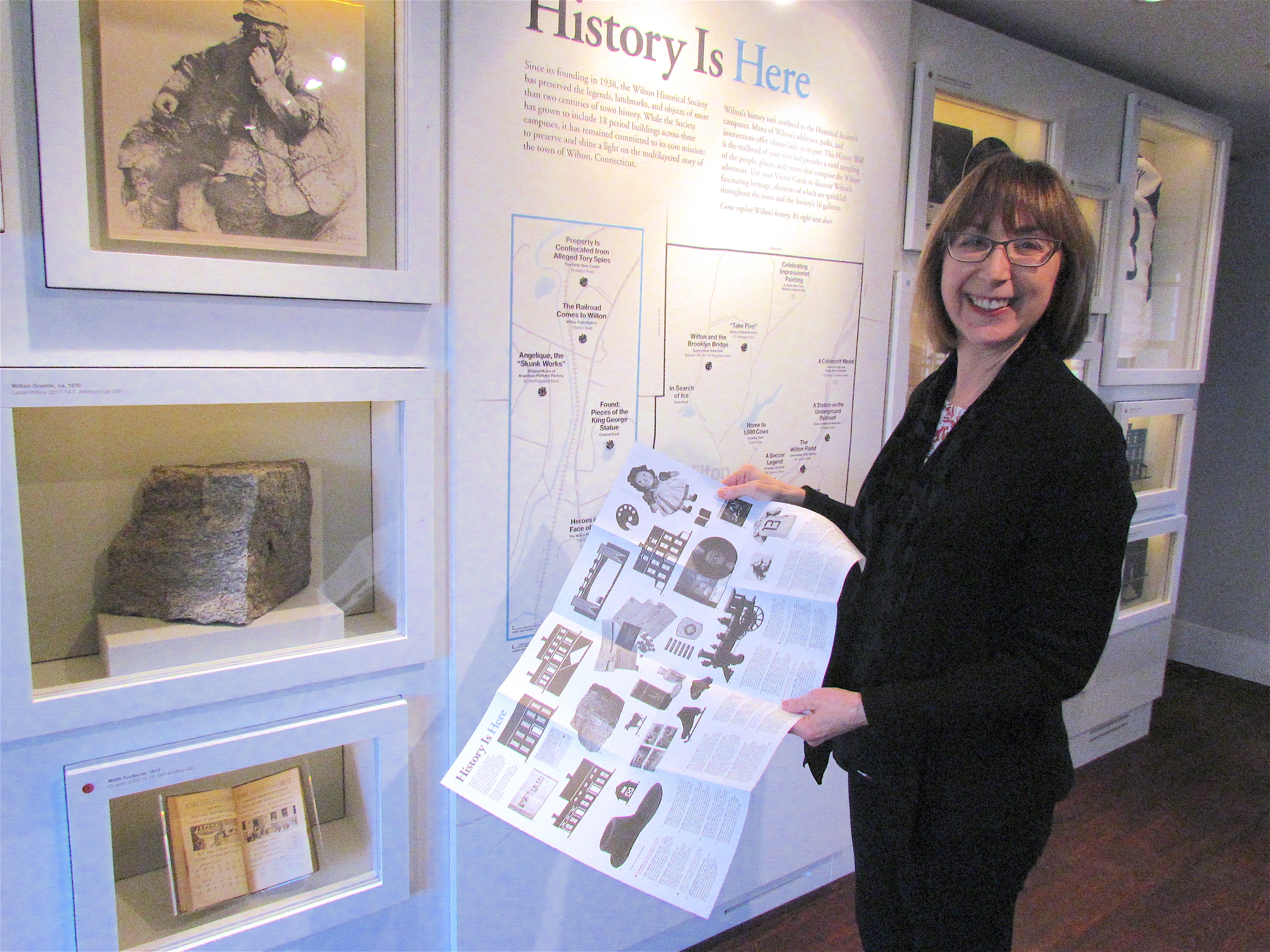 The Wilton Historical Society has a stunning new, permanent exhibit that tells Wilton’s history–and will literally and figuratively put Wilton on the map.

Connecticut’s History, Wilton’s Story, an exhibition rich in artifacts, objects, and an interactive map, will open with a reception for the public on Saturday, April 21 from 4-6 p.m. at the Wilton Historical Society. The new installation is located in the foyer of the 1740 Betts House at the Society’s museum complex at 224 Danbury Road (Route 7) and shows Wilton’s evolution from pre-Colonial times to a small New England agricultural village to today’s suburban town.

GOOD Morning Wilton got a sneak peek at the exhibit and was blown away by both the look and feel of the exhibit, as well as the information it presents. It transforms the experience of visiting the Historical Society, signaling to visitors that the facility is not “just” like other quaint, historical house sites. Instead it elevates the museum complex right from the start, telling a compelling story about Wilton in the context of the wider world. With an interactive map as the centerpiece, it helps visitors get a sense of where important events happened and the impact they had beyond Wilton’s borders.

“This is a first for Wilton – a museum exhibit that traces the history and cultural dimensions of Wilton, and gives context for the Society’s historic buildings and collections,” says Historical Society co-director Allison Gray Sanders, who has been working on the project since its start.

“The exhibit was designed both to present the town’s history, and to act as a jumping off point for visitors to explore other sites in Wilton, such as Weir Farm, Quarry Head State Park, and Ambler Farm,” she said. The exhibition even provides a map of Wilton marked with historic highlights to show “History is Here,” a theme of the exhibition. The map appears not only on the exhibit itself, but also on the take-away museum guide.

Connecticut’s History, Wilton’s Story presents carefully selected objects from the permanent collection and a number of distinctive silhouette pieces. These are interpreted by theme:  Origins, Local Policy, Global Context, Transportation and Legends. A large map of Wilton, central to the exhibition, shows connections between objects, stories and places – “History is Here” is the message of the installation. And it is interactive, allowing visitors to actively engage with learning. An Ives model train from 1884 leads to learning about railroad coming to Wilton, while a chunk of granite tells a little known bit of history about the old quarry on Ridgefield Road – which you can visit and hike. The wandering Old Leatherman, a sensational murder at Lambert House, and an unrealized plan to have a farm with 1,000 cows on Turner Ridge are some of the little-known aspects of the town.

“People respond to history presented in a way that is engaging and memorable – in stories,” comments Sanders.

Major funding for the “Connecticut’s History, Wilton’s Story” exhibit,  has been provided by the Connecticut Department of Economic and Community Development’s “Good to Great” program. In 2015 the Society applied for a state “Good to Great” grant, and in 2016 was awarded $125,000, that with the required 25% ($31,250) matching grant provided by a generous supporter of the project, allowed the exhibit to be created.

The pilot grant program was started to fund improvements that significantly enhance cultural and historic sites and the way people enjoy them. Specifically, the program targets smaller and mid-sized cultural organizations that have received limited state funding in the past. The grants ranged from $50,000 to $125,000, and could be used for a variety of activities including construction, exhibit designing and installation, planning and marketing. The Wilton Historical Society grant was one of 20 nonprofit grants totaling nearly $2 million that was first announced by the state Department of Economic and Community Development in September 2015.

After an RFP process, the exhibition design firm of Ralph Applebaum Associates (RAA) was selected to create the installation. Their work on the Thomas Edison National Historic Park in West Orange, NJ resonated with some of the issues facing the Society’s project, such as working in a small historic space, rather than the typical large, contemporary rooms. RAA is a multidisciplinary firm specializing in the planning and design of museums, exhibits, educational environments and visitor attractions. A family-owned company founded in 1978, its portfolio includes many of the world’s most recognizable public learning institutions across 700 completed commissions in more than 50 countries. Headquartered in New York, with branch offices in London, Moscow, Berlin, Beijing and Dubai, RAA has a staff of over two hundred practitioners including designers, architects, historians, educators, media specialists, technologists, and researchers. RAA is known for its work for national governments, leading institutions, and major corporations.

Founded in 1938, the Society owns and maintains a total of 18 historic structures on three campuses in Wilton.  Most of these 18th and 19th century buildings were saved through “adaptive reuse” – the Society rents out most of the renovated structures for income, while also maintaining a museum complex consisting of two 18th century houses connected by a barn frame gallery space, a 19th century barn and working blacksmith shop, a Colonial herb garden and the Betts Store Museum Shop.