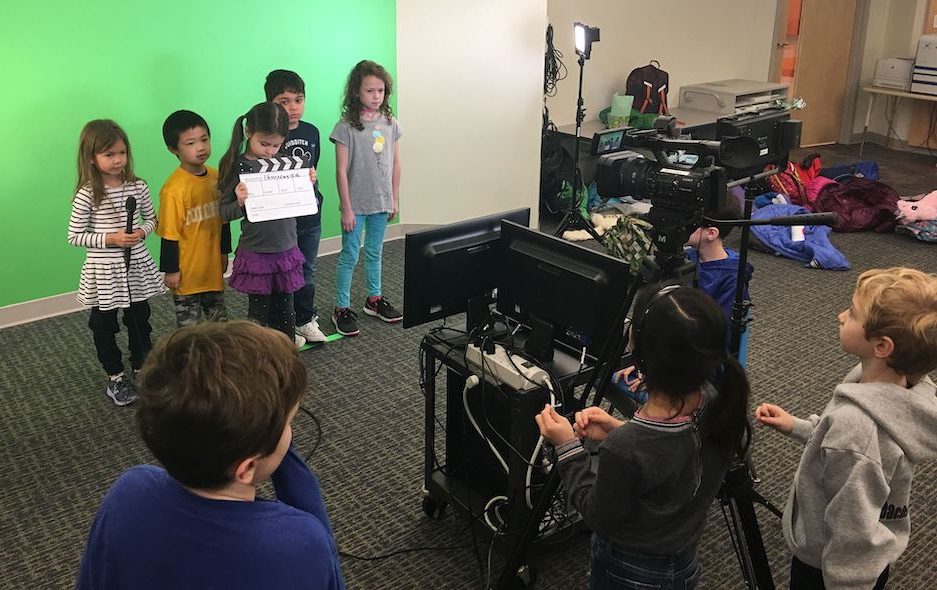 Move over Savannah Guthrie. Step aside, Kelly and Ryan. The next generation of morning television is what it’s all about. And when we say, ‘next generation,’ we really mean the literal next generation. Because the success-on-the-A.M.-airwaves that we’re talking about is the “Miller-Driscoll Morning Show,” which is airing its 500th show today.

The daily morning program is an effort that is shot, produced and starring kids in K-2 from Miller-Driscoll Elementary School. That’s right, almost everyone on this cast and crew is younger than 8-years-old.

“All the adults do is basically unlock the room, are there for questions, and occasionally say, let’s try that one again,” says Skip Ploss, the M-D/district webmaster who is the co-advisor for the M-D Television Club. He and fellow co-advisor, teacher Bryan Ennis (who is also the M-D technology instructional leader), split script writing and editing duties, but everything else is accomplished by the kids. Not only that, they shoot a week’s worth of shows in just the one-hour-per-week, before-school meeting of the club.

The amount of learning that the participating students do is incredible. Some of the children have participated in both the before-school club and the after-school Wilton Continuing Education class, “On Air!” so they’ve become very capable. It’s a testament to letting the kids learn and do and run with it.

“We have two crews of ten kids, with some kids on-air, and the other kids doing everything technical-camera, sound, teleprompter. There’s one guy, I can say, ‘You know where the camera cards are, in my briefcase, go get them and get the cameras carded up.’ He’s in second grade–he’ll get the cameras all set up and loaded, he does it all by himself. Some kids are really into the sound thing. They’ll get all the cables, making sure all the lights are on,” Ploss explains.  “We don’t dumb anything down for them.”

It also fits with the teaching model at work in the schools now. “It’s not, ‘Do it this way,’ but ‘How do you think you need to do this? And if you don’t know, ask someone who might know.’ It empowers them to take charge of it,” explains Ploss.

Everyone gets to be on air, and everyone rotates through each of the roles behind camera as well. It’s been a transformative experience for some of the kids who take part in the club, especially with students in different grades working side by side.

“They’re very supportive of each other. We have it arranged at the desk so there’s an older student next to a younger student. It gives them ownership and allows them to step up and not be afraid. You see kids walk in at the beginning timid and quiet, walk out as rock stars. They gain confidence, they gain friendships. They gain knowledge that they’re doing something pretty cool.”

The show has had an impact not just on the kids who take part but also on the entire school.

“The reaction of the student population to them, and also their reaction to each other, has been amazing to watch. It’s brought community to the school, and kind of unifies the grades a little bit. It’s like the theater program at the high school, with the different grades together,” Ploss suggests.

It can have a fun impact too.

“One of the second graders said one time, ‘I was walking in the hallway and a kindergartner stopped me and wanted my autograph,'” Ploss recounts with a laugh.

Hitting 500 episodes is a remarkable accomplishment. “We do 181 shows a year. I tell the kids, ‘That’s a lot, because most of the stuff you watch on television is only 13 episodes a year. You do 181.'”

Over the four seasons the show has been on air, the advisors have been able to upgrade much of what’s needed for producing a daily show. They used to use GoPros for cameras, and now have

Ploss is grateful for what it took to give the school this opportunity, and he has thanks for several people and groups who helped MDTV get to 500.

“First of all, [Superintendent] Kevin Smith. It was his vision. Bernadette Hess, who was the interim principal when it started, found a space and championed this, and really got it going. And the administration in my building now is just a phenomenal support of it. And then Wilton Education Foundation, the PTA and Wilton Continuing Education have provided all of the equipment, so it’s not coming out of the budget, it’s been all donated. Fran Kompar, the district technology director, who’s been very supportive of us. And of course, my sidekick, Bryan Ennis, who I couldn’t do it without.

The show has won three awards already from the Area 9 Cable Council, the citizens advisory group which promotes education and government programming on cable. The council had to create an award category because no other K-2 news program existed–no other school is doing what M-D is doing at this grade level. The kids also compete against 3rd through 5th graders in other categories.

We could go on and keep telling you all about the show, but what will really do it justice is to let the show speak for itself. Below is the 500th episode, with the incredible MDTV cast and crew–plus some VERY special guests congratulating the team on its milestone. Congratulations, and take it away, MDTV!