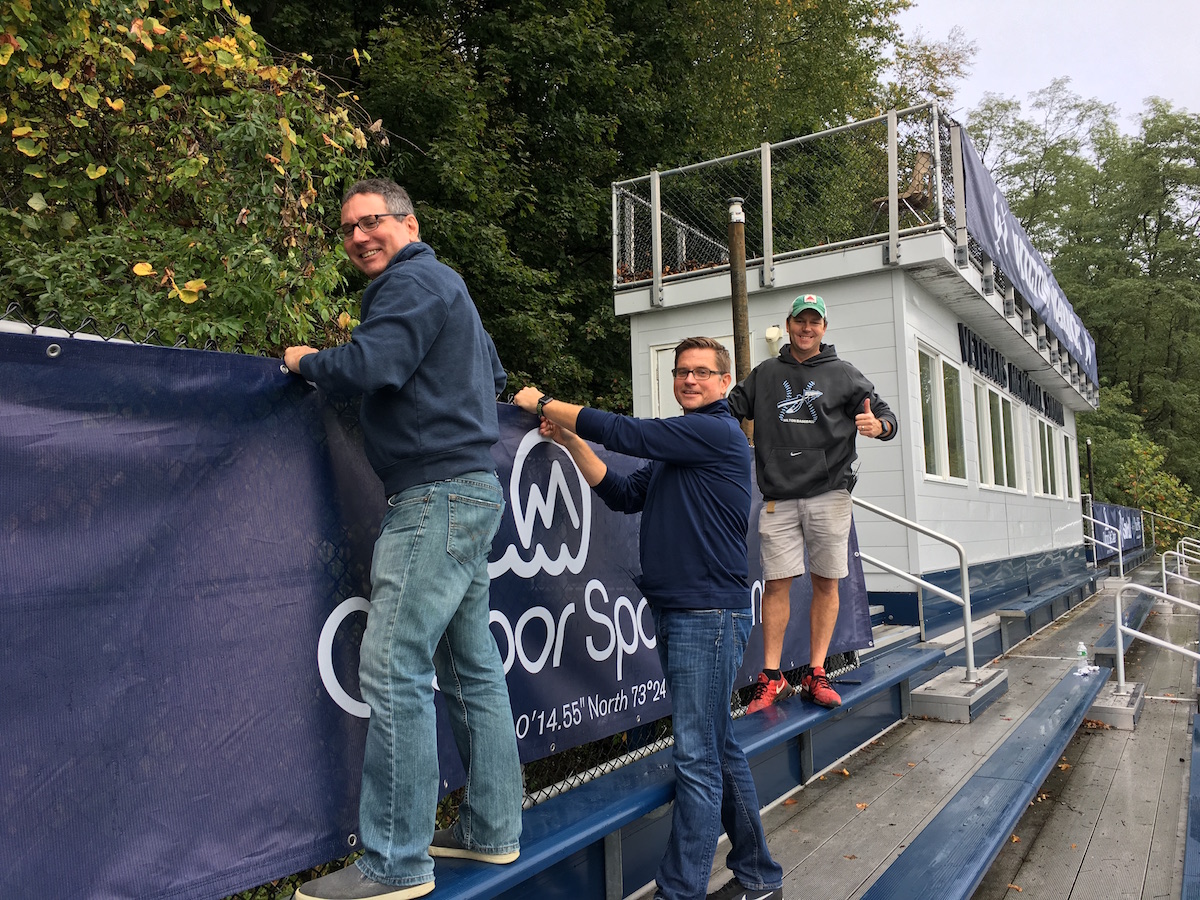 There’s nothing subliminal about the new advertising unveiled this past weekend around Fujitani Field at Veterans Memorial Stadium and at Lilly Field. The navy blue and white signs that now ring the two Wilton High School athletic fields clearly show off Wilton spirit while doing double duty promoting each of the advertisers. What’s more, they also signal that the effort to begin raising the funds to maintain the athletic playing fields themselves is on solid footing–and on track to potentially earn up to $50,000 in its first year.

The ads are part of a pilot advertising program initiated by Board of Selectmen member Dave Clune, who–along with Wilton residents David Cote and J.R. Sherman–has overseen the creation of a foundation to accept sponsorship money to finance (wholly or in part) the future maintenance and replacement costs of Wilton’s turf fields. They are in the final stages of establishing the Wilton Athletic and Recreation Foundation (WARF) as a 501(c)(3) entity so that the sponsorships can be considered tax deductible donations. In only the first few weeks, the program is clearly very successful. Several prominent Wilton businesses jumped at the opportunity to become inaugural sponsors, including lead sponsors Blue Buffalo, Bankwell and Outdoor Sports Center. [Editor’s note:  GOOD Morning Wilton is also a stadium ad sponsor.] Sponsors were offered ads that would run in both the fall and spring sports seasons; the ads ranged in cost from $750 to $15,000; size and location placement varied based on participation level.

“We were very encouraged by the response from sponsors,” says Clune, who adds that there are 13 sponsors in all, plus four others who have helped out with in-kind support. “For this year’s pilot program we limited the number of spots available and filled them in about a week and a half. If this year goes well, we hope the current sponsors see value in participating and will continue in future years and that others will join as more spots become available.”

Blue Buffalo was one of the first businesses to express interest in taking part in the stadium advertising campaign, reaching out to Sherman immediately after the program was announced to ask about being the title sponsor. As a Wilton-based company that was started by the Bishops, a family that’s lived in town for many years, Blue Buffalo was a natural fit.

“I’ve known the Bishop family since the mid-70s, and I played lacrosse with Billy all the way through high school. In fact, Bill Sr. was our coach in the early years,” says Sherman, himself a Wilton native. “As long as I can remember, the Bishops have been strong supporters of the Wilton athletic programs. The Blue Buffalo Company carries on their commitment. To me it’s one of the greatest qualities of a true Wilton Warrior–commitment to helping the program they’re proud of continue to grow and succeed. We’re lucky to have them as a part of Wilton, and of course as a part of our athletic programs and facility investments.”

Now that they’ve started installing the banners around the stadium, everyone involved is very pleased with how the ads look in real life.

“We wanted it to be very tasteful and Wilton specific. It’s a nice balance with letting advertisers get their names and logos out there, so that the advertising is visible but doesn’t overtake the activities in the stadium or the field,” says Clune.