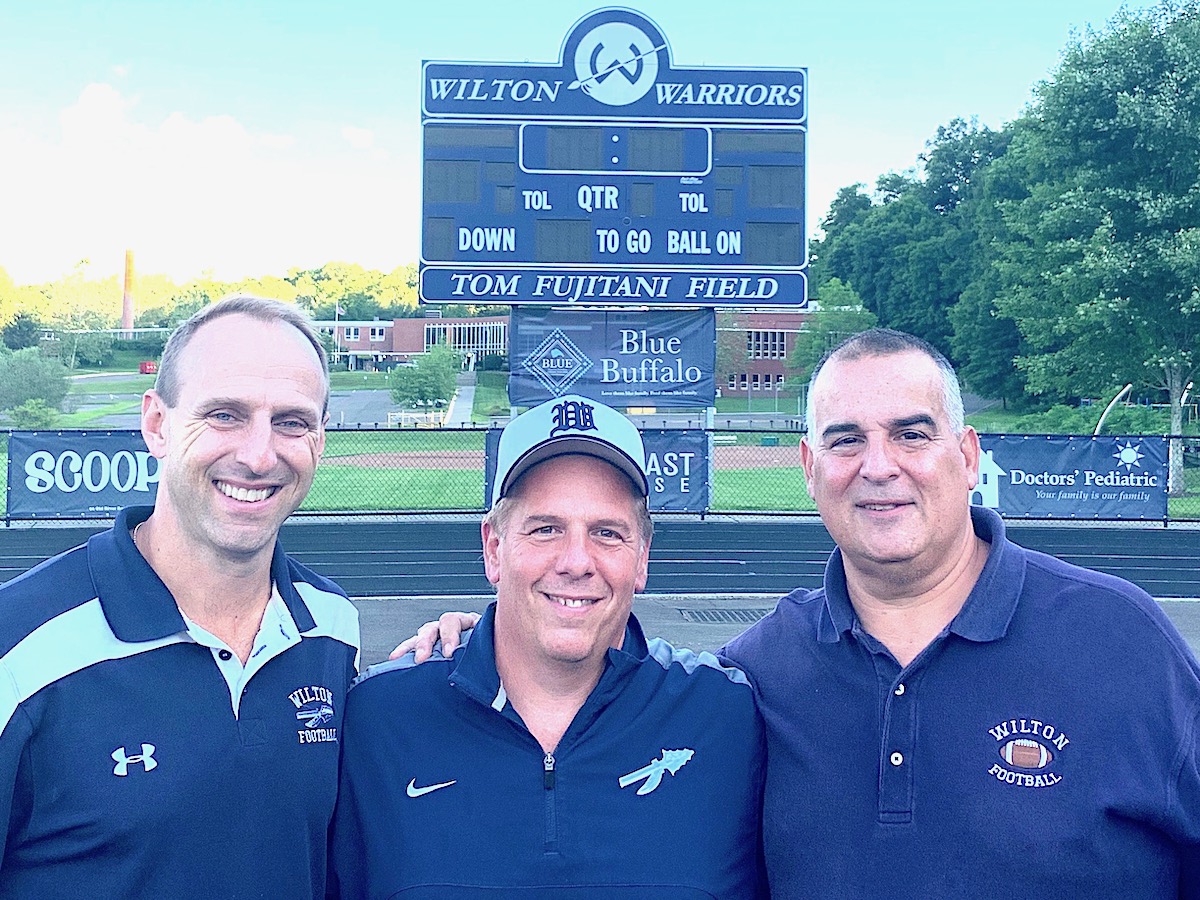 Artie DiRocco has a tough job ahead of him. As president of the new Wilton Warrior Gridiron Club, the new booster club for Wilton High School‘s football program, he has to put some distance between his new organization and the old booster club.

Wilton Police are currently conducting an investigation into money that disappeared from the previous organization, and no one will say on the record how much is missing or who is responsible–and all anyone will say off the record is that it’s a ‘significant’ amount, and people are very unhappy.

DiRocco is eager for Wilton’s football families, fans and friends to know this new organization is very different than the last. Building new trust is especially important as the team’s season is less than two months away from starting and he needs to get fundraising going–and fast.

“We have to get it right and we have the opportunity to start over and get it right this time, and that’s really what the main goal is,” he says, acknowledging that some people are afraid to trust his boosters. “We’re seeing that already, and that’s a big issue for us to battle and we think that the best we can do for now is transparency, complete transparency.”

Fundraising is important, because ultimately the money raised by the boosters supports player safety, first and foremost, says DiRocco. For instance, a new helmet costs $500. In a year where new helmets are needed, for a roster of potentially 90 kids, that’s a hefty bill to foot for the school, so the boosters make sure that all players will get the new helmets, not just some.

“Football is not a cheap sport. Particularly, in this day of concussion awareness where the latest state-of-the-art helmets are mandatory if you want your kid to be safe, which is what we all want,” DiRocco explains. “The school is covering a lot of it, but we’re here to help do that because if they say, ‘We’re going to buy 40 helmets, and they’re going to the kids that play the most,’ well, that doesn’t really feel good as a parent. I wouldn’t want to look at the sideline and see my kid with a different helmet than somebody else, and then see him go in the game and have my heart in my throat.”

It’s also about being competitive, in the FCIAC, which is possibly the most competitive conference in the state.  DiRocco says booster support can make a huge difference.

“Darien and Staples and New Canaan–look at their training program, their off season programs and the attention and strength training compared to what Wilton’s done in the past; it’s easy to see their growth compared to the stalling of the Wilton program. If you look at success in football, it is cut across economics–wealthier towns have better football programs. Last year, the top programs were Greenwich, Darien, and New Canaan. Saint Joe’s, which is a private school and gets private donations and has an endowment, they’re successful too. There is a direct correlation in the success of a program to how it is funded.”

That’s where boosters come in, to help provide that funding.

“The amount of training that Wilton does compared to other towns is really not that high, and our off season programs and conditioning and things are not what they are in other towns, and we’d like to start to compete with those towns. And in order to do that, there are clinics, and camps, and strength and conditioning programs, and strength evaluations, and things along that line.”

Other things DiRocco says his new boosters organization wants to cover include player access to online game films–something players had to pay for out of pocket before–and a new, video and digital playbook, which he says is a great tool to help players better learn the plays.

“Kids learn differently and play differently, and that could potentially make a kid who wouldn’t step on the field a football player. Kids being stronger and faster and better and quicker, with better equipment helps them stay safer. So it’s not just about being in the best helmet ever. It’s about being in the proper condition, being trained properly and actually knowing the program, knowing the play and knowing where to be. And that’s how you stay protected on a football field.”

So how do you ask for money when people might have lost money with your predecessor? DiRocco admits that it’s a challenge, but he’s trying to do it through showing the new organization is completely open, trustworthy and transparent:  “Transparent about where we raise our money, how we raise our money, and what we’re spending our money on.”

“Every month we’re going to have our treasurer prepare monthly financials, and our vice president is going to get those financials and bank statements and he’s going to make sure they tie every month. And on a monthly basis, those are going to be presented to the booster board for acceptance,” DiRocco vows.

What’s more, DiRocco not only was not a member of the prior booster organization, he also brings with him a track record of trusted board experience managing a non-profit. He stepped down after many years as president of Trackside Teen Center to lead the Warrior Gridiron Club.

“I’ve done this before, yes. I think that’s why originally they reached out to me. And there are some nuances to running nonprofits, particularly in the state of Connecticut,” he explains.

Running a non-profit involves fundraising, and DiRocco says the new club has gotten creative with how it’s hoping to raise money. Organizers have created new donation levels, ranging from $25-$1,500, with benefits like more access, season tickets and premium parking for higher level donors.

“Being in the locker room before games for pregame speeches, access to the press box. We’re working on buying a couple more headsets, so you can listen to the coaches during the game. We’re offering parking spaces up by the concession stand, so you don’t have to walk up the hill in the dark. It’s being more generous, or as generous as we can, with tickets to the games. Instead of giving away one or two, we have whole families,” DiRocco says.

While a booster club usually looks to parents as the primary source of funding, the new football boosters are hoping to encourage alumni to be more involved as well.

“The alumni have been long overlooked as part of the football program in Wilton. They sit in the stands feeling like they’re not part of a program they built. This is the 30th anniversary of the last FCIAC championship for Wilton. We’ve been in touch with some of the key players of that grade, and we’re going to do some things that I don’t want to disclose yet to honor them this year. And football is more of a family than a sport. And part of that family is the history, and we really want to bring back some of the rich history of Wilton football,” DiRocco says, adding, “Listen, if we get money out of the alumni that’s gravy to us, that’s wonderful. We want them to help the program and be part of it. We’re going for the history–if we get more out of it, that’s wonderful.”

The Gridiron Club has a major fundraising event, a golf outing planned for Aug. 22 at Sterling Farms–which could get complicated. The old booster organization had to cancel its own golf outing that had been planned for earlier this month when its money disappeared–money that people had given to register for that event.

DiRocco knows that many people feel burned, and even though he reminds everyone that the new club is a separate and different organization, he’s still going to make sure that anyone who had paid to take part in the old club’s outing won’t have to pay to play in the new club’s event. It will be hard, because he has no access to records or financials from the old organization. [Editor’s note:  Police have offered no comment on whether financial records have been turned over or what they have learned, citing an “ongoing investigation.”]

“We believe there are individuals who have registered for golf, and even booster membership with the previous booster board. We don’t know who those people are. We would actually need those people to contact us. They can do it through the website. They can contact me directly. We will honor. People are not going to lose money. We’re not going to ask people to pay for their booster fees twice. We’re not going to ask people to pay for golf outing twice. It’s just not going happen. We’re going to honor it. But, in honoring that, we hope people understand that we’re incurring debt. We’re starting at zero,” he says.

But he adds, it’s the principle.

“We’re hoping for a big turnout. It is our single biggest fundraiser of the year, and we understand there’s some people registered for another golf outing. We’re going to, again they’ll be honored. The golf outing is important on a lot of levels, not just as a fundraiser. It’s really a time when the parents get together.”

All in all, DiRocco hopes that people see the new club in a new light, and consider the Gridiron Club a fresh start.

“We think that the Boosters are pretty well situated to start over again, and start to focus our attention to the right places, and that’s really what our main goal is. It’s around safety, it’s around experience around the experience around football.”