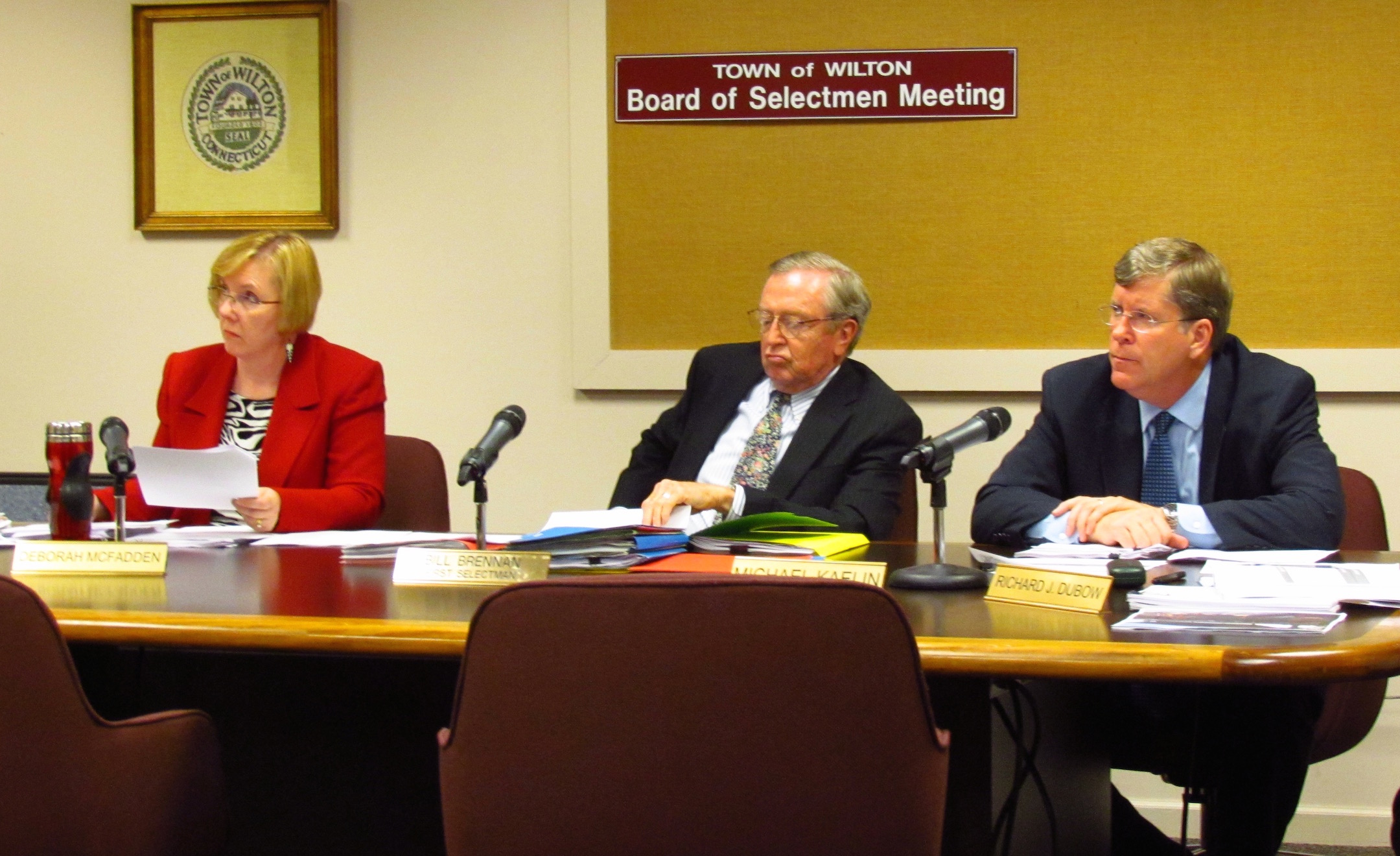 At last night’s (Tuesday, Sept 8) Board of Selectmen’s meeting, the board discussed several items. Among them:

At last night’s meeting, the board brought up a topic it has discussed previously:  the turf field project that is currently being proposed by Wilton Youth Football and other youth sports organizations in town. The plan is one that involves private-public partnership, with the sports organizations privately raising funds to build the field on land the town owns at Middlebrook.

The plan has gone through several iterations over the last few years, and has hit hurdles when a handful of residents objected to the project, despite support from the town’s major governing boards. As of November of last year, the board of selectmen approved the sports groups to move forward and pursue getting approval for the project from various land use commissions in town in the form of special permits.

However, as it was discussed at the Nov. 17, 2014 BoS meeting, the emphasis was on the proposal going in front of the town’s Inland Wetlands Commission.

“When we discussed the sequencing on the 17th of Nov., we were going to Wetlands first, which we did and we received a permit; then we were going to go to Planning & Zoning, which we’ve now done. Because of the sequencing discussion, the resolution talked about Wetlands approval and inadvertently skipped P&Z,”  J. Casey Healy, the attorney representing Wilton Youth Football, explained.

Per a request from Healy, first selectman Bill Brennan last night clarified and refined the BoS position from that Nov, 2014 meeting to include all Wilton land use boards:

“My recollection was when we met in November was that we were not approving the project, what we were doing was authorizing Wilton Youth Football to go forward and to get the necessary land use permits–as any project has to go through the various boards and commissions–and that’s what we were doing. Casey was saying we need to clarify because the way the letter [from the BoS] was written, it was somewhat specific to the one land use board; we wanted to include P&Z,” Brennan explained.

As such, last night the BoS reiterated its support and authorized Wilton Youth Football to seek all required land use approvals for the renovation of the Middlebrook School Field, on behalf of the town of Wilton, as owners of the land. After Deborah McFadden made the motion to give that authorization, Michael Kaelin seconded it, and it passed the board unanimously.

Healy explained that whatever lighting is involved in the plan has to be reviewed by the Planning & Zoning commission, and such an authorization would not mean an endorsement.

The first work will start on the driveways from CVS, the Town Green and Bank of America, where they meet Old Ridgefield Rd..

Brennan noted that work will focus on removing the deteriorated concrete in those driveway areas and then on pulling up the crumbling sidewalk sections between the Library and Caldwell Banker. Additional sections will be graded and bricks will be added between the sidewalks and the concrete curbing that was installed two years ago. Street paving from Wilton Hardware through the rest of Wilton Center won’t be started until the sidewalk work is completed, Brennan said, which he says is targeted for “before the winter season.”

“We’re pushing hard to get this done so that we have the town back to what I can say is normal. We’re asking for patience because there will be some areas you’ll just have to be mindful of. We’re asking citizens to recognize we have to do these things in a sequence, and we’ll repave the road. It’s coming along, I’m pleased,” Brennan added.

Following a day where temperatures hit in the high 80s, Brennan noted that there’s been very little rainfall lately.

“The town is requesting all citizens to voluntarily conserve water. Please avoid unnecessary running of water, such things as letting water run when doing dishes, brushing teeth, lawn watering and such,” Brennan said at the meeting. With current water levels approaching drought levels, he cautions that wells may dry up.

“It’s in all our interests to conserve water now. It’s timely to start voluntarily conserving water in any way possible,” he added, noting that it applies to everyone–residents on city water as well as well water.