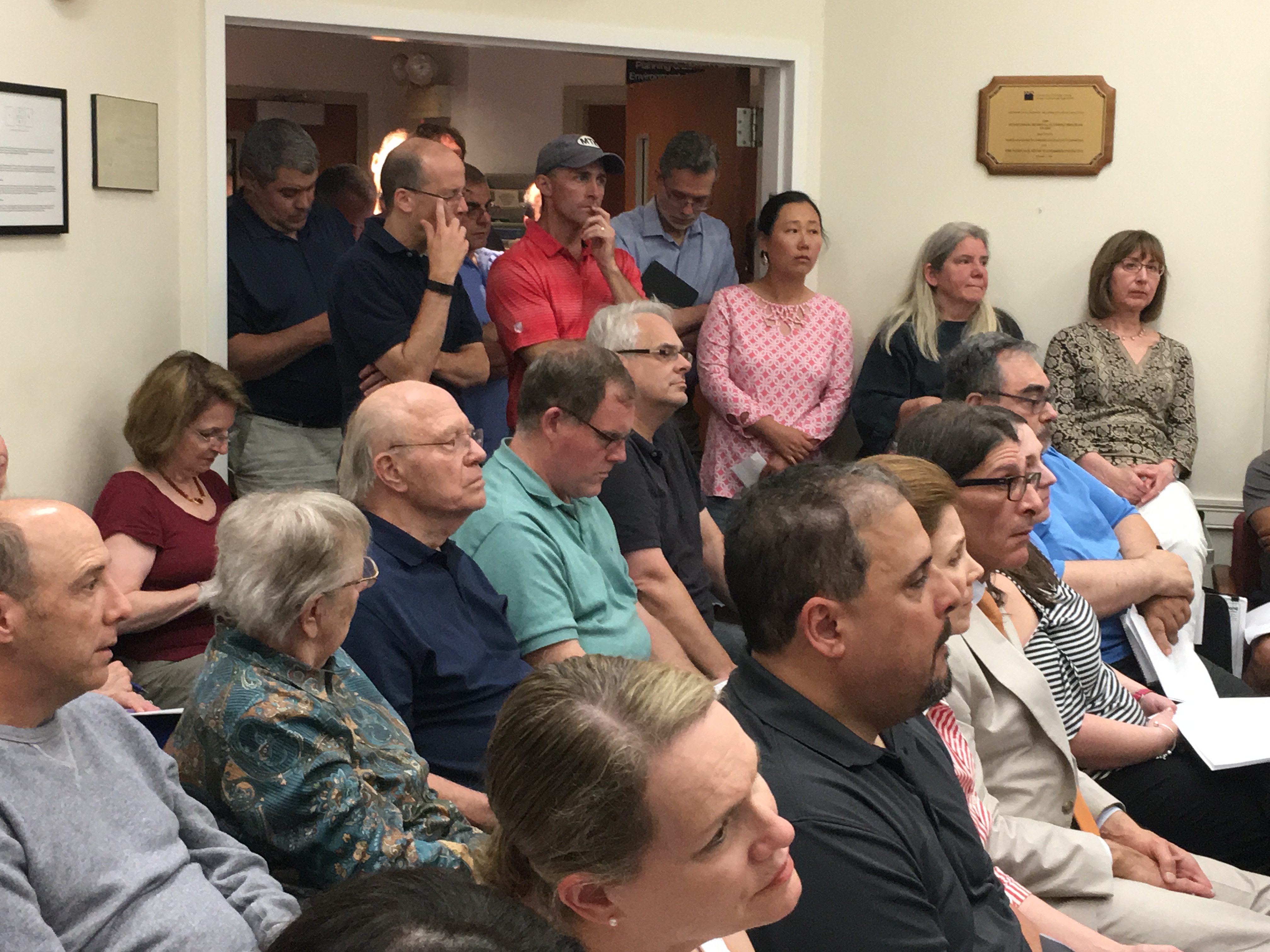 There weren’t enough seats to fit the 60-70 people who showed up to last night’s meeting of the Planning and Zoning Commission. In fact, there almost wasn’t enough floor space, where many of them were sitting, crowded into the room and spilling into the hallway for the public hearing on the first two applications on the Wilton Heights project in front of P&Z.

The project is being proposed for the property at 300 Danbury Rd. as well as seven acres on Whitewood Ln. where there are currently three single family homes. As described by the developer, Wilton Heights will be a mixed use retail/commercial and residential property, with space for up to 10 retailers and 74 apartments. It represents more than just what it seems on the surface, however.

For people in favor of the project, it’s the make-or-break venture that will either usher in a new era of lower property taxes and a revitalized Wilton Center, or signal to developers that Wilton is not the place for them or their larger projects. For people against the project, it represents encroachment on neighbors and open space, a threat to the surrounding wildlife and wetlands, and something that runs counter to the historic charm and rural nature of the town itself. For both sides, there’s a shared basis for their side of the argument–whether or not the current Plan of Conservation and Development (POCD) Supports what is proposed.

Last night’s hearing wasn’t even about the project’s specific design, site plan or land use–that special permit application will have its own public hearing and consideration beginning July 9. Instead, what was before the commission at this meeting were two applications regarding the zoning regulations in place for the parcels. According to the developer, Wilton Heights LLC, moving forward on the project is contingent two things:  a zoning change for a portion of the property from residential one-acre (R1A) to Wilton Center Development (WC) zoning; and amending the text of one regulation pertaining to Area and Bulk requirements to allow the project to exceed current height and setback restrictions in the WC zone.

Gregory and Adams attorney Casey Healy made the argument on behalf of Wilton Heights, LLC to change the zone for Whitewood Ln. from R1A to WC (Whitewood Ln.). Presenting on the text amendment changes was Craig Flaherty, the president of Redniss & Mead, a planning and land consultant, on behalf of the property’s current owners, JFM Properties LLC and MWD LLC.

Healy argued that with Whitewood Ln. being surrounded by properties zoned for multifamily and commercial uses, that the seven acres should also be zoned for commercial. Changing the zone, he said, “would allow additional business as well as provide housing opportunities to benefit all businesses.”

Flaherty presented case for amending the area and bulk text with a grander explanation that he said was “the core idea”–the Wilton Heights development would anchor a “very important intersection,” within 1,000 ft. of the Wilton train station, with “the vision… to really try to make the intersection feel like it is a gateway to and an extension of the downtown.”

He noted that the developer eventually would be proposing changes to the intersection itself, to shift it from a drive-through area with “a lot of through traffic that has no reason to go to the downtown. Now this intersection reads like a DOT exchange and we want to change that,” with offsite improvements that he said would slow traffic down, greatly enhance the esthetic.

Flaherty also said that by increasing the housing density near transit and within walkable distance to the town, the residential units would apply to younger new residents as well as current Wilton residents who want to downsize. He pointed to similar projects the developer has built in Norwalk with “apartments getting filled up with expats from Wilton.”

One change he was requesting was to increase the height limit for buildings in the WC zone. The Wilton Heights plan calls for a 46-ft. high building; right now the regulation only permits structures that are 42-ft. high. The other main change would be to reduce the property setback from 75 ft. to 25 ft.

Paxton Kinol, the developer, was at the meeting, and he stepped forward to explain why the 46-ft. project height was important. He said that by asking for three and a half stories, Wilton Heights would be able to change attic space into living space, and it would allow the buildings to be, in his view, “much more attractive”–and also more economically viable for the him.

Kinol pointed out that his proposal was for a property that has been for sale for 20 years, with no takers. “We’ve all seen it stay fallow for 20 years because there hasn’t been a zone on the site that’s economically viable. We now have an opportunity with some small changes that makes it work. That allows you to mix commercial and residential together. , I think it’s great.  41:30 We think we need three more feet to make that ?? work  We’re not changing 0-46, we’re talking changing 42-46, in my mind it’s small change, but allows attic to be activated.

Among the comments made by commissioners were several that wondered about whether there would be an affordable housing component.

P&Z chairman Scott Lawrence pointed out that the Wilton Center zone does not have an affordability component, but with 74 units on seven acres the commission might want to make it part of the overall discussion on how Wilton can comply with 8-30g, the state’s law mandating affordable housing.

“We have to deal with 8-30g, and how we address it. Rt. 7 has been pointed as one of the locations to address it. We should have that discussion. What affordability  components can we work on? What can we do here? That will apply to all of Wilton Center, and that’s a big question we’ve started to explore, but we need to talk about it. That’s going to require some thinking,” he said.

Kinol also told the commission that he’s thinking bigger than just he one development. “We have plans from Orem’s diner to the train station… some we’re making as part of this application… I don’t know what’s appropriate to show at this point.”

Commissioner Chris Pagliaro said that advocating for more change to the WC zone and district was something he expected he would want to do when he joined P&Z. He noted he’d like to see a more literal acknowledgement of the project being a gateway:  “I would like to see the design say, ‘gateway’… maybe a tower, maybe something that says, ‘This is a town right here, maybe it becomes a sign… Some of these things are worth discussing and we should take a look at it.” Lawrence opened up public comment by reminding everyone that the hearing would likely be open for several meetings, and that anyone who wanted to be heard would have an opportunity, at some point. He said that comments would be restricted to only three minutes with the aim of ending the meeting before midnight.

Lawrence also noted that the commission also welcomed comments by email and snail mail. “Written correspondence is always great, it gives us time to digest ahead of the hearings. Of course you can show up to speak, we’ll accommodate as much time as we can.”

Of the 17 people who did offer comments, 11 of them were outwardly in favor of the project.

Among them was Tom Fastiggi, who owns a business in Wilton Center. He said the project was “one step of many that needs to be taken. I wanted to address your concern with how this ties into a really big starting point for rejuvenating downtown. It’s a pretty unique opportunity because of the amount of traffic each day that never sees downtown. I would love to hear a plan of development more in the center, but now we have a unique spot with a lot of traffic, really close to downtown. All these people coming down Rt. 7, if they drive by that place for the last 20 years, and never stop in, we have no tax revenue, it’s been a black hole. It’s a unique area to start to tie this into the downtown.”

Realtor Peg Koellmer reflected on her experience being involved with the Wilton Chamber of Commerce, saying, “I feel the pain of the downtown merchants.” She said saw promise in the proposal. “There’s a real possibility to make everyone happy, or at least only a little bit unhappy. Simple things–unique lighting on Rt. 7 and over the bridge. I did a ribbon cutting in Wilton Center with a couple who lived in Weston for 30 years and they said they didn’t know Wilton Center existed. If there is some way we can get something in exchange that would beautify that whole intersection plus draw your eye to the center of town.”

Moses Alexander spoke in support of “a diversity of housing that we need in Wilton” in accordance with the current POCD. “It’s important the town be open to text and zoning changes that make the properties economically viable. What was presented, may not be where we end up but that’s the direction we should be going.”

Raj Wadehra also expressed support for the project, calling the idea of the property as a gateway applicable also for current residents, to encourage them to spend even more time in Wilton, patronizing Wilton businesses and restaurants. “It’s not just the idea of a gateway for people passing, it’s a gateway for us, as residents.”

Jeff Kaplan handed what he said was a petition with 75 signatures from people “fully in support.” He added, “Our taxes are going up, CT is not giving us money, this developer is helping us out. He put a plan together to make it economically profitable and is willing to work with the town to make the town happy. Residents will be happy with what he brings. If we do not actively work to get this done quickly he will walk. If they leave, you’ll have an exodus of developers and then avoidance of this town.”

There were some who spoke against the project. Anthony Boccanfuso called some of the statements from the developer “misrepresentations.” He noted that he lives in the Crown Pond residential development to the immediate southeast of the proposed Wilton Heights project. Boccanfuso objected to the developer’s reference to Crown Pond as “multifamily.” “If they’re wrong about one thing, they’re wrong about other things.  Crown Pond is single family. They are clearly not multifamily. What is the motivation to make misrepresentation?”

Another Crown Pond resident, Raju Kakarlapudi said the idea of such a larger development isn’t suitable for the town. “There’s a reason we come to Wilton, we could have picked Bridgeport, or Danbury. There are other opportunities. Go to the town center, there are multiple things they can do there.”

Alexis Boccanfuso argued that one of the objectives of the POCD is to protect residential neighborhoods, like Crown Pond where she lives. That, she said, is something Wilton Heights wouldn’t do. “There are 26 single family houses on 26 acres of land. It’s not a high density area. Whitewood Ln. is three houses on seven acres. It’s next door to our property, turning it into multi-use commercial and 74 apartments, that’s huge….This would not protect the surrounding neighborhoods. I’m not sure this building is preserving Wilton’s character. Natural spaces, open land, quaintness– I’m not against development, I’m against the change in zone. My house is 200 ft. from 3 Whitewood Ln.. Instead of a single family single story house I’m going to have a 46 ft. building with 74 apartments.”

The hearing was continued and will remain open, allowing more people to comment at the next meeting on Monday, July 9–the same meeting when the next Wilton Heights application (for the special permit) will open for discussion as well.