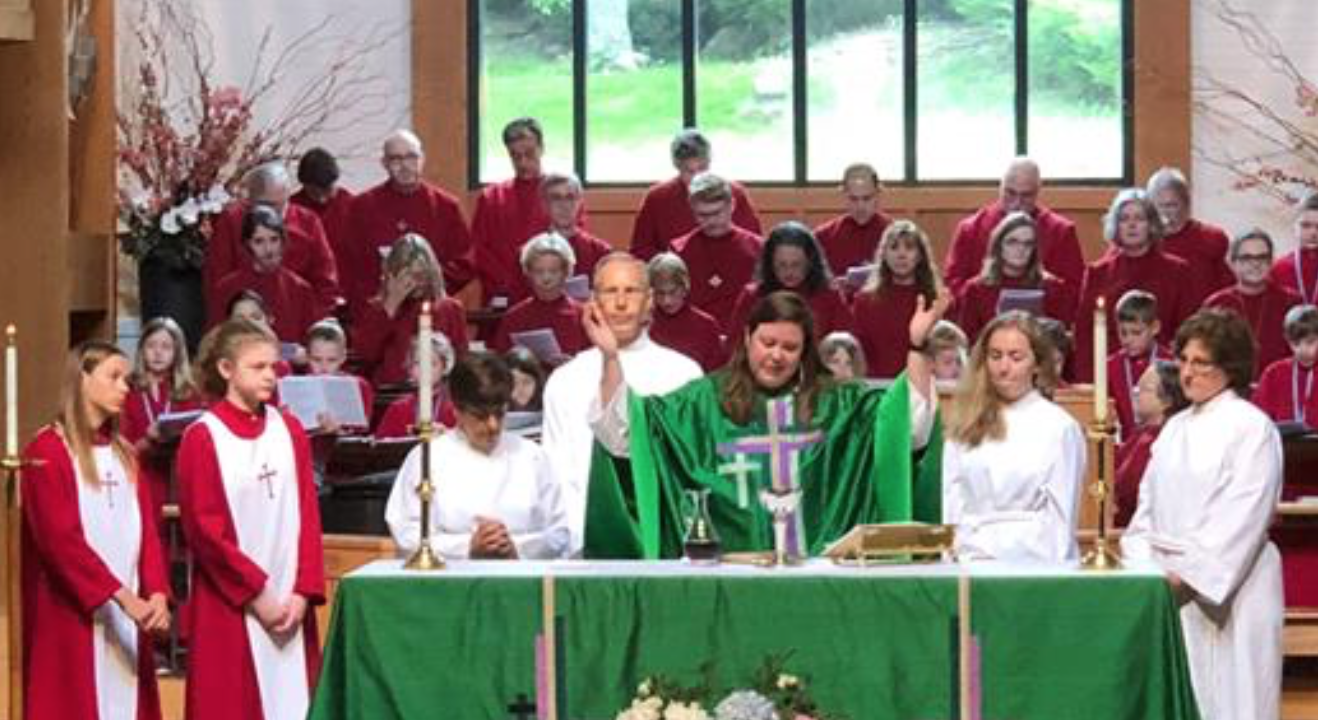 Earlier this month, Rohrbach was officially called to serve as the rector of St. Matthew’s Episcopal Church in Wilton. But in between callings, she traveled a number of unique paths before she decided to go to seminary.

Rohrbach grew up outside of Philadelphia and lived in France for a couple windows of time starting at the age of 15. French also happens to be her first language. She attended an Episcopal school for a majority of her education and went to public school for the last few years. After being recruited by the U.S. Naval Academy for swimming, she considered the military route.

However, “God just wouldn’t let go,” she articulates about her vision of becoming a pastor. Knowing that eventually she would have to go to seminary, she followed advice to study anything she wanted that wasn’t Christianity in college. She attended George Washington University in Washington, D.C. with a major in French Literature and a minor in religion in which she studied Buddhism, Hinduism, and Islam instead of Christianity, “to round out the picture,” she explains.

Rohrbach’s journey led her to Yale Divinity School, where she earned her MDIV (Masters of Divinity), the required degree to be a priest in the Episcopal Church. But Rohrbach was just shy of the minimum age to be ordained in the Episcopal Church–24. So she stayed an additional year at Yale to obtain a Master of Sacred Theology, a thesis degree, until finally reaching ordination age.

Before Rohrbach made her way to St. Matthew’s, she was a rector at St. Andrew’s Episcopal Church in  Meridan, CT for four years and an assistant at Holy Trinity Church on Rittenhouse Square in Philadelphia two years prior to that. Now she resides in Wilton with her wife, Lyn, who works as managing director of a Syndicate of Lloyd’s London, doing risk management for clinical drugs.

Rohrbach can’t help but mention their two beloved pooches, Becket and Micah. In the couple’s free time, they love to travel or cook. “I really, really love to feed people, which translates to what I do here obviously,” she says.

Rohrbach directly answers the one question that sometimes hangs in the air when she meets new people, knowing it’s something that many are curious about.

She calls herself lucky that the Episcopal church addressed the question long ago, in 2003. “The Episcopal church kind of had that battle a while ago. It was really centered around Gene Robinson,” the first priest in an openly gay relationship to be in consecrated as a bishop in a major Christian denomination, a very controversial situation at the time.

“The truth is that who I am in that particular way doesn’t actually change what I do as a priest. My work is my work, it’s to be here, to worship, to care for people and build up a community, and be a voice for justice and mercy in the larger community. The work that I do for Jesus doesn’t change based on that part of my life,” articulates Rohrbach.

The issue that was harder than sexual orientation for people to deal with was, in fact, her youth.

“In the last 10-15 years, we’ve shifted on that dramatically. We ordain a lot more young people now. But at the time, when I presented myself, folks sort of looked at me and were like, ‘Well you have no life experience. How could you possibly do this?’” she recalls. “As you know, as young people we actually do have a decent amount of life experience. We learn many things along the way. So I would say that like most young women, there was a good bit of resistance there too as to whether or not I could do this work.”

According to Rohrbach, the Church needed to reimagine what it looked like to be a young clergy person not just where she was, but on a national scale across denominations. “It is also still true that when people think about pastors and priests, they think about men,” she conveys.

On Rohrbach’s first Sunday preaching at St. Matthew’s, she sported a pair of green, plant-patterned heels to coordinate with the green robe worn after the season of Pentecost symbolizing Epiphany. “I had a couple of people mention how cool my shoes were. Everything else that I wear; the collars, the shirts, even the pants were intended for men. So I was like ‘This is the only way that I get to be a girl, right?’ It’s a silly thing, but as I just said a little bit ago, God created us all in different shapes, and sizes, and genders, and colors, and sexualities. So why can’t those be represented in the image of faithful at the same time? Why can’t we have all of them?” she expresses.

Being a young woman in the profession might have been her biggest hurdle, but Rohrbach also sees that there are many misconceptions about what it is to be Christian, and what it is to be faithful. Walking around in the world in a collar, she says, makes her particular aware of this.

“We’re all so divided at this point, and there’s so much happening, especially now. It’s just that Christianity has been so bifurcated, and cut down, and kind of made into this appropriate little thing that fits in a box that you look at and you’re like, ‘Well I don’t actually have any need for that.’ But at the end of the day, everybody has a need for the living God who actually is in everything, and in you, and just we have to reimagine how that relationship works in a world that is really divided. There actually is a lot to say, we just haven’t said it,” she believes.

The Pull of St. Matthew’s Rohrbach is also a transition consultant offering assistance to congregations in the diocese during periods of clergy/leadership transitions, so she tends to see the profiles of churches when a clergy member leaves. She describes that when she stumbled upon St. Matthew’s profile, “It was totally a Holy Spirit moment. There was a gut feeling of, ‘I think I need to go talk to those people.’”

What resonated for her was the way in which St. Matthew’s told their story about “…wanting to be this really open and accessible community, wanting to be a witness in Wilton for Jesus, what it means to live a faithful, sort of loving life and wanting to sort of do more of that, to figure out how to give back more, how to participate more, how to learn how to be more faithful together,” she says.

Rohrbach is ecstatic about getting to know her new congregation well.

“It’s really not about me. It’s about this community, the community of St. Matthew’s and the Wilton Presbyterian Church, being in the same facility, and the greater Wilton community,” she says, adding, “One of the great gifts of this place really is the people. They are so, so gifted, and so committed to this place and to the work of the gospel. So I’m really looking forward to what’s in store for us, what God’s plans are, and how we’re going to dig into that and unravel it.”