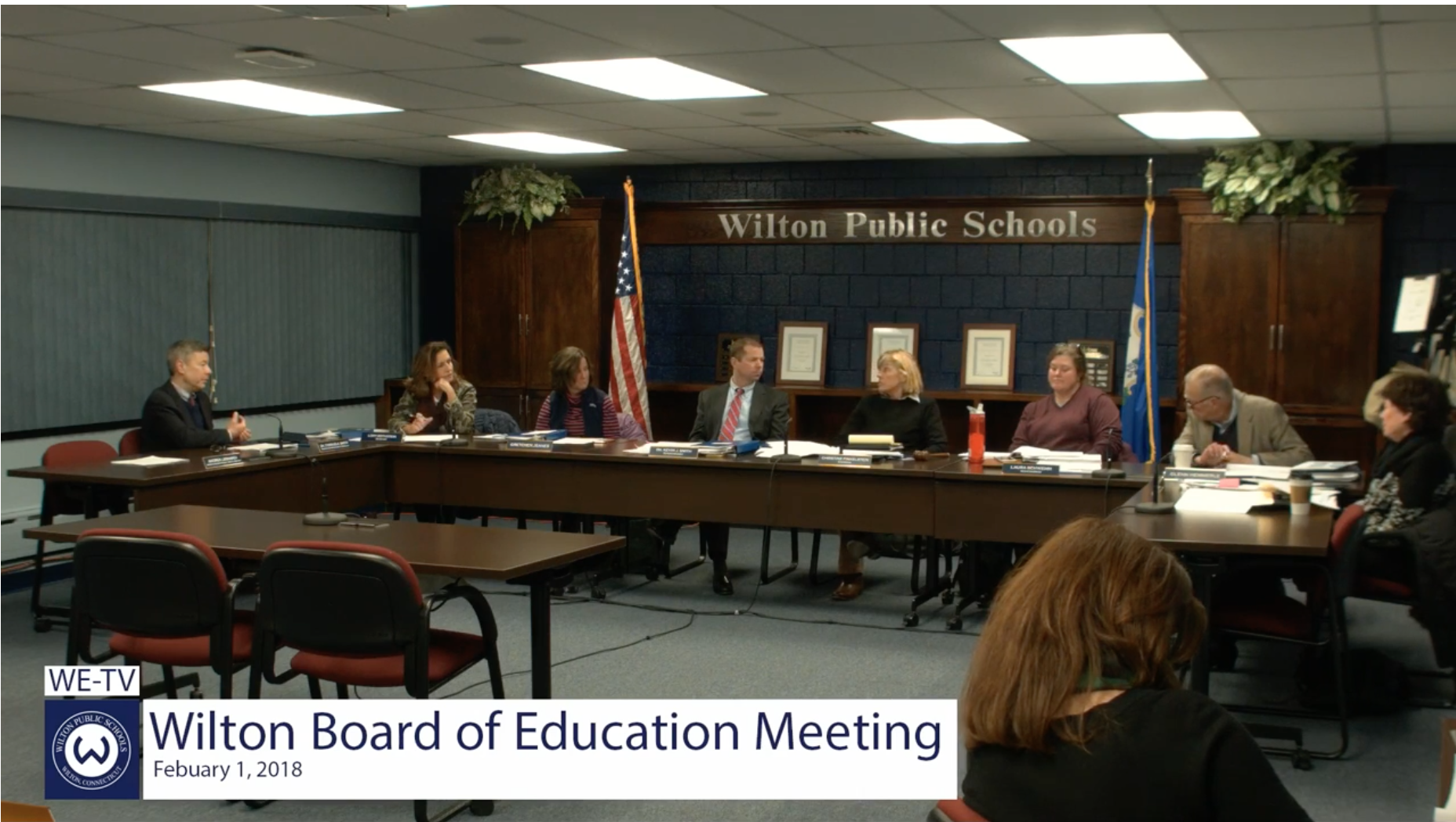 The theme of last night’s Board of Education meeting seemed to be one of worry, at least when it came to discussion of the proposed budget for FY’19. The topic was the only item on the meeting agenda, and several Board members expressed their fear that the budget put together by Superintendent Kevin Smith was too lean, and if it would, as BOE chair Christine Finkelstein characterized it, “leave us vulnerable.”

At $82,164,877, the proposed budget reflects a 1.98% increase over last year’s budget. For perspective, it’s a bigger increase than the 1.0% increase guidance given by the Board of Finance this year; however, it also comes on the heels of last year’s 0.0% budget increase, and very small increases in the prior years as well–something Finkelstein pointed out with serious concern.

“Clearly the 1.0% guidance that we were given by the BOF would do grave harm to our schools. I think there’s just an expectation in our community that we’re going to continue to produce wonderful schools. We’ve been able to somehow do it every year you’ve been superintendent. Last year everyone was so proud that we came in with a 0%, and you were very clear, this funds everything we need. The year before, .77%, we did it that year, and the year before that and before that. This year we can’t do that. It’s a real eye opener to many in the community, that it’s time to put the brakes on, and face reality–that we’re doing harm to our schools, and we have to invest in them. We can feel good that we continue to cut, but the year will come when we have too look at an 8% or 10% increase.”

She added that during the meeting someone had said something that resonated for her:  “They never thought they’d be on a Wilton Board of Education debating social worker and textbooks, one against the other. It’s a sign of where we are.”

There were a handful of cuts the Board members agreed were the most concerning and they asked Smith to come back with adjustments to the budget if those areas were added back in. Those were:

Smith explained the impact each of these areas would have if they were not added back in.

Social Worker:  A proposed reduction from 2017-18 staffing in the 17/18 school year; an “integral part of the team providing social and emotional support to students in both Miller-Driscoll (Prek-2) and Cider Mill, … [where administrators] have witnessed an increase in the numbers of students exhibiting anxiety and stress-related behaviors that impact their academic success. … In the preschool, the school social worker is often one of the first contacts for families of the youngest learners who are newly diagnosed with learning disabilities, As such the social worker provides intense support to families and serves as an important bridge to additional community supports.”

English Language Learner (ELL) teacher:  Answering whether maintaining only one teacher for the 33 current ELL students–more than twice what it was four years ago–would have a ripple effect in later years for higher, long-term SPED costs, Smith said adding a second ELL teacher could only help: “With current staffing there is no available time for the ELL teacher to collaborate with grade-level and content area teachers, making ELL instruction less effective and less informed. There are also fewer opportunities for the ELL teacher to confer with building-level administrators on standardized testing of ELL students…It is certainly likely that ELL students may be referred more often for consideration for special education supports and services.”

Textbooks:  Adding this to the budget would fund digital versions of the Math In Focus texts for Cider Mill and Middlebrook, which “are used extensively at both schools to access all of the support and resources available for the MIF program, including workbooks and extra practice materials. Access to the digital version also allows teachers to create their own classroom materials to reinforce or extend learning for their specific students. MB students in particular have been using the digital version on their Chromebooks.” At the high school, this would fund textbooks in need of updating in several courses. This budget addition would not include updates to Miller-Driscoll or Cider Mill library collections, which are 19-20 years old.

One other program that the current budget doesn’t reflect is a proposal for an alternative high school, ballparked for $500,000. Smith explained that since the Evening School program ended, “we have some kids whose needs are not being met in our current high school program. …we have seen an increasing number of students struggling to succeed, sometimes having difficulty even making it into the building, as a result of anxiety and stressors related to the size of the school, the pace of instruction, and the pressures that accompany our rigorous expectations.”

Outplacement costs sometimes approach $60,000 per student, and by providing an alternative program Smith said many of those students would be able to be served in district–at an estimated $30,000, what Smith called “a substantial reduction.” The program hasn’t been fully presented yet to the Board, something BOE member Debbie Low remarked on.

“It’s a huge expense, very worthwhile, but it’s coming late in the game, I would like more discussion about it, rather than put it in the budget and try to hurry up the rationale…. Having not seen the proposal, I’m not sure of the timing…I understand the need, I truly do, I just like to know the big programmatic pieces before the budget, rather than during the budget, it puts us at a disadvantage.”

Board members also discussed the possibility of raising participation fees for athletics and activities at all the schools, noting that Wilton has fee schedules “substantially below other schools.” They asked administrators to research what increase might be acceptable to parents at each level.

Several BOE members remarked on a substantial increase in professional development, and asked Smith to see where cuts could be made.

“I look at the cuts we’ve made and feel they are very detrimental to our children, more so than some things like professional development. Maybe there are cuts that can be made this year that we can bring back next year instead, and we can bring back textbooks, library books the social worker… what’s going to influence our children the most are going to be books and more tangible items,” said Gretchen Jeanes.

Glen Hemmerle was in agreement, and then some:  “We’ve always said, under any circumstances, we would not impact the classroom, that was a vow we made. Not having textbooks affects the classroom, and it boggles my mind that we would even consider not being properly equipped, properly prepared and have our students not have access to what they need to learn from! As I look through the thousands of dollars of travel and professional development, we’ve got to find a way. If this budget doesn’t change, if we don’t add back those items, we’re cutting muscle, and we’re violating the vow we made to not do anything that would impact or harm the classroom.”

Adding back in the four items–excluding the alternative high school costs–was estimated to put the budget increase at 2.38%, which the Board members said was still the lowest in the DRG. They asked Smith to show them another budget with those items included, and reflecting other possible areas where costs could be trimmed.

Recent concerns about students struggling with the math curriculum were also addressed in budget terms. Finkelstein said she was surprised not to see more interventionists included in the budget.

“We heard some alarming numbers about the number of kids in need of math intervention. Can we answer why is there nothing in this to add?”

Chuck Smith, the assistant superintendent for curriculum, said that the issue of the number of students falling below grade level in math is a complex one, and that, at this point, putting interventionists up is the best solution to that problem.

“We’re entering a math curriculum review of curriculum assessment and our instructional practices as well as our professional learning. That is a place we want to put our efforts right now rather than throw more interventionists.” He added that the district has been “experimenting” with an intervention program at Middlebrook called AIM, which Smith said was more general support.

In contrast, the Middlebrook AIM program involves only one additional math teacher who provides support to larger groups of students who are below grade level but do not receive math intervention services. They estimated adapting this model to the high school would “most likely involve the addition of 3 FTEs (approximately $294, 000).”

“If it was a time we didn’t need to be making choices, we’d love to have intervention,” Chuck Smith added.

Board members were united in their dismay over the “startling number” of struggling students.

“The math curriculum is an example of something where we rushed into it, without the support, and it was thrown at us at a smilier time of the year, and we’re suffering for that and I don’t want to see that happen again, where our kids are struggling because we didn’t give the staff the support they needed when we literally threw a new curriculum at them,” said Laura Schwemm.

That was echoed by Finkelstein:  “We’re still suffering the fallout of a poorly implemented math curriculum, we have hundreds of kids who are paying the price.”