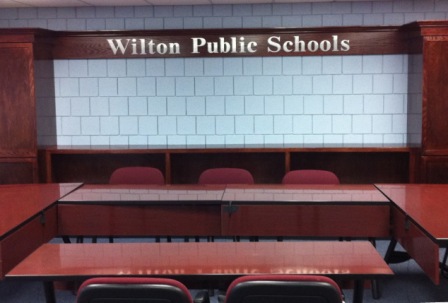 During last night’s Board of Education meeting, board members discussed several items regarding building renovations throughout the district:

Likly asked about a figure some parents have floated about the potential overall cost for the Miller-Driscoll renovation, saying he’s heard $28 million “tossed around–$14m one year, $14m next year. Birck replied that based on a figure given to the building subcommittee from the Board of Selectmen, they asked potential architecture candidates to bid on a project in the range of $32-35 million for the complete cost. “That was the number people bid on. We don’t know yet if that’s the right amount of money.”

The BoE also heard from Casey Healy, the lawyer representing town residents proposing to privately fund the installation of a turf athletic field at Middlebrook. Without a formal vote, the BoE decided to support the field-to-turf plan, and Likly added he will write a letter supporting the project.

Director of financial planning and operations for the schools, Ken Post, presented his financial report for the schools to the board. One of the major items he told them was that the report ending June 2013 shows an operating deficit of $624,569. As part of the discussion, covering factors that impacted the figures–including health care costs, salaries, and special education outplacement and litigation costs–Likly asked about the possibility of creating a reserve fund for special education. Currently any overages from money reimbursed by the state gets returned to the town, rather than reapplied directly to the budget needs of the schools. Richards noted that California law requires ending budget balances of 3% in case of situations like that. But Richards also cautioned that there might be charter implications with the town. Post said he would would talk to the town CFO about that.