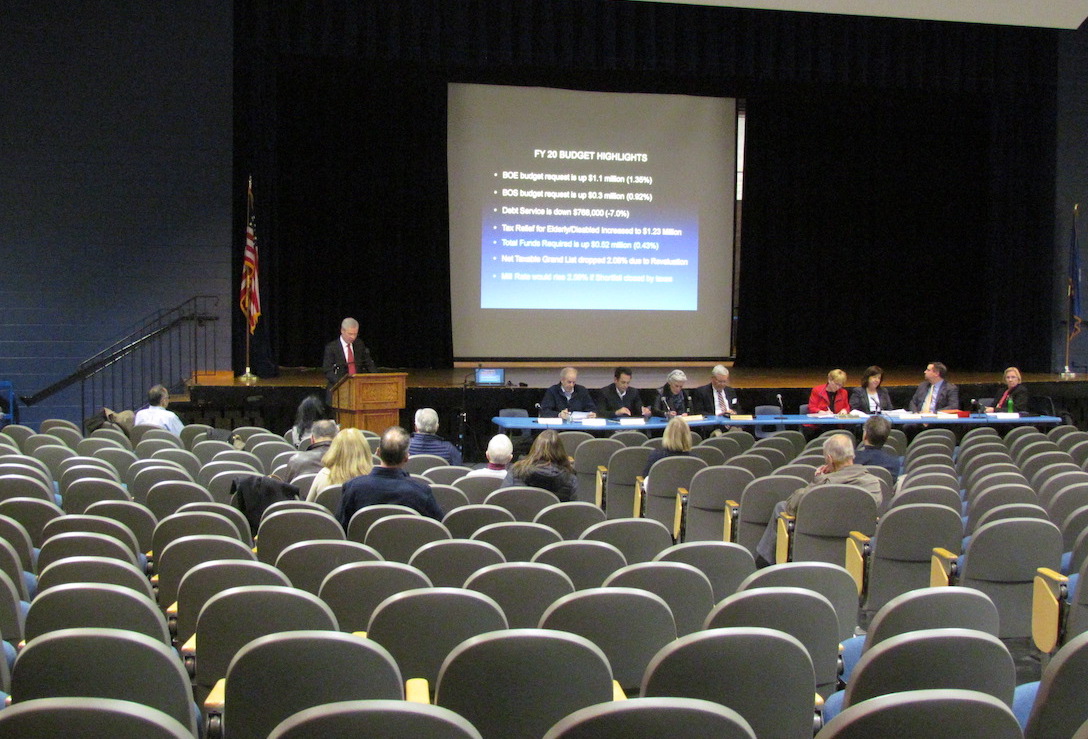 Town officials continued their public presentation of budget information on Tuesday evening March 26, with a second night of hearings for Wilton residents to learn about what is proposed for the FY2020 budget. The night was dedicated to a review of the Board of Selectmen‘s (BOS) requested budget covering projected expenses and capital expenditures for the town.

Like the night before, when the Board of Education‘s (BOE) requested budget was reviewed, the meeting was an opportunity for town leaders to explain to residents how their tax money would be spent–and to warn of the coming shock waves from possible legislative measures that threaten to add up to $14 million in additional cost to Wilton taxpayers.

The members of the Boards of Finance (BOF) and Selectmen were on hand, along with some of the heads of town departments. Aside from those individuals, the only other non-official people in the auditorium numbered less than a dozen. Officials wondered privately at the meeting’s end why so few residents attended either of the two evening presentations.

Nonetheless, BOF chair Jeffrey Rutishauser started the meeting with the same presentation he gave the night before, explaining how the mill rate will be calculated and what the current projected mill rate increase will be–2.56%–given the budget requests from both the schools and the town.

To close this gap, the BOF either has to look for places to cut in the budgets proposed by the BOS and BOE or raise taxes–or a combination of the two. Without budget cuts, to cover the budget for FY2020, the Mill Rate would need to increase by 2.56% over last year.

Other important points Rutishauser made concerned the financial health of the town, and how the BOF assesses that.

Then, he also explained why, because of several legislative moves in Hartford, that 2.56% projected mill rate increase calculation could be jeopardized–significantly.

“What I just presented is what would generally happen in a normal year. But this year is not normal. There are several legislative proposals being debated in the state government that would increase our costs, reduce our revenue sources or both. In the worst case scenario, the total financial impact could be up to $14 million negative for this and coming years,” Rutishauser told the audience.

In other words, on top of the $3 million officials are planning for now, Wilton may be on the line for an additional $14 million.

“There are even more proposals under consideration that we are concerned about. Not all may be enacted or in the coming Fiscal Year but Wilton will need to be prepared if the worst case hits us,” Rutishauser added.

He reminded those present that Wilton’s three major boards–Finance, Education and Selectmen–will be meeting Monday night, April 1, to assess the potential financial challenges coming from the State, and plan what to do if those challenges materialize.

Then Rutishauser turned the mic over to First Selectwoman Lynne Vanderslice, to explain the budget that she and the town department heads put together for FY2020.

Board of Selectmen Presentation

Vanderslice led off by taking a look at how town officials and staff approach town operations–focusing “on providing quality services at the lowest cost possible,” and have worked to be under budget for four years straight.

She added that under her leadership for the last three years, the average increase has been only 1.1%, and the thrown has come in under budget by a total of more than $1.5 million.

That, Vanderslice said, leads to an obvious question–if the town has operated so under budget, why is a budget increase this year even needed? Why are residents not seeing a budget decrease?

Her answer:  because savings have been in employee costs–high number of retirements that left spots which were left unfilled.

“We have made the decision not to fill a number of positions–we actually have gone down 6.5 positions, so we’ve had non-budgeted savings as a result of eliminating those positions,” she said, adding that the BOS philosophy is to wait for a vacancy or retirement, rather than force retirements or reduce staff.

Until an open position is filled, the work is covered by existing employees or overtime–something ok in the short term when a position is open, but it is NOT sustainable, Vanderslice said. “You cannot just burn people out like that, although we’ve eliminated one police officer position.”

In the FY2020 budget, the town has actually added back DPW positions–restoring the staffing level to pre-economic downturn levels, because demand for roadway and ground maintenance work has increased significantly. “Because we’re doing 15 miles/year versus the 10 [miles per year] that we did the five years before, versus the 4 miles a year we were doing 10 years ago. And we’ve had feedback from residents that there isn’t enough clearing on the sides of the road, complaints about the ability to see at some intersections.”

Vanderslice explained that the main drivers of the budget are wage increases–general wage increases are between 2.0%-2.5% in current contracts; group medical insurance cost increases; and an increase in subsidy at the transfer station due to changes in the global economics of recycling.

She also reminded the audience that the budget request does not take into account possible measures from Hartford that could hit the town.

“This is a status quo budget. This assumes status quo, it does not reflect the impact of $10 million coming down from the state.”

Vanderslice says her team has taken steps to reduce costs. Among them:

The town is working to address other challenges:

Vanderslice then showed how many town employees there are, as well as planned changes reflected in the budget. The net difference year-to-year is a 0.5 position.

The request for bonded capital hasn’t been finalized yet. The BOS is meeting with the BOE on April 1 to review the requests made for the school district, and then will make decisions on April 15 on which capital project requests they will recommend bringing to the Annual Town Meeting; those then will be passed to the BOF, which will give an its opinion at the meeting.

Vanderslice explained two capital projects that had previously been approved by the town, but have since been substantially changed:

The Bonded Capital Requests for 2020 are shown in yellow highlight below:

Due to extensive leaking at Town Hall, including over the Town Clerk’s office where irreplaceable town records are stored, Vanderslice says it’s imperative that the building’s roof be replaced, at a cost of $350,000. “We cannot wait until the town hall/campus project is done.”

She noted that town officials are concerned about the amount of current outstanding debt, and what would be added if all of these projects are executed. The amount on the scheduled for the new police building was an estimate originally made in 2013–which Vanderslice said likely will be higher when it comes time to execute a project “unless we come up with some creative solution.”

She added that the topic of how much is needed will be discussed during the upcoming tri-board meeting on April 1.

“With so many necessary projects–because our buildings are old, the systems are antiquated, things are ready to go–so we have to do some of this work. We have an expensive stadium track project that we were hoping we could do for a lot less money; we’re still investigating a way to bring that down, but that sub-base goes back to the 1980s and the surface on top as a 10-year life and we’re beyond the 10-year life. We have a lot of things on this schedule that have to be done, and how are we going to get them done and still keep debt at a level we’re comfortable with?”

Vanderslice said that “fortunately” there are a lot of developers interested in investing in Wilton and the Rte. 7 corridor is “extremely attractive” to them. Already there are several existing and in-process new construction projects, as well as anticipated projects in the works.

She described a potential senior living project being developed for parcels at 2 and 24 Pimpewaug Rd., which she said is a “nice alternative” to Meadow Ridge in Redding. There is current market demand for such a project, specifically because it would be rentals rather than condo. Vanderslice said that is “particularly attractive” to people looking to move their parents nearby and don’t want the high cost of investing at Meadow Ridge or residents who want to downsize and stay in Wilton.

“Demand is there. We lose a lot of active residents to Meadow Ridge, so we are very much interested in this facility,” Vanderslice explained.

As part of the project, the developers are interested in buying a small, .2-acre town-owned sliver of land in between the two parcels. The town is currently negotiating with the developer on that sale, and Vanderslice says a “much more favorable deal” than what was originally offered” has been worked out. Once that mutually-agreeable term of sale is set and approved by the BOS, a public hearing on it will be scheduled–likely on April 15.