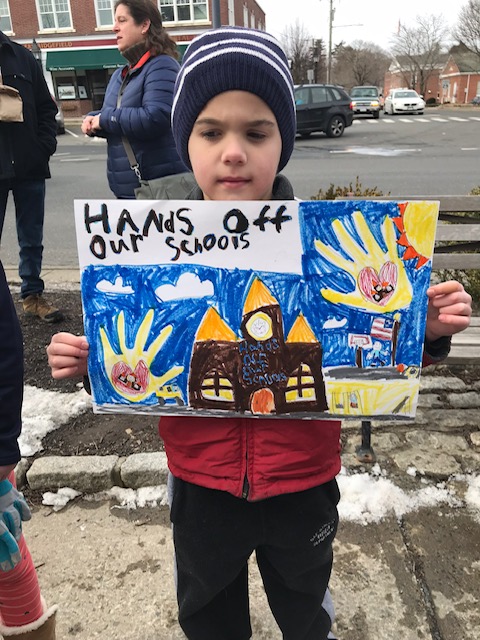 Hands Off Our Schools (HOOS), the non-partisan grassroots movement that advocates for local control for all Connecticut school districts, signed on its 10,000th member this past week. The group has grown dramatically in numbers and statewide reach since it was launched at a crowded meeting of concerned citizens in Wilton on Jan. 31 following Senator Martin Looney’s introduction of a bill to force school districts to combine with neighboring ones.

The group welcomes new members through its Hands Off Our Schools Facebook page and established a website.

“We are very excited that so many neighbors have taken a stand to defend our schools and preserve our autonomy,” said Bill Lalor, the chairman of the Wilton Town Republican Committee and the organizer of the Jan. 31 meeting. “I think it’s great that in two months 10,000 citizens from around the state have come together to remind the politicians in Hartford that local governance and accountability are bedrock features of Connecticut governance.”

According to a written statement, organizers say the group is “fiercely opposed to forced regionalization of school districts and state imposed punitive measures to coerce regionalization.” In that same statement, they outline core beliefs that are supported:  “voluntary shared services for the purpose of improving educational outcomes and reducing costs; the removal of state imposed barriers that unnecessarily drive up education costs; and measures focused on improving educational outcomes across all school districts.”

The group has written thousands of letters, articles and emails to raise awareness in towns all over Connecticut to the measures introduced in the state legislature to consolidate school districts and services–what HOOS leaders call an “attempt to seize control of local schools.”

Members of Hands Off Our Schools have also testified in large numbers at public hearings of the Legislature’s Education Committee.

“It is a privilege to know and work with everyone who has worked so hard to convey their views on these important education and governance issues to the legislature,” said State Representative Gail Lavielle, who represents Wilton, Norwalk, and New Canaan and has been a guiding member of the group.

“Ten thousand is just the start,” Lalor added. “There are thousands more out there who are looking for an easy way to take action and save our schools. We welcome anyone who wants to join our grassroots effort and make a difference.”