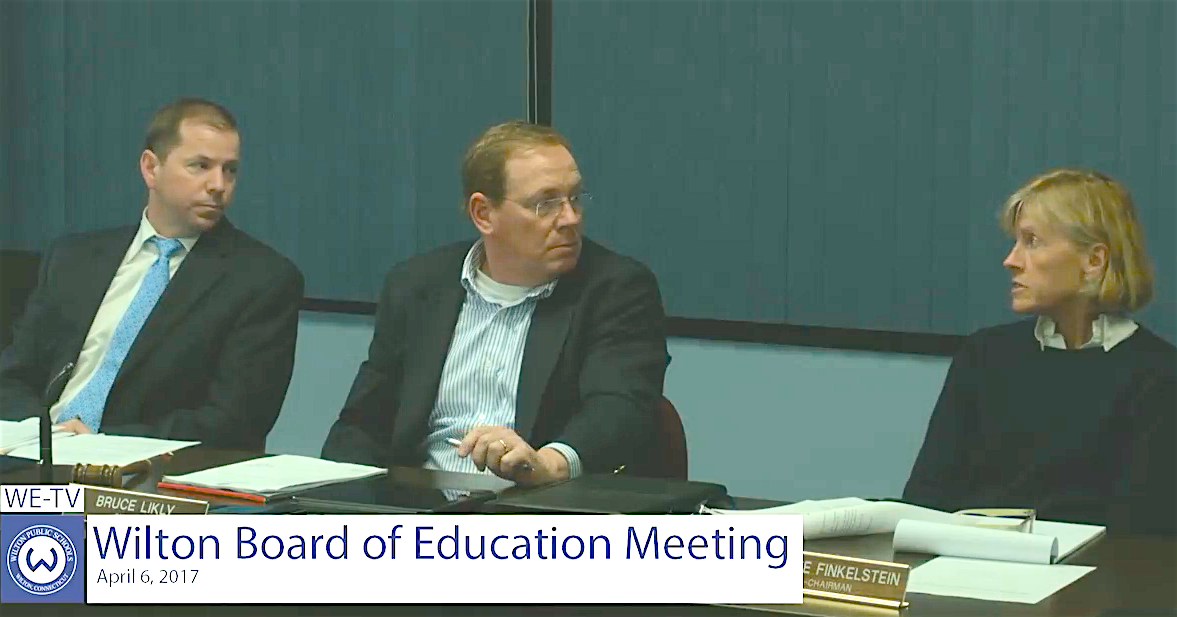 One of the ongoing themes during budget discussions between the Board of Finance and the Board of Education is consolidation of school and town services to (theoretically) improve efficiency and (hopefully) increase cost savings. At their meeting last night (Thursday, April 6), BoE members and superintendent Dr. Kevin Smith discussed the concept of sharing and consolidating some administrative functions between the schools and the town–specifically in finance management and human resources (HR).

Consolidation of services is something the schools and the town have already pursued in facilities and building management; Christopher Burney, the director of facilities for the town, took on similar functions for the school district last year. But despite pressure from the Board of Finance to move more quickly and mesh financial functions, school officials have been less quick to jump into sharing financial roles with the town.

Smith said that it’s been a discussion topic among the business operations subcommittee members for the last year, but wanted to discuss the concept and get feedback from all the BoE members.

He talked about what has been studied thus far about what’s involved in consolidating, including discussions with first selectman Lynne Vanderslice and Anne Kelly-Lenz, the town’s CFO. There are some functions that are more similar between the two entities than others.

However, according to Smith, there are areas where functions diverge, many of which are specific to school districts:  oversight of food services, transportation, inventory controls and asset management reporting, RFP development, and coordination of special services, “especially monitoring and providing feedback around mediations, which have the potential to be significant dollars.”

“Those would be areas in my own first round of thinking that we would want to retain here with tight oversight of the BoE,” Smith said.

Where there could be consolidation, Smith said the benefits would include eliminating duplication of efforts, potential reduction in staff, and more improved consistent financial reporting. But, he added, he has concerns as well.

“Wanting to ensure that there is open and responsive communication between the business office and HR, that there is availability and responsiveness when there are concerns or questions over accounts payable or billing; ensuring at the BoE I don’t want to be second in line to anyone for anything–if we have needs, I want those needs addressed in a timely manner,” Smith said.

In doing research, Smith said there are just a few examples of communities in CT that have shared financial services between schools and municipal offices, but one is in Madison, CT where he knows the superintendent well, so he can reach out and try to get a better understanding of how the relationship works. He’ll also contact the other three districts that are following the same practice.

Smith said he has scheduled a meeting with Kelly-Lenz to start to plot out roles and responsibilities, and continue to report back to the board.

While the Board of Finance has been eager to see progress in this area, Smith says he doesn’t consider the time it has taken for the business operations subcommittee to discuss it as well as for him to research and consider the question thoroughly to be a delay.

“I’m going through my own discernment process as superintendent of this district. Conceptually it’s an idea that makes sense but we have questions, and we don’t want to run headlong into anything without vetting it thoroughly.”

BoE member Glenn Hemmerle sits on that BizOps subcommittee; he’s not convinced that consolidating financial services with the town is the best way to proceed. He asked whether there are really economies of scale to be found, given how much work there is and that town employees are already pulling heavy duty workloads.

“I’m struggling to find significant value. If you listen to Anne and Lynne, in their budget presentations, they are full up and running full speed at Town Hall.  They’ve had staff reductions, everyone is working their fingers to the bone. Do they fully understand the workload? Payroll is more than just cutting 700 checks; it’s constantly making changes to payroll, answering payroll questions. Our checks are complex, more so than the town’s, because we have people who get paid in a variety of ways, in the variety of functions they serve. There are more than 5,000 purchase orders we handle. Does someone in the town’s accounting office have the time to add that workload without adding staff at Town Hall? If we have HR or payroll issues, I’m just not sure they have the work horses to do it. It doesn’t make sense for them to add people to take our work and lose our people. I’m not totally sold,” Hemmerle said. “It’s not cut and dry.”

Board chair Bruce Likly agreed when Hemmerle pointed to the example of Burney taking on additional work when he assumed oversight of the school facilities:  “Simply collapsing those two positions into one wasn’t sufficient.”

What’s more, said Hemmerle, the school district’s accounting staff isn’t huge to begin with. “He doesn’t have 18 people doing accounting functions–you can count them on less than one hand. I don’t see giant economies. You are still going to have to have people here that can answer questions, that can be responsive to needs and changes, responsive to Kevin’s work and expectations. I’m still not there yet.”

Lory Rothstein also expressed a concern about how all the work would get done. “The first thing comes to my mind is, how do you take two full-time stand-alone jobs and just fold them into one full-time job? I could see replacing one full-time person with a junior person, a lower level employee but I would be interested in learning more.”

The BoE members agreed that more information was needed. While Chris Stroup said the analysis was too incomplete to know how well services could be combined, “It would surprise me if at the end of analysis that efficiency and effectiveness would not be improved.”

Other questions that came up include whether combined financial staff would work out of the BoE building or Town Hall; what kind of tasks would need to be accomplished by consolidated staff; and whether the transition could be seamless.

Likly noted that combining services didn’t necessarily mean solely that the town would take over school functions. “I would assume that you would also look at it as being a two-way street. Perhaps we could take on some of their HR functions. It doesn’t necessarily mean that the task lives at the town, but rather the tasks are shared. If they need more HR support, and we have that, it’s a pooled resource.”

As for how fast the conversation about consolidated services would move from theoretical and research to making it happen, Rothstein pointed out that earlier in the meeting, the board had voted to not renew the contract of Dick Huot, the interim Board of Education finance director.

But Hemmerle was quick to respond that any change in functions wouldn’t happen by the end of June, when Huot’s contract ended. Instead, someone new would be hired to oversee financial management at the district–at least for the time being. “Kevin is working on filling that need,” he said.