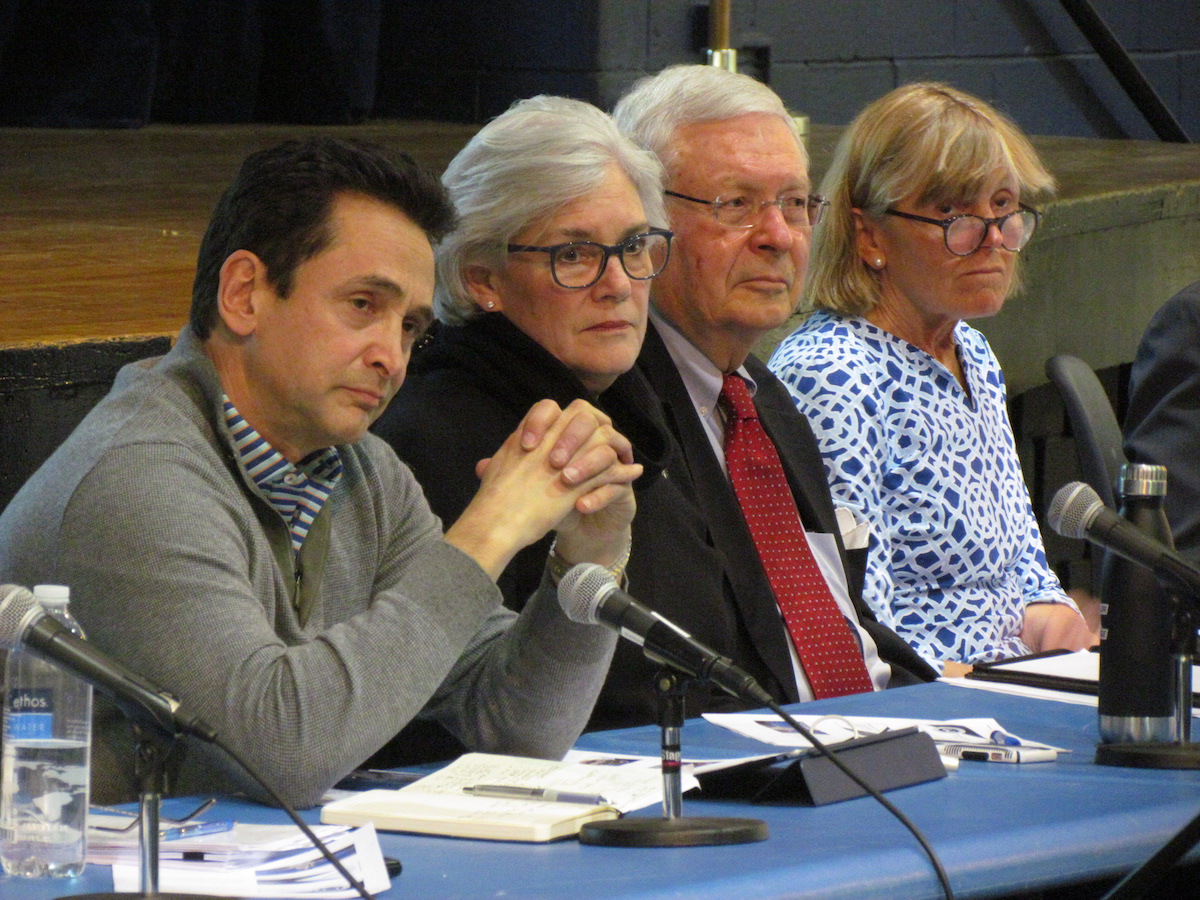 John Kalamarides is a member of the Board of Finance.

When Republican Board of Finance members presented opening statements at our April 2 Mill Rate meeting, I was shocked. Each said they wouldn’t approve any Board of Education and Board of Selectmen budget increases this year.

What changed overnight that each would endorse a 0.0% increase?

Usually we present our individual ideas; now a voting block had made up their minds without consulting us or the BOE and BOS members.

Only one night before, the first selectwoman led a Tri-Board meeting; all three boards agreed on a strategic FY-2020 plan to deal with increased or new taxes threatening Wilton–and every other municipality–from Hartford’s current legislative session. That included agreement that no budget cuts or special reserve funds beyond what was already budgeted were warranted at this time.

That Tri-Board determination was appropriate. During a visit to Hartford to meet face-to-face with Democratic Senate leaders and Finance Committee members, I was assured there’s very little chance of SB 431 passage. This bill would repeal the car tax and establish a homestead exemption, both of which could have significant fiscal implications for Wilton and all other towns. Importantly, after checking with neighboring BOF chairs, no other town made budget allocations to address these potential concerns.

After eight months of due diligence, we asked the schools and town to bring requests in respectively at no more than a 1.6% increase and 2% increase. They came in at 1.35% and 0.92%.

The BOF requested complex and exhaustive metrics meant to unearth answers and statistics comparative with other area school districts. The four Republican BOF members believed school budgets should decrease with falling enrollment, as would happen in the corporate world.

This issue has been discussed and brewing in our meetings for the past four years. It became clear these members had issues believing that education and pedagogy had changed. In fact, methods have changed completely. When school administrators offered these members opportunities to witness what happens in classrooms and talk with teachers and coaches, they declined.

A 50-page report of charts and graphs showed Wilton is consistently in the middle or low end of our District Reference Group (DRG) for spending:  per-pupil (PPE), Wilton is sixth of eight; in compounded budget increases since 2014, Wilton is seventh of nine.

An exciting change in next year’s school budget is an alternative school, which would save Wilton approximately $430,000 and retain students rather than outplace them to specialized schools far away.

A BOF survey showed the single most important reason people move to Wilton is school quality:   78% of respondents said Wilton’s current budget is not too high; 55% were open to a 1.0% increase; and 42% were open to a 2.0% increase.

Two BOF public hearings this year had little-to-no attendance, and certainly no pushback on proposed BOE and BOS budgets. This is typically–reasonably–interpreted as town-wide assent.

Those voting to cut the BOE budget cited Wilton’s recent property revaluation, which resulted in a grand list decrease of 2.08%, with concerning discrepancies between some property types versus others. But importantly, these revaluation decreases are much less than nearby towns, and fiscal prudence our BOE and BOS already show is the best method of mitigating these revisions.

The First Selectwoman tightened her budget since taking office. Some employees are doing what three people used to; other positions remain unfilled. She asked for a 0.92% increase. How much tighter can the budget get without causing problems?

Another concern if the budget is frozen is Wilton Library, a broad-missioned, essential town resource which will be at real disadvantage when seeking to maintain resources—to the detriment of all Wiltonians.

Our dissenting members have decided a $1mm restricted school fund should be used. That fund isn’t an operating budget fund. It’s funded by continuing education fees, not by taxpayers. Its purpose is to renovate two classrooms for very popular culinary arts classes. Because a suitable plan and contractor hasn’t been finalized, the project was delayed. To ask the BOE to use this money for operational expenses is akin to Connecticut robbing the transportation fund for operating expenses. It is disruptive, creating very difficult decisions.

Why vote to support the BOE and BOS requested budgets?

First, Hartford’s worst threats are overblown (perhaps for partisan reasons) and not believed by other BOFs.

Second, our schools and town have done an excellent job of preparing this year’s budgets, well-below BOF budget guidance.

Third, chipping away at Wilton’s finest resource and amenity only decreases its resources and plant, its value and product.

Fourth, the BOS budget needs its small requested increase to not choke its operations.

It makes no sense to deny funding our requested schools and town budget increases. There’s no justification in making 11th-hour decisions as a voting block that goes against everything done in preparation for the Annual Town Meeting and ignores the exhaustive, thorough, eight-month review process.

Our Republican colleagues’ tone has been too negative on Connecticut’s future, the State’s ability to solve its fiscal problems, and our town’s financial strength. This isn’t the place to delve into serious decisions finally being made in Hartford to address seven decades of pension underfunding. Recent concerns indicate Hartford will no longer continue ‘kicking the can.’ Wilton has worked through problems before, and we will again, along with 168 other municipalities facing similar issues.

This also isn’t the place to discuss the effect a “sky is falling chant” may have on Wilton’s real estate market:  we’re in the same position as many, many towns, but some people in Wilton overstate our challenges.

I applaud the BOE and BOS on their fiscally responsible budgets and reaffirm my vote against BOF determination to deny a budget increase. We should be proud to live in Wilton, and look forward to fighting for our schools for years to come.