Home Community BoS Gives 2.5% Raise to First Selectman–Even Though Vanderslice Said Not To 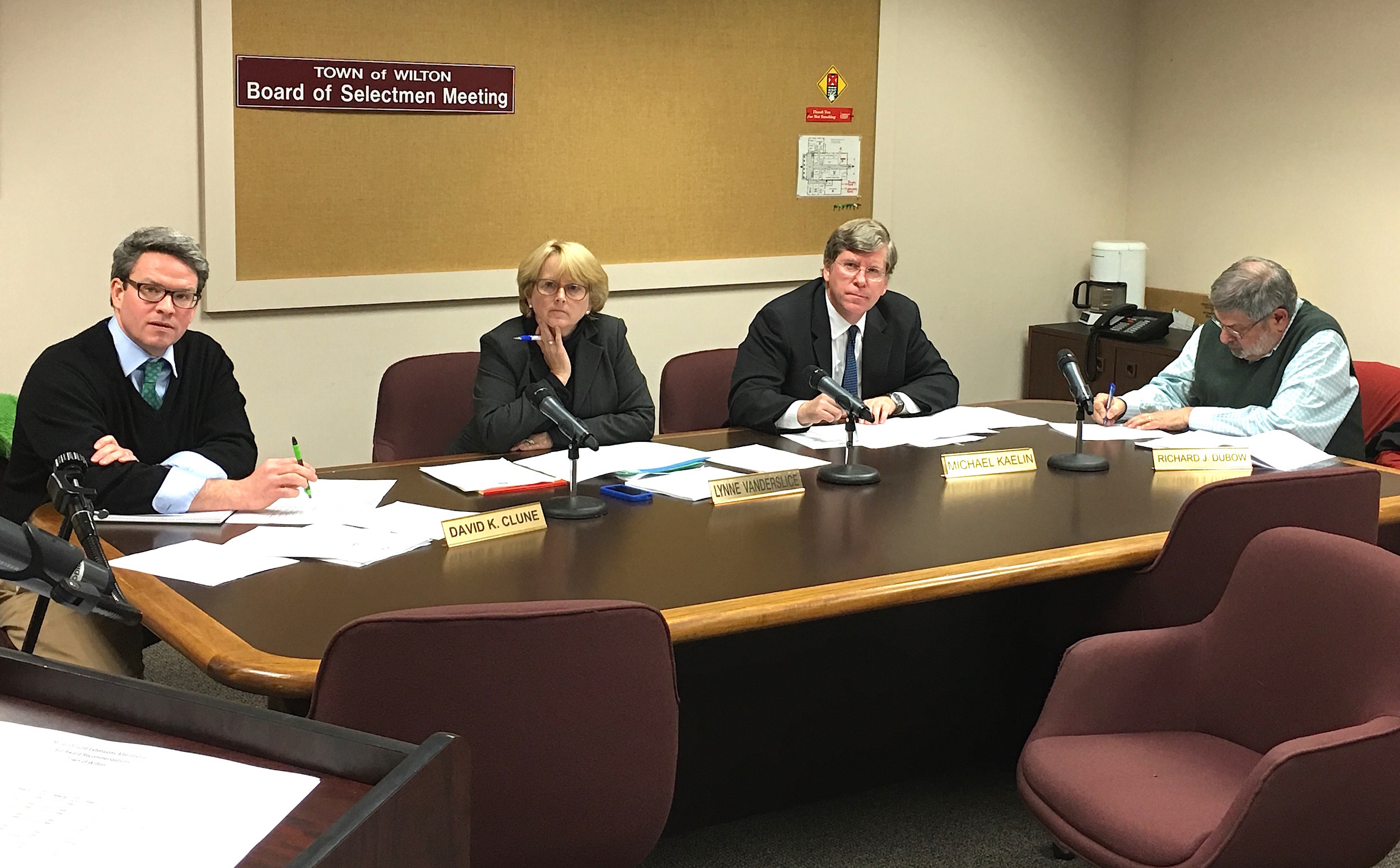 At Monday night’s Dec. 7 meeting of the Board of Selectmen, one of the items on the agenda was the question of the annual salary increase for the first selectman. When she introduced it for discussion, Wilton’s newly elected first selectman Lynne Vanderslice acknowledged that she didn’t necessarily have the ability to give official input, but she did want to express her thoughts.

“I would suggest that you don’t increase the salary beyond the current level,” she said.

The matter was eventually moved to executive session at the end of the meeting, and it was discussed by the other three selectmen–Michael Kaelin, Dick Dubow and Dave Clune–who invited in the town’s human resources director Sarah Taffel. Vanderslice was not in the room for the discussion.

Despite Vanderslice’s appeal, the selectmen voted unanimously to increase the salary by 2.5-percent, effective retroactively to the start of her term on Dec. 1, 2015. That raises the salary for the town’s top official from $136,108 to $139,511. According to Taffel, the salary was last increased on Dec. 1 of last year.

When asked why she recommended not increasing the salary, Vanderslice told GOOD Morning Wilton, “My recommendation was based on several factors including consistency with the goals I expressed as a candidate.”

Kaelin sent a statement by email that echoed the comments he made during the public portion of Monday’s meeting.

He also noted that the increase can still be considered a budget-conscious move.

“Because of other changes in personnel costs, I know that we are able to give the first selectman a modest increase in compensation without increasing overall personnel costs, and I believe it is important we do so for all the reasons stated above.”

Dubow concurred, saying that while he very much appreciated Vanderslice’s offer to forego any salary increase for her first year in office, he voted to bump up the first selectman’s salary for several reasons.

“I did so (1) in recognition of the increasingly complex and demanding responsibilities of the job, a job Wilton expects to be accomplished without the support of a town manager or administrator that other municipalities routinely provide; (2) in order to avoid further compression in the relationship between the first selectman’s salary and compensation for other leadership positions in town government; (3) to help ensure a competitive salary that will attract an increasingly wider and economically diverse group of candidates able to seek the office in future years; and (4) because of my own personal commitment to gender equity, specifically in this case, the principle of equal pay for equal work.”

Clune says he was also thinking about the future when he agreed with the reasons for the increase provided his colleagues.

“The town benefits when we have a number of candidates willing to run for the position of first selectman. This increase helps ensure the salary is potentially attractive to a wider group of candidates in the future.”