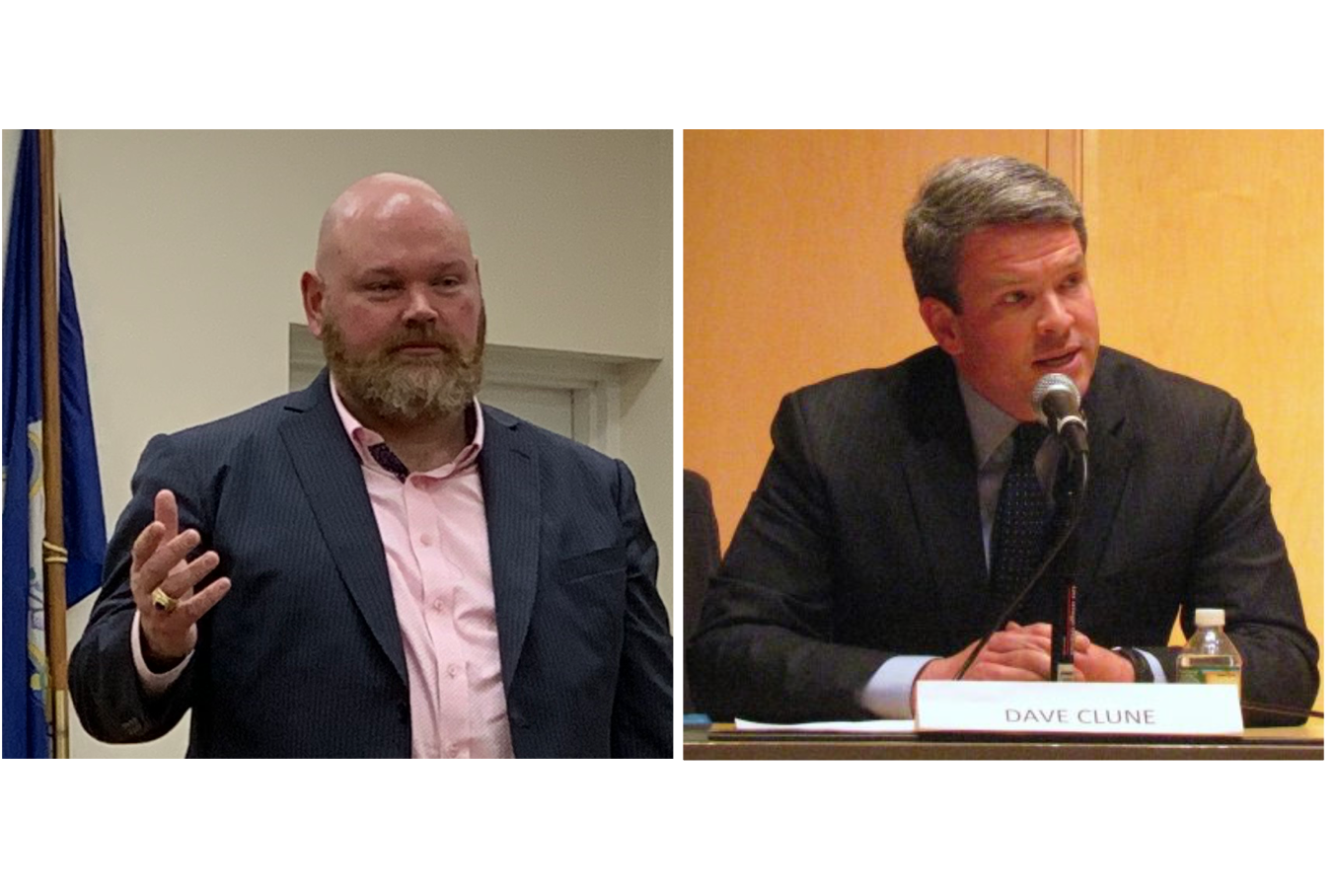 UPDATE, Thursday, Aug. 8, 10 AM–Wilton Republican Town Committee chair Bill Lalor kept his comment minimal when it came to Powers:  ”I think voters will see Mike Powers for what he is and just as importantly what he isn’t.”

He preferred, instead, to support the slate the RTC did endorse.

“My job as chair is to focus on our endorsed slate: I am genuinely excited about them as candidates, and I think voters will like what they hear and see from them—from Lynne’s very capable and proven leadership for Wilton, and across the board. They are an exceptional group that includes many new faces and has deep ties to Wilton,” Lalor said.

He was also supportive of Clune’s move to run again, saying, “I am glad to know Dave Clune will be on the ballot. As I’ve said, we think highly of David. the RTC didn’t run someone for that BOS seat just for the sake of running someone. That’s also in keeping with the RTC’s endorsement of two other, nonaffiliated individuals on its slate.”

And even though election season has now begun, he kept the competitive talk rather friendly:  “I should also add Tom Dubin and I had our every-so-often Coffee at Orem’s last week. We even agreed on a few things, mostly related to oatmeal toppings. But it was a good way to start the campaign season.”

UPDATE, Wednesday, Aug. 7, 8 PM–Michael Richard Powers sent GMW a press release about his petition candidacy for first selectman shortly after we filed the story (below) about his possible effort for a primary not materializing. Despite initially saying he’d seek signatures to push Wilton to a Republican primary, Powers did not turn in any signatures to the town clerk by the deadline.

Instead, Powers says he “chose not to seek a Republican primary” because he’s questioning the validity of the Wilton Republican Town Committee’s nomination meeting and the entire RTC candidate slate altogether.

“As the Wilton RTC’s nomination meeting was unquestionably unethical, the actions of the RTC’s Rules Committee may have also vacated the validity of the entire meeting and thereby the entire slate of candidates,” Powers writes in his press release.

[Editor’s note:  Powers responded to a question about whether he attempted to collect any signatures before the deadline by repeating his statement that, ”When it became apparent that the RTC’s actions questioned the validity of their slate of candidates, I chose to focus on my campaign as a Petitioning Candidate.”]

Writing in the third person voice, Powers’ statement reads:  “Michael Richard Powers is excited and energized that he is on the ballot for this November’s election for Wilton’s First Selectman! Michael looks forward to continuing his candid and transparent conversations with the Wilton voters regarding the future of our Town.”

Although he says it may be a question for the courts,  Powers himself is not pressing the issue in the legal system. Before the RTC nomination meeting, he did seek to file an injunction to stop the meeting from happening, but withdrew it before any action could be taken.

In the meantime, Powers writes that he “…will proceed with his candidacy, focus on the substantive issues facing our Town, and leave the questions regarding the validity of the RTC’s slate of candidates for this November’s election up to the Courts.”

BREAKING NEWS, Wednesday, Aug. 7–Today at 4 p.m. was the deadline for filing petitions for this season’s elections and the clock ticking from 3:59 p.m. to the top of the hour had a significant impact on Wilton’s elections. By the time the deadline came and went, one candidate–Dave Clune–had turned in enough signatures to get on the ballot as a petitioning candidate running for re-election to the Board of Selectmen, while another–Michael Richard Powers–did not make the cutoff to hand in signatures to force a Republican primary for the first selectman’s race.

Clune confirmed to GOOD Morning Wilton that he had handed in signatures to the Wilton town clerk’s office in order to be listed as an unaffiliated candidate for the Board of Selectmen. Those signatures will now be verified as registered Wilton voters by town clerk Lori Kaback and then sent to the CT Secretary of State’s office for final verification, in order for Clune to be an official candidate.

Clune was first elected to the BOS in 2015. He’s hoping to be re-elected in a race that will see four people–Clune, fellow current BOS member Joshua Cole (R), BOF member Ceci Maher (D) and Ross Tartell (D)–vying for two seats on the board.

Even though he’s not in her party, First Selectwoman Lynne Vanderslice tell GOOD Morning Wilton that she is pleased Clune is running again. “At the moment, we have a highly effective Board of Selectmen. Dave, as a member of the board and as second selectman, has had a key role in our effectiveness. Our board is also representative of Wilton’s demographics, with Dave representing the largest group.”

As for Powers, in July he told GOOD Morning Wilton that he would bring Wilton Republicans to a primary in order to become the party’s first selectman candidate on the ballot, pushing out incumbent First Selectwoman Vanderslice (R), who was endorsed by the Wilton Republican Town Committee on July 23.

According to Republican registrar Annalisa Stravato, Powers did get papers to collect petition signatures for a primary, but he did not hand in the required paperwork to the town clerk’s office by today’s 4 p.m. deadline–which means the possibility of a primary completely goes away.

Powers did submit signatures to get on the ballot, and those signatures have been sent to the Secretary of State for official validation. If he’s successful at getting on the ballot, he won’t appear as a Republican. Instead, he’ll be listed as a petitioning candidate for first selectman, after Vanderslice and endorsed Democratic candidate, Deb McFadden. There is no other candidate running for the office.

This story is developing and updates will be added as we receive further information and when warranted.