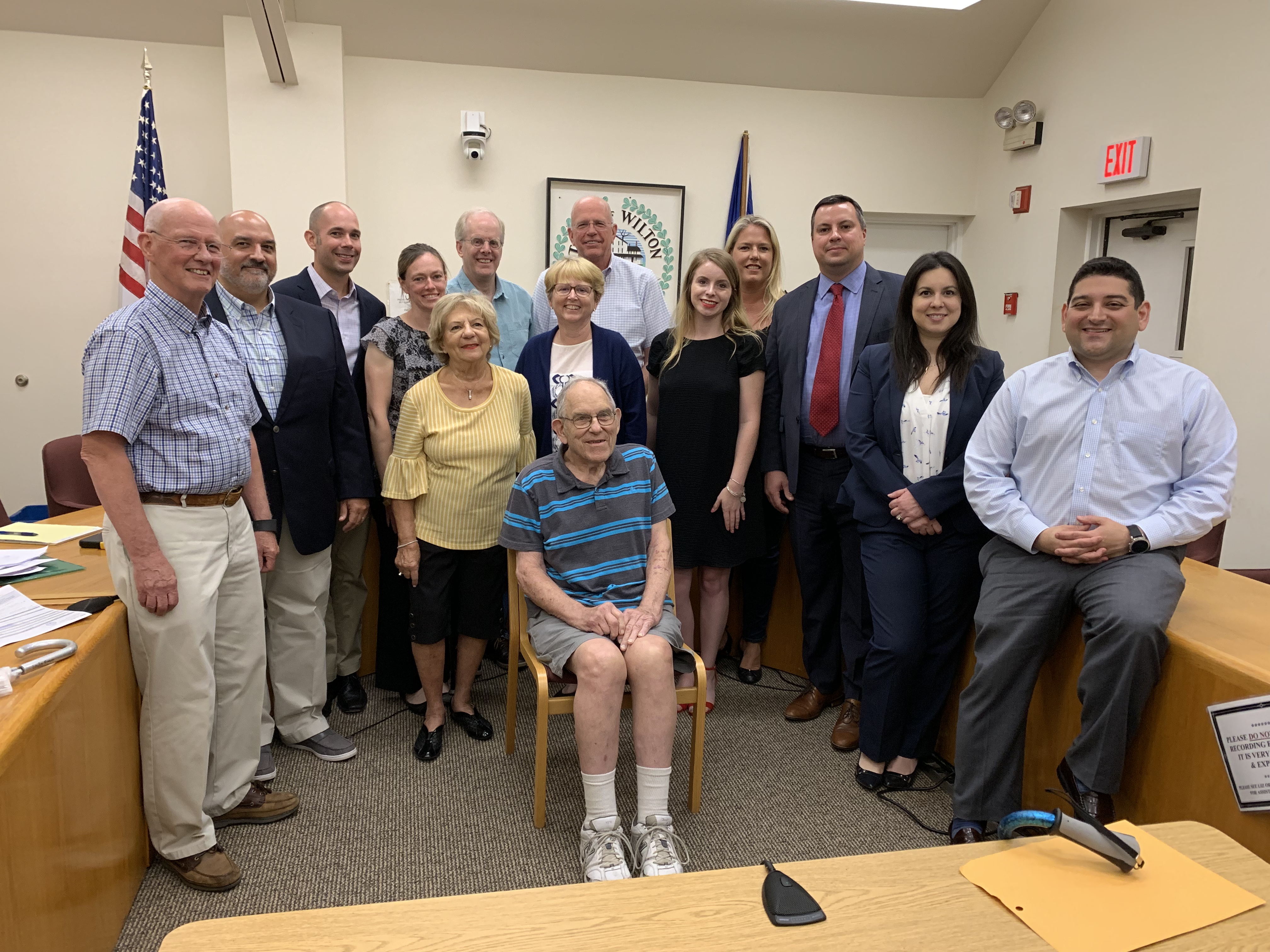 We’ve got the story in this special video report:

At last night’s Republican Town Committee Convention (July 23, 2019), the RTC members nominated their official candidates who are going to run in November’s election. They met at the Town Hall Annex and nominated 19 people who will be on the ballot in November.

Going into the meeting, observers knew that it had the potential to be somewhat contested. The presumed and very popular party favorite to be the RTC’s endorsed nominee for first selectperson, incumbent Lynne Vanderslice, knew that she was going to be challenged from within the Republican Party.

RTC member Michael Powers had announced weeks before that he planned to seek the party’s nomination to run for the position, and if he didn’t get it, he was going to find other ways to get on the ballot–which is what happened during the meeting.

During an RTC convention when the party members choose their endorsed nominees, the meeting is open to the public–anyone can attend–but the only people that can really participate actively and cast a vote are elected RTC members. At the July 23 meeting, only 31 members were in attendance to actually participate in the vote.

To start the meeting, RTC chairman Bill Lalor very specifically started a conversation about the bylaws and rules as they related to the process of endorsing candidates. He went through a long explanation and read how the rules would relate to the State RTC rules, State regulations, Wilton RTC bylaws and policies. He did so because in the 72 hours preceding the meeting, there had been a lot of discussion and emails between members–initiated by Michael Powers.

Powers told RTC members that he planned to challenge rules he perceived as being created to block him from nominating himself from the floor. In fact, Powers filed an injunction in court late Tuesday afternoon, before the meeting, to eliminate one of the rules. During the meeting on Tuesday night, Powers also made a motion to eliminate that rule altogether, and eventually, what’s exactly what the RTC voted to do–they voted to eliminate “Rule number five,” which said, “No candidate can nominate himself or herself from the floor.” Eliminating that rule allowed Powers to do just that–nominate himself.

The RTC members then began to go through each of the candidates they hoped to endorse, one by one for each of the roles. They nominated, discussed, and then took a vote, almost unanimously approving everyone on their initial slate–up to, that is, the first select person race.

Zoning Board of Appeals

Then everything turned dramatic. Wilton’s State Rep. Gail Lavielle nominated Vanderslice to be the first selectperson candidate. She gave a three minute long, glowing speech, recounting all of Vanderslice’s successes in office, and giving reasons as to why Lynne should be nominated.

Then Michael Powers nominated himself. He said that the town has not been managed correctly and that what people believe to be true is really smoke and mirrors. Then he also criticized Vanderslice for what he said were problems with the school.

Then discussion started. One person after another after another spoke up on behalf of Vanderslice. Don Sauvigne said he’s lived in town for 30 years and “can’t think of anybody who’s done as good a job as Lynne Vanderslice has.” He also says that she has “won the hearts and minds of Republicans, Democrats, and unaffiliated voters alike.” Christine Finklestein, who’s the chair of the Board of Education, said that there are “50 example of how Lynne Vanderslice is a true partner to the schools.” Lalor, the Chair of the RTC, added, “We need Lynne right now doing exactly what she’s doing.”

After the meeting, Powers said, first of all, he wasn’t surprised by the outcome, and he was prepared for what happened. He also explained that he planned to try two different ways to get on the ballot:  the first is by petitioning on as an unendorsed candidate. He had already collected enough signatures to file a petition with the Secretary of State’s office to try and do so.

The other way, he said, was that he planned to push for a primary, to happen over the summer. He explained he would try to collect enough signatures from Republican voters to challenge the RTC decision and challenge Lynne in a primary. When asked what he thought about the fact that a primary would cost the town money, he replied, “I would accept for Lynne to withdraw, if she’s afraid of the cost…To the townspeople, also. If Lynne wants to withdraw to save the town money, like she has done with the reduction of her salary, and also her own personal expenses, I’m fine with that. I think that gives everybody more of a chance to know who I am, what’s going on, and what Lynne’s position is.”

RTC chair Bill Lalor rejected Powers statement and said he was thrilled about the slate his party was putting forward.

“Obviously, Lynne is not going to withdraw. I mean, she’s extremely qualified, we want her back, she wants to come back, the voters want her back. It’s a complete farce for him to suggest Lynne step down. He’s going to cost the town money, and there’s really no way around that. I’m really excited about the people we have. I think at every position we feel they’re a great group. It’s diverse. I mean, we’ve got some new, young faces. I think this is important too, we’ve endorsed two non-affiliated candidates. We didn’t oppose and field a candidate to oppose [unaffiliated BOS candidate] David Clune just for the sake of fielding a candidate. We think highly of David and the work that he’s done on the Board of Selectmen. We’re not going to field somebody just for the sake of opposing David.”

“I’m pleased to again to receive the nomination for First Selectwoman and thank those who supported me and spoke about the successes of my administration. I want to thank and recognize the town employees who collectively contributed to those successes. Four years ago, residents overwhelmingly supported the goals that I put forth for the town. Residents have seen those goals realized and can expect that I will continue my focus on moving Wilton forward in a positive direction. We have a good team on the Board of Selectment with diverse experience and varied demographics. I hope the team remains intact, with Josh Cole and Dave Clune also returning in December.”

Wilton Democratic Town Committee chairman Tom Dubin also commented:  “Wilton is such a wonderful place to live, but Lynne Vanderslice and the Republican Board of Finance do not give us a sense of optimism. Our elected Republicans have been offering narrower and narrower visions of what Wilton is and what Wilton can become, and nothing in their 2019 municipal slate suggests they will change their path. In contrast, 2019’s Democratic candidates are fully invested in Wilton. They offer optimism, engagement, and a collaborative spirit that has been lacking for the last several years of complete Republican political control. They look forward to giving Wilton a choice that embraces our future.”