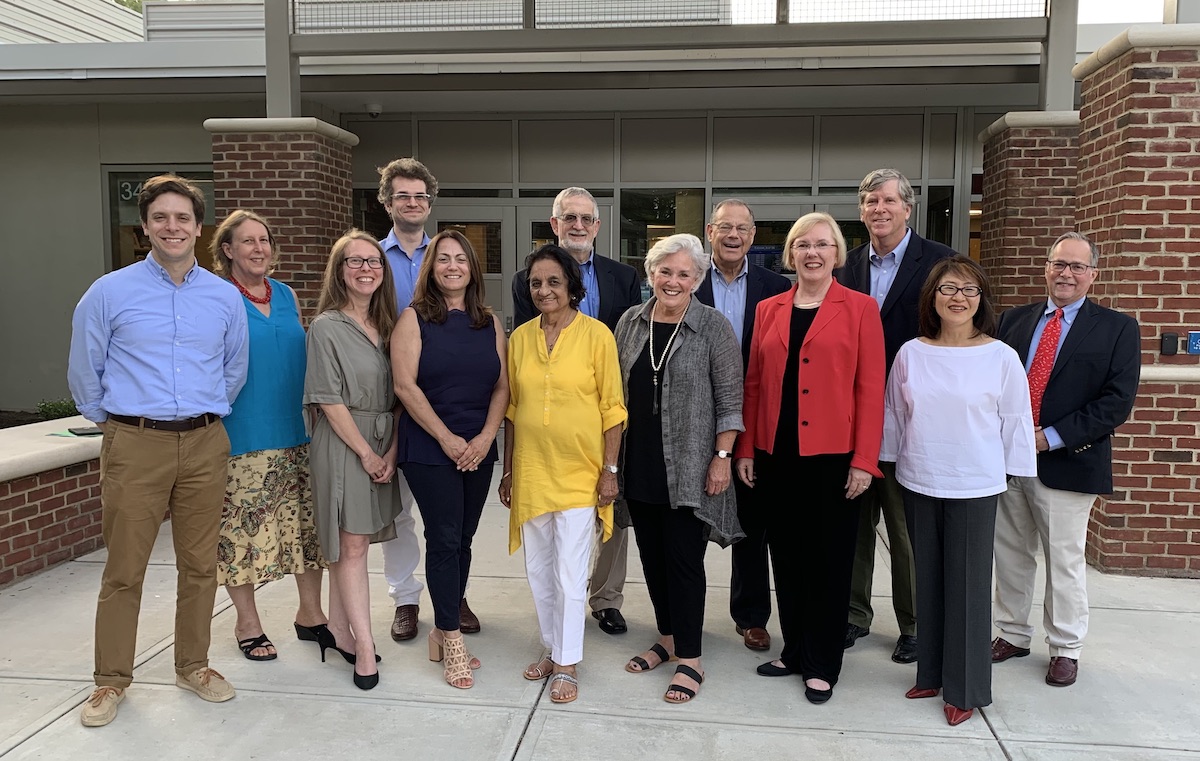 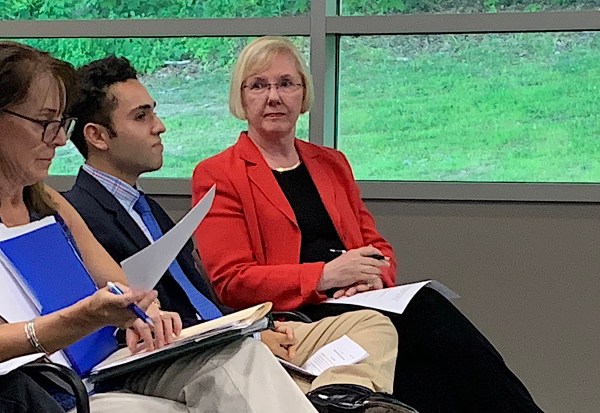 There are both familiar folks and newcomers on the Wilton Democratic Town Committee‘s endorsed slate of candidates that will head into the 2019 municipal elections. Once again, the DTC chose Deb McFadden (pictured left, in red) to challenge Lynne Vanderslice for the job of Wilton’s first selectman (or selectwoman, as the case may be). McFadden leads one of the longest lists of endorsed candidates from the DTC in recent memory–during the Wilton Democrats’ caucus on Tuesday evening, July 16, 18 candidates were endorsed to run for office in this November’s elections

It took about 15 minutes in all for the caucus to unanimously approve the total list as one single vote, and adopt the 2019-2021 platform. Almost 40 registered Democrats were in attendance at the caucus.

“It’s come together so beautiful, we have a fabulous slate–it’s really strong,” DTC chair Tom Dubin said. “The people on the ticket are fully engaged in Wilton, they have kids in the school, they’ve lived here a long time, they’ve volunteered, they’ve run businesses. Quality goes all up and down the ticket.”

Candidates in the running for the major seats include some names voters will recognize, as well as others new to local politics. Here’s who the DTC endorsed (all four-year terms, unless otherwise indicated): 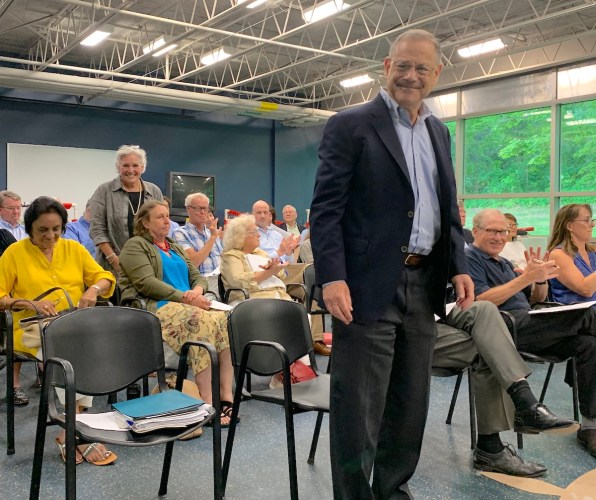 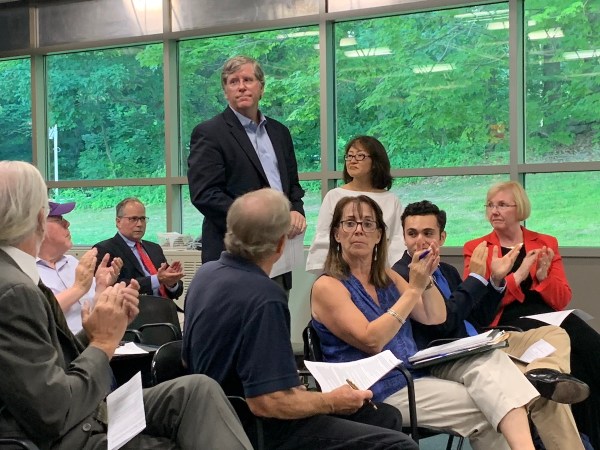 Zoning Board of Appeals

Several candidates spoke with GOOD Morning Wilton at the caucus.

Deb McFadden said she was excited to run again. “I’m in it 100%, and in it to win it.” She added that she’s thrilled with the way the DTC is approaching the election. “It’s conceivable we could end up with the majority on several boards, because we’re not just running for minority seats. This is the most aggressive since I’ve lived in town. I’m very excited.”

“This is a well thought out, well-crafted ticket. We have people that have skills,” she continued. She specifically mentioned Florence Johnson for P&Z, Savet Constantine for BOE coming from years of PTA experience, and Chris Stroup for BOF, of whom she said, “There’s no one in this town who can crunch numbers like Chris does. And he really understands education, so he’s coming to Finance from Board of Education, which gives strength to that whole [board].”

Ross Tartell, who also served as chair of the DTC’s nominating committee, said, “It’s an unbelievable slate. I don’t know who the Republicans are putting up but whoever it is we’ll give them a run for their money.” Of McFadden’s race against Vanderslice, Tartell added, “Deb has a really good shot.” And the others on the slate? “They’re so knowledgable. It’s a slate I’m really proud of. We selected them based on confidence, motivation, involvement in this town, and they can play well in the sandbox. Because we don’t want partisanship on the boards.”

Regarding his own shot at running for a seat on the BOS, Tartell said, “We have a real chance to change the trajectory of the town. There are such resources and strength in this town. I’m so excited about getting on the Board of Selectmen.”

He added that the BOF members are “all well-meaning” but that, “They’re making decisions based upon what they personally think is right and needed, rather than the input they got from the public, from the Board of Education. It was just wrong.”

Kaelin spoke about the importance of getting involved in the community one calls home. “We’re all in this together. We all have a responsibility to make this a better place,” he said, and applauded first time candidates like BOF candidate Jung Soo Kim. “She was the perfect person for that position. She never thought of doing this before, but she’s motivated by the same thing we all are–if I don’t do it, who’s going to?”

Kim agreed with that sentiment.

“The one woman on Board of Finance was stepping down. Two-thirds of our town budget is for our schools. There was nobody [on BOF] who was a parent with children in the school system currently. We get to see what our kids need, what the teachers are hoping for, what are on the holiday wish-lists. I felt that, to not have that say, to not have anyone represent us, that’s not us,” Kim said.

She also said she got support from an unexpected place–her oldest son, a rising junior at Wilton High School. “I asked him what he thought about my running and he said, ‘Of course you should do it!’ I thought he would be mortified, but he said, ‘You can get things done, it’s your responsibility.’ When your kid tells you have a responsibility to do your duty as a citizen, it makes you think.”

Savet Constantine called her run, following years of service on PTA, a “logical progression of knowing administration, knowing parents, knowing teachers, and to facilitate communication. Strong schools equals a strong town. We’re all concerned with fiscal viability and real estate values, and we’re all concerned with how our children do in school and that they get a proper education.”

Ceci Maher also had high praise for the entire slate. “I’m very excited to work with all of the people, it’s a terrific slate and I think together we are going to do great things as we work through the campaign and work together to make things even better in Wilton. I’m excited about it

Wilton Republicans reacted to the announcement with comments sent to GMW.

Lynne Vanderslice commented, “During my 32 years in Wilton, I don’t recall the voters being presented with a greater contrast. My administration has been successful in reducing the cost of government and promoting appropriate and necessary grand list growth. The candidates chosen by the DTC have been out front in advocating for more spending, starting with Ross Tartell and Deb McFadden’s support for spending $1.4 million on an unnecessary expansion and renovation of Fire Station 2. The Planning and Zoning candidates send a clear anti-grand list growth message,” adding, “I look forward to talking about that contrast throughout the campaign.”

Wilton Republican Town Committee chair Bill Lalor mentioned his group’s own slate-choosing process in one week, on Tuesday, July 23. “We will announce our slate in a week. The GOP slate will be a serious and seasoned group of men and women with a demonstrated track record of pro-growth policies that safeguard the things that make Wilton a great community. They will offer authentic and proven leadership. By contrast, much of the Democrat[ic] slate has committed itself to policies that very often elevate politics and ideology above Wilton voters, taxpayers, students, small business owners, senior citizens, and others. I am looking forward to the campaign.”