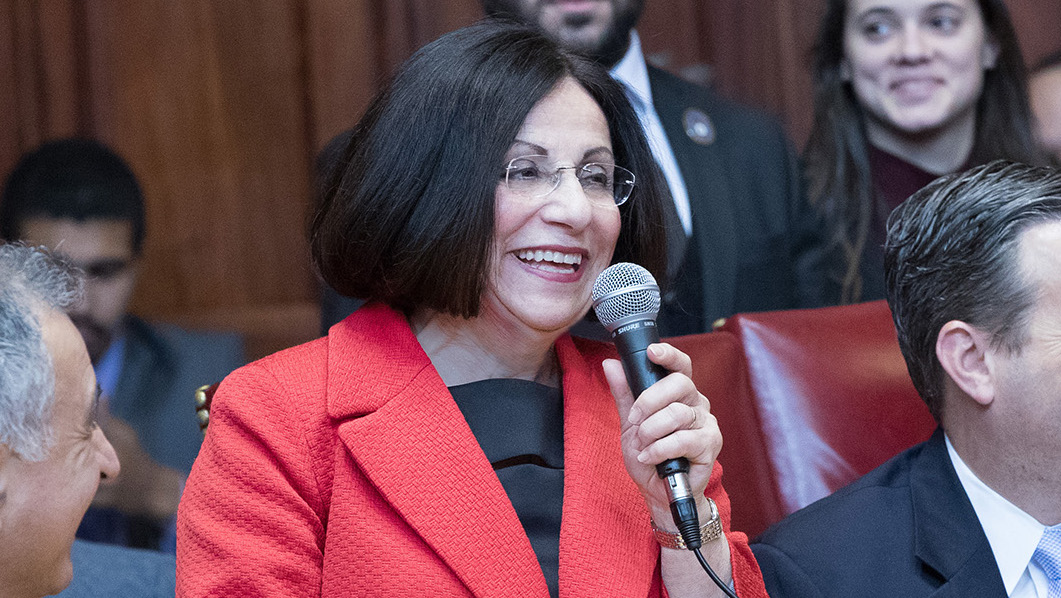 Former State Sen. Toni Boucher made a surprise announcement Wednesday morning: the long-time Wilton resident is re-entering the political arena to run for her former 26th District State Senate seat. The seat will be open in 2023 and on the November 2022 ballot following State Sen. Will Haskell‘s announcement earlier this year that he would not run again and attend law school in the fall instead.

Boucher, a Republican, served as Wilton’s state senator from 2008 to 2019 before Haskell, a Democrat, won the seat from her in a closely-watched election. Prior to that, she was Wilton’s State Representative from 1997 to 2008. During her time in Hartford, Boucher was Chief Deputy Leader in the Senate and Assistant Minority Leader in the House of Representatives.

A press release issued Wednesday morning said Boucher’s “love of public service and of helping people” pushed her to get back into state government again.

“Helping others and making a positive difference in people’s lives,” Boucher said in the statement. “That’s what I enjoy the most. As a state legislator, both in the senate and the house, I built strong relationships throughout our area communities with so many caring, generous, and wonderful people. I’m also very proud of my record of bipartisan legislative policy accomplishments which have helped to improve the quality of life for people of all ages across Connecticut.”

She complimented Haskell as well.

“I tip my cap to Sen. Haskell,” Boucher said.  “He is hard-working, personable, and cares deeply about Connecticut. I wish him nothing but success and happiness as he enters a new chapter of his life.”

The 26th District was reconfigured in the most recent census-based redistricting effort. The district no longer includes Bethel; its eastern border grew to include all of Weston and Westport, and its western border shifted to shrink its portion of New Canaan while extending a narrow tentacle through Darien into Stamford.

Political observers say the changes, which take effect for the 2022 election, will benefit the Democrats in a district that was solidly Republican before Haskell won in 2018.

There has been much curiosity and speculation about who would enter the race on the Republican ticket. So far, three Democrats have declared as candidates, although only two currently remain: Wilton resident Ceci Maher, who has been a member of Wilton’s Board of Finance and led two non-profit organizations but has not held elected office as a state legislator; and Westport resident and attorney Ken Bernhard, who had previously served in the state legislature as a Republican but changed his political affiliation to run for the seat as a Democrat.

Boucher has name recognition in the district she once held, but says she plans on campaigning “tirelessly” from now until November.

“I truly believe I have a lot more to give back to the people of southwestern Connecticut,” she said. “If Democratic, [unaffiliated] and Republican voters put their faith in me again, I will work tirelessly for them as their state senator.”

“I look forward to reintroducing myself to voters,” Boucher said. “I am a listener, a coalition-builder and a problem-solver. I am also a mother, a grandmother, and someone with extensive private sector experience. I want to get off the sidelines and get back involved in improving Connecticut. I am asking for your vote in November, because I know I can again make a positive difference at the State Capitol. I will be your voice.”

Boucher has been a Director at Commonfund in Wilton, working in business development, marketing, research, education and professional development activities for private clients and nonprofits. According to her bio, she has held executive positions with Fortune 500 companies in the areas of sales, marketing and management, and was also a co-founder and board member of a marketing design agency specializing in high tech and bioscience. and was a principal of a mainframe software maintenance and consulting company. In addition to her private sector experience, she has served as a trustee and advisor on numerous nonprofits boards.