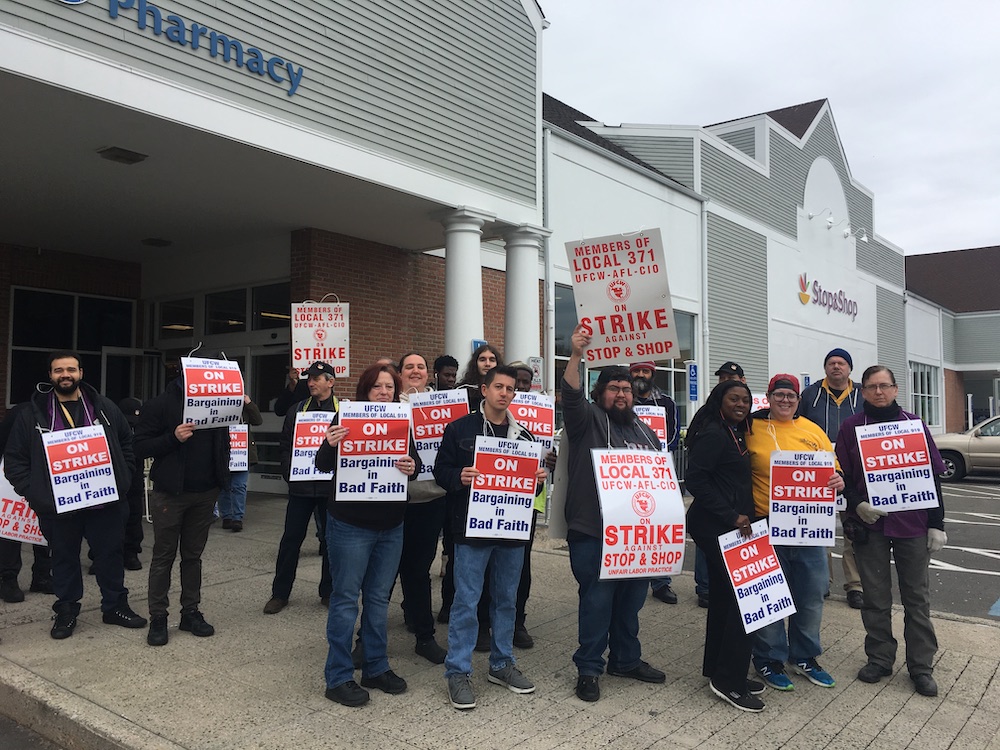 Employees at the Wilton Center Stop & Shop joined their 31,000 fellow unionized colleagues across Connecticut and New England on Thursday afternoon, walking out the front doors of the store at 1 p.m. to begin picketing. The workers have gone on strike after contract negotiations with management broke down.

The five United Food and Commercial Workers unions represent the supermarket chain’s employees in the New England region, all of whom have been working without a contract since February 23. Negotiations started in December but talks ended without the parties reaching any agreement.

“This work stoppage was a result of Stop & Shop walking away from the bargaining table,” said Mel Bartovic, the Wilton store’s produce manager who serves as the deputy union captain for the roughly 150 employees in the Wilton location. “We’re just looking for a fair contract for wages, health care and holiday time/Sunday pay.”

She explained that right now most employees are paid time-and-a-half for working on holidays and Sundays, a practice she says the company wanted to end. “Stepping away from our families to service you, our customers. Stop & Shop would like to take that away from us and make it a normal work day.”

Union negotiators were able to retain the overtime pay for full-time employees, but negotiations ended without part-time workers securing the same concession.

“Our part-timers, who primarily work paycheck to paycheck, will be losing that. That’s a huge issue.”

Entry-level store employees earn minimum wage, according to Bartovic. “Most [hourly] pay increases over the course of a contract range between $0.15 in a year to $0.25 in a good year. Over many, many years you could be making $12 or $13 an hour.”

Bartovic said she started working for Stop & Shop in 2005 making $7 an hour.

While many of the region’s stores closed their doors as employees left their posts Thursday, the Wilton River Park shopping plaza store remained open to allow customer access to the pharmacy and People’s United bank inside.

Store lights were on and customers who ignored pleas from striking workers to not cross picket lines were able to shop and use self-checkout lanes. “Thank you anyway. Please consider supporting us the next time you shop,” Bartovic called out politely as one man decided to enter after listening to striking employees explain why they were outside.

“We are asking customers to stand with us, to support us, to not cross our picket lines. To show us solidarity through this process. We know our customers do enjoy shopping with us, and we honestly do love to take care of you–without you we don’t exist. Without you, Stop & Shop doesn’t exist. We’re hoping this is over quickly so we can go back to taking care of you and you guys can shop here,” she said.

Bartovic invited Wilton residents to find out first-hand why the store employees were striking, asking them to consider showing solidarity with those waking the picket lines.

“Let people know that the people taking care of you deserve fair wages, deserve representation. My name is Mel, I’m your produce manager and I love taking care of you. I hate that this is happening and any support we can get we appreciate.”

With no employees inside at their typical posts, the registers stood idle, and the deli counter was vacant. A pull cart stood just inside the entrance laden with fixtures as if it had been left by someone in the middle of unloading it.

Those automated check-out aisle stood ready for customers, another point of contention for the employees outside picketing.

“More automated machines means less people to take care of you. The reason your lines are so long is they have machines and want to take the hours away from us,” Bartovic added.

In a back-and-forth chant–”What do we want?” “Contracts!” “When do we want ’em?” “Now!”–striking employees stood just outside both front entrances. Others walked in pairs at the main parking lot opening, wearing signs that said, “On STRIKE against Stop & Shop–Unfair Labor Practices.”

Managers of the Wilton store declined to comment about the strike, with one walking away from a reporter and refusing to provide any contact information for a corporate spokesperson.

A statement posted on the Stop & Shop website said that the company   is disappointed at the recent turn of events.

“Given that negotiations with assistance of the federal mediators are continuing, we are disappointed that the UFCW chose to order a work stoppage in an attempt to disrupt service at our stores. Stop & Shop has contingency plans in place to minimize disruption.”

The company said its proposals are “good and reasonable,” that include:

Stop and Shop described its proposal as “better than most recent UFCW contract settlements and responsive to heavy non-union competition,” and said the union contract proposals would increase company’s costs. “This would make our company less competitive in the mostly non-union New England food retail marketplace.”

The statement also said that Stop & Shop “remains ready and available to meet with the union locals at any time.”