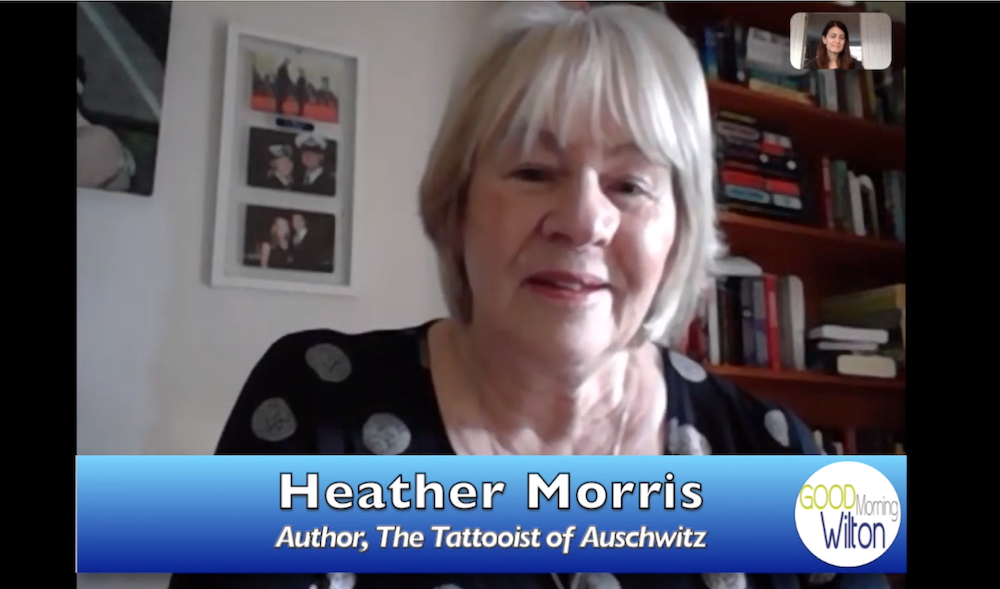 Today, the 2019 Wilton Reads program culminates with two Wilton appearances by Heather Morris, the author of this year’s book selection, The Tattooist of Auschwitz. First she’ll speak with students at Wilton High School, and later tonight, she’ll speak to a sold out crowd at Wilton Library.

Her book is an international and #1 New York Times bestselling work of historical fiction, based on the life of Auschwitz-Birkenau tattooist Ludwig (Lale) Sokolov. Morris wove the story based on multiple conversations she had with Sokolov over three years during which he was driven to make sure his story would be shared with the world.  It is a tale of hope, courage and survival in the face of horrors of the Holocaust.

From the publisher’s description:  “In April 1942, Lale Sokolov, a Slovakian Jew, is forcibly transported to the concentration camps at Auschwitz-Birkenau. When his captors discover that he speaks several languages, he is put to work as a Tätowierer (the German word for tattooist), tasked with permanently marking his fellow prisoners.Imprisoned for over two and a half years, Lale witnesses horrific atrocities and barbarism—but also incredible acts of bravery and compassion. Risking his own life, he uses his privileged position to exchange jewels and money from murdered Jews for food to keep his fellow prisoners alive. One day in July 1942, Lale, prisoner 32407, comforts a trembling young woman waiting in line to have the number 34902 tattooed onto her arm. Her name is Gita, and in that first encounter, Lale vows to somehow survive the camp and marry her. A vivid, harrowing, and ultimately hopeful re-creation of Lale Sokolov’s experiences as the man who tattooed the arms of thousands of prisoners with what would become one of the most potent symbols of the Holocaust, The Tattooist of Auschwitz is also a testament to the endurance of love and humanity under the darkest possible conditions.”

The book has provided Wilton Reads participants with a central theme for discussions on the Holocaust and the lessons to be learned from the events of WWII, as well as multiple events inspired by the subject. As Elaine Tai-Lauria, executive director of Wilton Library explained, she chose the book for the town-wide reading program to generate a community conversation about tolerance, prejudice and self-examination.

“With each passing day, we are losing the oral histories of Holocaust survivors and that cumulative voice of the generation that lived through World War II. Indeed, with the appearance of anti-Semitic symbols over the past few years, it seems that intolerance is seeping from the shadows. As they say: ‘Those who cannot remember the past are condemned to repeat it.’  It is therefore essential that we keep history alive and to pass on the learning to future generations.”

Morris spoke to GOOD Morning Wilton by Skype from her home in Sydney, Australia. It was just one day after the atrocities in Christchurch, New Zealand, where a white supremacist motivated by hate gunned down Muslim men, women and children in two mosques where they had gathered for prayer–50 were killed and 50 others were wounded. Christchurch was Morris’ hometown.

Only one day following the mass shooting horror, Morris reflected on the impact of telling Lale’s story, and the day’s events–and so many others like it–illustrate why the existence of her book is all the more important. She hopes that she can help others heal, make things right, possibly prevent, and teach, and she underscores just how important it is to tell and retell Lale’s story again and again.

“The evil he survived hasn’t gone away,” she says.

While the book is one with a critical lesson for humanity, it’s also a love letter Morris wrote for her friend Lale, to pay testament to his courage, his love for his wife, his survival and his existence. She says of the more than three years that she spent with Lale–hearing his stories and memories, meeting his friends, going to events, having coffee, eating meals together, and more, “I wasn’t there just to hear his story, I was there to be his friend.”

Heather Morris on her reaction to the attacks at two Christchurch mosques:

Heather Morris talks about one of the most important lessons from her book:

Through her work, Heather Morris has helped others heal:

Heather Morris on why one man’s story matters so much: