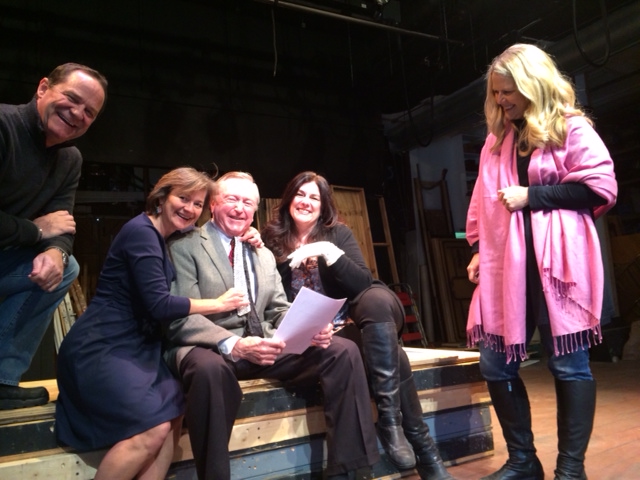 A dazzling cast of Broadway vets, professional actors and local standouts alike will take the stage at The Wilton Playshop on Saturday, April 5 for the theater’s bi-annual fundraiser performances.  Broadway:  Past, Present and Future will showcase theater luminaries from Broadway, London’s West End, National and Regional Tours, as well as students from Wilton High School.

With two separate performances (4 p.m. and 8 p.m.), the show features more than 20 musical numbers from Broadway classics and newer pieces. Two co-hosts will emcee:  Wilton first selectman Bill Brennan–perhaps drawing experience from the quote, “politics is theater,”–and resident Danielle DeCrette–who toured with Mickey Rooney in the national tour of A Funny Thing Happened on the Way to the Forum, appeared in Lincoln Center Productions’ Anything Goes, and performed at the 1988 Kennedy Center Awards, among other credits.

“I have been blessed to work with many talented people in my lifetime, and I’m thrilled to perform with some of my favorite friends again in this benefit. I’m most excited to share the stage with Bill Brennan. I haven’t been this nervous since I worked with Bob Hope or Mickey Rooney,” DeCrette said.

Audience members may become retro-actively star-struck when they realize that the performers they are watching are all local residents. Watching the performances, it may be awe-inspiring to realize that living in Wilton means possibly standing in line next to the Phantom of the Opera at Wilton Library, or run into  the same show’s lead “Christine” at CVS. Who knows, waiting for take-out at Pinocchio’s Pizza may actually be the original understudy to Patti LuPone in Evita. Wilton really is theater-geek heaven!

DeCrette said her love for the Playshop stretches back pretty far.

“I used to visit Wilton when I lived in NYC to see productions at the Playshop before I was married, then with my husband, and now with my children. When I moved to Wilton, Zelie (Pforzheimer, Playshop president) asked if I would be part of the first benefit. How do you say ‘no’ to that? The Wilton Playshop produces great local live theater experiences, period. Oh, and the cookies and coffee at intermission are a nice touch too.”

Caitlin Witty, a Wilton High School student who will also perform in the revue, has deep ties to The Playshop.  Her grandmother, Dandy Barrett, became involved with the organization in 1980. Not only did Barrett go on to perform in many productions, she served on the board in virtually every position, from house manager to president.

Ralph Pastore, Playshop board member and one of the benefit’s producers, explained how money raised by the benefit help defray maintenance and heating costs incurred after a harsh winter in addition to garden-variety costs associated with producing three top-quality shows per year.

“While our actors and crew donate their time, we use professional musicians who get paid. Set supplies, costumes, equipment rentals, paint … these expenses all add up. Not to mention the paper towels, the dish soap, the mints we put out — it takes money to provide all that glamour!”

The Playshop also offers a scholarship fund for budding area thespians.  High school seniors who continue their theater studies are generally fated for high rents and low-paying jobs, and this fund, created by individual and corporate donors, helps defray their costs of living while waiting for that big break.

Local theater pros Sarah Pfisterer and husband Rick Hilsabeck and their colleague Mary Jo Duffy–all veterans of the Broadway classic Phantom of the Opera—have a special relationship with The Wilton Playshop.  As founders of The Wiremill Academy, a theater and music school in Georgetown, they stage their productions at the Playshop, an experience they say is incredibly rewarding for the students.

“When we take the kids in here, it’s an amazing education for them not only as performers, because here they learn what it takes for a show to actually happen – from the sets to the lights to the sound,” Hilsabeck said.

“It’s also so exciting as an actor, to perform in a place and wonder who else has stood on this stage or touched this railing.   And this place is just steeped in history,” Pfisterer added.

The relationship between Wiremill and the Playshop is two-way, according to Pforzheimer.

“I always know when kids have been taught by our Wiremill friends.  They treat the Playshop with respect. They appreciate its history and show the backstage etiquette that is required when you’re sharing a tight space with other performers and crew.  We are delighted to host their productions,” she said, adding, “We also count on Wiremill to help us with our young actors.  At times, some of the children in our productions need a bit of extra coaching, and Mary Jo, Sarah and Rick are all wonderful with them.”

In May, Wiremill’s production of Honk! Jr. will be staged at the Playshop.  This show is currently open for registration to students in grades 4-8.  Rehearsals are three times a week from April 21– May 23, and performances will be held at The Playshop on Friday, May 30 at 7 p.m. and Saturday, May 31 at 1 and 4 p.m.. Click here to register.

The Wilton Playshop is located at 15 Lovers Lane.  You can purchase tickets here.